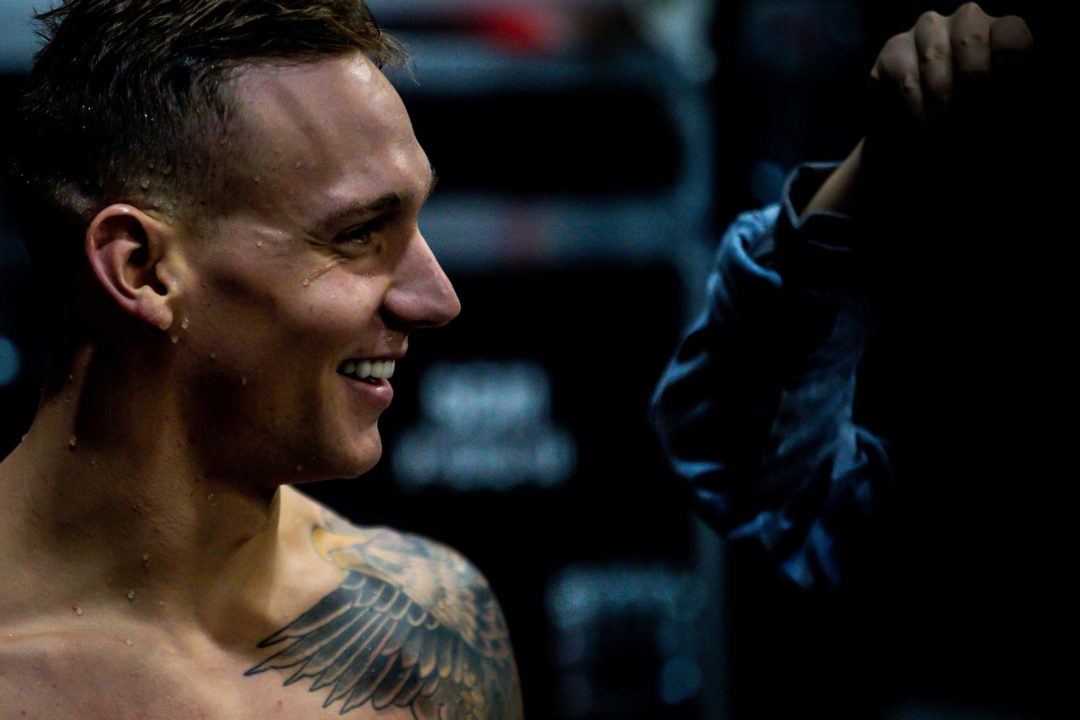 Caeleb Dressel recently posted a detailed analysis of his record-setting performance in the 100 butterfly at the 2019 FINA World Championships. Current photo via Jack Spitser/Spitser Photography

World Record holder Caeleb Dressel recently uploaded a detailed race analysis of his record-setting performance in the semifinals of the 100 butterfly at the 2019 FINA World Championships in Gwangju, South Korea to his YouTube channel.

The video, which is 17 minutes long, gives us the opportunity to hear Dressel’s thoughts on his performance in-depth. From the very beginning of the race, Dressel is critical of his actions and technique.

For all the hype around his start, Dressel states that he thinks he lifted his chin too much on his start in the 100 fly semifinal in Gwangju, causing his chest to drop slightly. He states that he enters the water “clean enough” though he thinks the swimmer in lane 7 did a better job entering the water as they had a smaller splash.

Speaking on his underwaters, Dressel notes that his entire body undulates as he dolphin kicks–a technique he shares with Ryan Lochte, whereas Michael Phelps kept his upper body still during his underwaters.

At 7:32, Dressel describes his stroke as looking “pausy” and “forced,” calling it “not a smooth stroke at all” over the course of his first 50, which he attributes to having too much of a pause between the first and second kick in his butterfly stroke cycle.

At 8:47, Dressel describes how he believes each stroke of butterfly should lead from into one another, a technique he describes as a “roll off.”

“Your shoulders are rolling off at the end of the stroke, back into the water. I hate to say down at any part of the stroke, so when I say rolling off your shoulder’s want to roll off, you want to feel that water roll off, as I say that way too many times, but it really is, and it’s not just I’m throwing my shoulders around, it’s the whole body working in unison to come to the end of the stroke. Have the shoulders roll off to just kind of lay down into that next part of the catch, and it almost looks like I’m just popping up and there’s not a clean transition between laying back down on top of that water, it seems like it’s a very up-and-down rigid forced stroke.”

Dressel states that he was probably a little too excited since he was chasing the World Record, which probably added to the bounciness of his stroke.

While most of us can only wish we could ricochet off the wall with the grace and power Dressel has, he describes his turn at 50 meters as “looking like a 9-year-old.” He notes that his timing into the wall was pretty good, but that his “arm could have hit the top of the stadium,” as he drops back into the turn.

Watching the second 50 of the race, Dressel remarks that his stroke looks better than it did going out, though he also recalls how badly this race hurt, giving us reassurance that he is mortal. At 11:20, Dressel states that he views his technique over the second 50 to have more of the “roll off” that he described a few minutes earlier.

Dressel notes that a race should hurt no matter what and that is something you should take pride in.

He wraps up by saying that he believes the kick and the legs are what drive the tempo of the stroke, but that the different regions of the body are not isolated and need to all work synergistically to achieve a balanced and efficient stroke, characterized by high hips and non-stop forward motion.

He said something similar in this interview. Maybe this sparked him to actually do the race analysis
https://youtu.be/oVEyihe0_OU

Is there any significant advantage to the whole body undulation a la Lochte/Dressel, compared to the upper body still technique of Phelps?

Piggybacking off of Steve, you’re always balancing force production and drag and it’s fairly impossible to quantify anything at the intersection of fluid mechanics and biomechanics (turbulent chaos on one side and tons of anatomical variation on the other). There is probably no way to give a general answer to your question.

Since everyone’s force production is different throughout their bodies, obviously those differences at each point in the kinetic chain are going to compound, so relative strength in abs, back, quads, hamstrings, calves, etc. become a huge source of uncertainty from swimmer to swimmer.

Then add in body proportions. Maybe it’s better for Phelps to have a more stable torso because his torso is so long, or maybe… Read more »

I want Dressel to treat the 100 fly the same way Peaty treats the 100 breast..

We need to get him the message that , and . allow you to go frame by frame on youtube for his next analysis. This was very entertaining nonetheless. Hope he does more.

Thinking about how fast Dressel will go at trials, I just realized (and with absolutely no disrespect to Dressel), despite being a double world champion in the 100 free, I find it weird that he doesn’t have a national title in the event.

Slight correction but he only holds the SCY record and American 100 LCM record. SCM and LCM is still held respectively by the supersuit era swimmers 🙂
Edit: Oh you said double world champion my bad

He set the SCM American record in the ISL Vegas Finale. Still just off that WR https://swimswam.com/caeleb-dressel-hits-american-us-open-records-in-100-free-scm-45-22/

Dressed won the 100 free at 2015 nats, albeit all the fastest swimmers we’re at WCs.

Oof, Im a goof. U right. He did win in 2015. I guess I was thinking of the years he was on the US team for big international meets.

The way he talks about his race makes it seem like he believes he can be significantly better. 48.9 one day?

I think it was clear by his immediate reaction upon finishing he was shooting for a sub 49. I have no doubt he’d be the one to do it.

We all have high expectations from him but we also should enjoy what’s he’s doing. I mean, if he doesn’t go sub 49 he will still be incredibly fast and that will not be disappointing.
He’s time is already ridiculous, how many freestylers can do it ?

And now we just need the bathroom stall reference.

Very cool of him to do this. I agree with his view that the turnover on all strokes apart from breastroke is driven by the lower body/legs. I was a decent breastroker and one common thing with the other good breastroke swimmers I knew is we were all pretty bad at soccer – moreso than most of the free of fly swimmers. Like they just had better lower body coordination or something. I was good at basketball and tennis though. It is a small sample size admittedly. At elite level I’m sure they’re all pretty rounded athletes.

When he talks about the importance of the second kick on fly I just nod my head and die inside a bit. I… Read more »

For breaststroke, in my experience, I believe the tempo is driven by the legs as well. An efficient, fast breaststroke has the arms in front when the legs start the kick, but arms have to wait until the kick is over to start the pull or else they are just creating drag and you aren’t getting the most of of the kick. To tempo up in breaststroke, you need to speed up the legs, whether it’s from a faster recovery of the heels to butt or starting the kick earlier in the arm cycle or even a smaller degree of knee bend of the legs. The arms can keep up, but the propulsion is from the legs so that is… Read more »