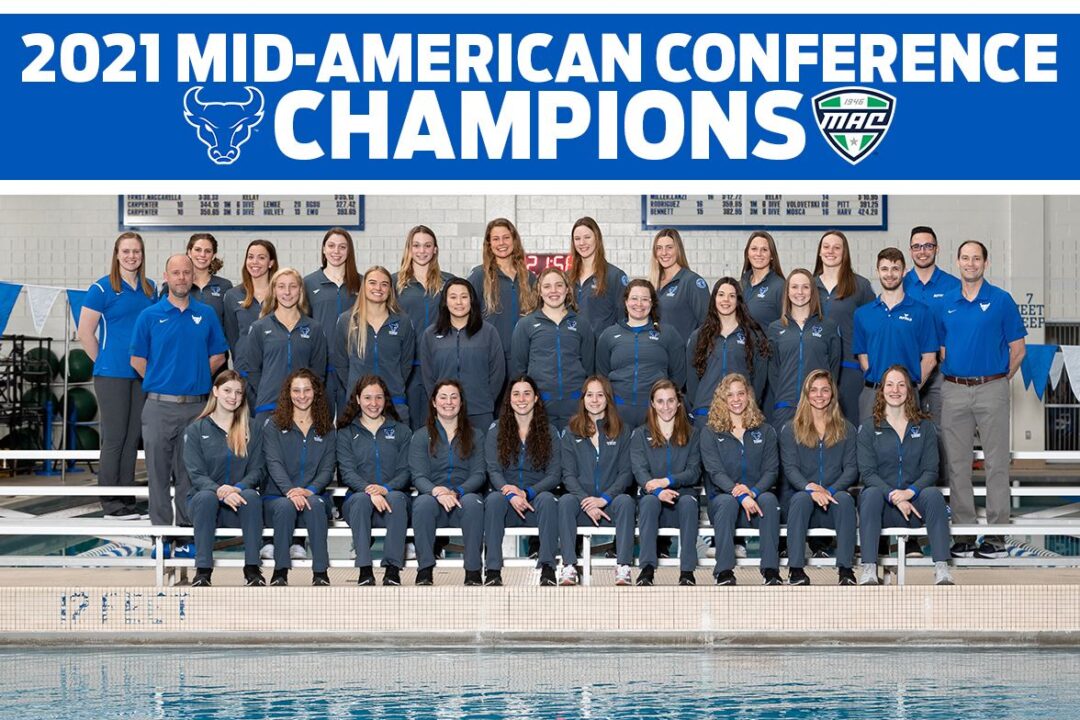 The 2021 Women's MAC Championships appeared to be heading towards a dramatic finish all weekend, and, oh boy, did it deliver. Stock photo via Buffalo Athletics

The 2021 Women’s MAC Championships appeared to be heading towards a dramatic finish all weekend, and, oh boy, did it deliver. The meet came down to the 400 free relay, which is the most exciting scenario for swimming fans, and one we had the privilege of witnessing at many conference meets this season. An insurgent Buffalo team had pressed the 7-time defending champs Akron to the max throughout the entire meet. Heading into the relay, Buffalo was leading Akron 733 to 732, meaning whichever team finished ahead of the other in the relay would be crowned the 2021 MAC champions. Buffalo got the job done, winning their first Women’s MAC title in program history, and snapped Akron’s 7-year win streak. The Zips were 1.26 seconds from MAC history, as both Miami and Ohio have won 7 consecutive MAC titles before, but no team has won 8 in a row.

The relay was very tight between Buffalo and Akron until the final leg, where yet again, Toni Naccarella was able to pull Buffalo away from Akron. Naccarella split 48.46 on the anchor leg, which was the fastest split in the field, although Akron got a 48.81 lead-off from Sarah Watson, which is comparable to Naccarella’s split. Also on the Buffalo squad were Jillian Lawton (lead-off 49.44), Ellie Duley (49.79), and Jenna Krull (50.07). Buffalo finished in 3:17.76, snapping a 5-year win streak in the event by Akron.

Toni Naccarella, who is a junior at Buffalo, was one of the two 3-win swimmers at these championships, with the other being Akron’s Sarah Watson. After taking the 50 free and 200 free titles earlier in the meet, Naccarella posted a 48.70 to win the event. The swim marks the 6th-year in a row it took under 49 seconds to win the MAC title in the 100 free. Buffalo also went 1-2 in the event this year, with Jillian Lawton posting a 49.18 for 2nd.

Sarah Watson also won her 3rd event of the meet, taking the 200 fly. Watson won Swimmer of the Meet for her efforts this weekend. Also a junior, Watson earned the award over Naccarella due to her breaking 2 MAC Records in addition to winning 3 events. In the 200 fly, Watson tore to a new personal best of 1:55.96, beating out Miami freshman Nicole Maier (1:57.54), who seemed unstoppable at these championships. Watson’s time broke the previous MAC Record of 1:56.49, which was held by her former teammate Paulina Nogaj.

Akron also picked up a win in the 200 breast, where Andrea Fischer touched 2 seconds ahead of the field in 2:10.86. The event was huge for Akron, as they went 1-2-3. Defending champion Paula Garcia touched 2nd in 2:12.89, while freshman Giovanna Cappabianca took 3rd in 2:14.92. 100 breast champion Katie Pollock finished 5th in 2:16.06. Another interesting note on the 200 breast: Garcia is the only swimmer from the A final who won’t be returning next year.

Daisy Platts, a Bowling Green junior, put on another backstroke show, winning the 200 back title in 1:53.67. The swim was a personal best for Platts, and was faster than she swam at NCAAs this year. 1:53.67 would have earned Platts a spot in the B final at NCAAs this year, to give an idea of just how fast her time was. Platts will return next year for her senior season, where she’ll have an opportunity to take another crack at the MAC Record of 1:52.94.

Ball State freshman Marcella Ribeiro pulled off a rare feat for championship meets. Ribeiro won the 1650 free from the first of the timed finals heats. It was a close call, but the 16:32.61 Ribeiro swam in the first heat withstood the rest of the heats.

Many congratulations to go around……………….

Congratulations to the Bulls, Coach Bashor, Dekker and staff. Your program has been surging for
years and has now been rewarded with the crown. Savor, enjoy and remember what
got you here.

Congratulations to the Zips. Eighth to first in 2014 was quite an accomplishment, then to win
an additional six times is unparalleled. Historically impressive in any sport
and an accomplishment that can never be taken away or tarnished.

Finally, congratulations to all the MAC programs and specifically all the ladies. You
found a way to persevere, to stay committed and ultimately were rewarded with
the opportunity to compete… Read more »

Shout out to Ball State on a great meet! Placing 5th for the first time in I don’t know how long is a great result! Also having their first medalists since 2014 and first champion since probably before that! Great job ladies and great job Coach J and staff! This program is moving in the right direction! Chirp Chirp!

The Bulls deserved this one!!! They are a class act team and bring much more than fast swimming to the deck.

Congratulations Buffalo! What an exciting meet! The MAC conference is very impressive-so many great swims!