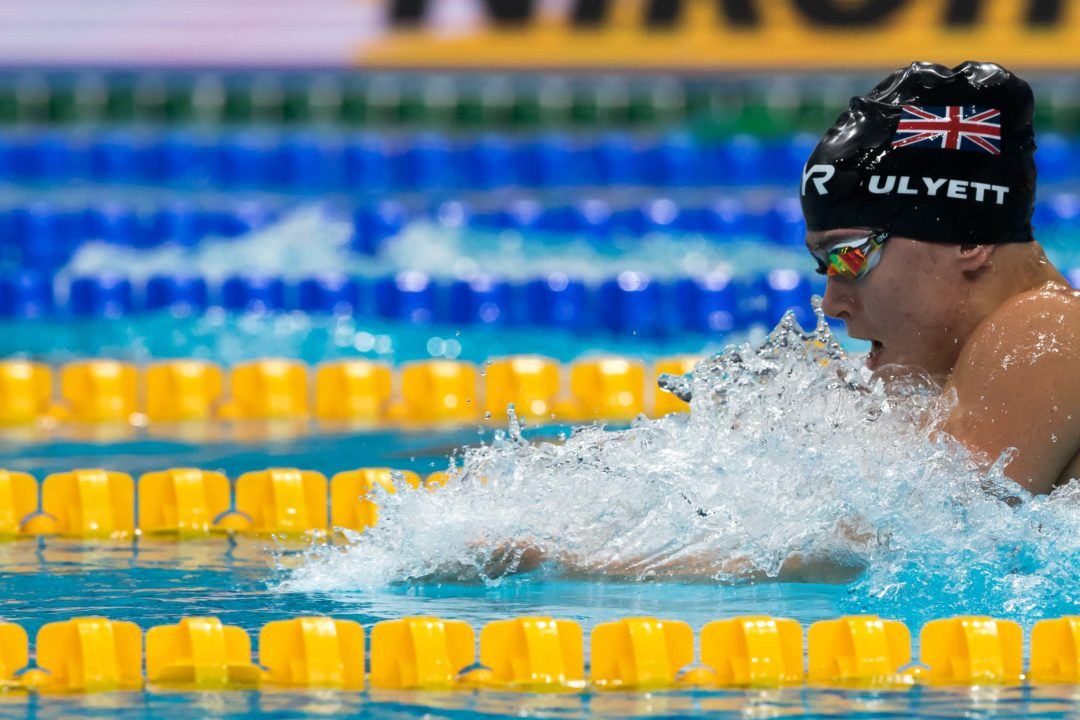 2017 British champion in the 200m breaststroke, Jocelyn Ulyett, made her mark on the BUCS Championships by earning a new meet record in the event here in Sheffield. Archive photo via Mike Lewis/Ola Vista Photography

Reigning BUCS Short Course champions Loughborough University leads the overall team points through day 2 of the 2017 BUCS SC Championships with 210 points. Stirling is currently holding the runner-up spot with 158 points, while Edinburgh sits in 3rd with 153 The final day of competition wraps up tomorrow at Ponds Forge in Sheffield.

We saw the first BUCS Records go down today, courtesy of racers on both the men’s and women’s sides. Edinburgh’s Kathryn Greenslade knocked down 2 by herself, starting with the women’s 200m freestyle event. Clocking 1:54.67 for the win, Greenslade notched the only time under 1:55, with teammate Lucy Hope finishing almost a second behind in 1:55.56 for silver.

Greenslade’s next victim in terms of BUCS Records was the 200m backstroke, where the Swim Wales athlete registered a winning time of 2:05.33 for a new meet standard, beating the field by over 2 solid seconds.

2017 British champion in the 200m breaststroke, Jocelyn Ulyett, made her mark on this meet by earning a new BUCS Record in the event here in Sheffield. First nabbing the top seed in a new record of 2:21.19 in the morning, Ulyett shaved off another .03 to check-in with a final mark of 2:21.16 to take the gold.

Edinburgh’s Hope was tonight’s gold medalist in the women’s 50m backstroke, collecting a new BUCS Record in the process. Stopping the clock at 27.07, Hope got her hand on the wall ahead of Scottish national record holder Kathleen Dawson, who settled for silver in 27.20.

Finally in the men’s 200m backstroke, 2015 European Games champion Luke Greenbank got the job done in BUCS Record-breaking fashion, nailing the wall in a new meet standard mark of 1:53.48.  Splitting 55.34/58.14, Greenbank earned his first title of the meet and threw some major points Loughborough’s way.

Yesterday’s gold medalist in the men’s 1500m freestyle, Olympic medalist Duncan Scott of the University of Stirling, was back in action tonight, collecting the victory in the 200m freestyle. He stopped the clock in 1:45.08 to successfully defend his title, although he was off his 2016 time of 1:44.11.

Runner-up tonight was Sheffield Hallum’s Joe Litchfield with his time of 1:46.34, while Tim Shuttleworth, who was just named winner of Swim England’s Performance of the Year Award for Open Water, earned bronze in 1:46.67.

Scott wasn’t able to pull off the double tonight, however, as Litchfield exacted his revenge in the 100m butterfly. Touching in 52.04, Litchfield was upgraded his 5th place finish from last year in the event to a shiny new gold, stopping the clock in 52.04. Scott finished in 52.66 for silver, while the only other sub-53 second swimmer, Kevin Wallbank of Loughborough, finished in 52.73 for bronze.

Did you know that 50 Breast sprint double act Beth Aitchison and Zak Aitchison are actually sister and brother? Quite an unusual feat 🙂

Interesting to see so many English swimmers racing for Stirling & Edinburgh – Perhaps a consequence of the narrow choice of top class Uni squads at home, due to Loughborough being so dominant?

No good ones though. Loughborough only take the best!