Breaking Down Day 1 of The ISL’s 2020 Season Opener 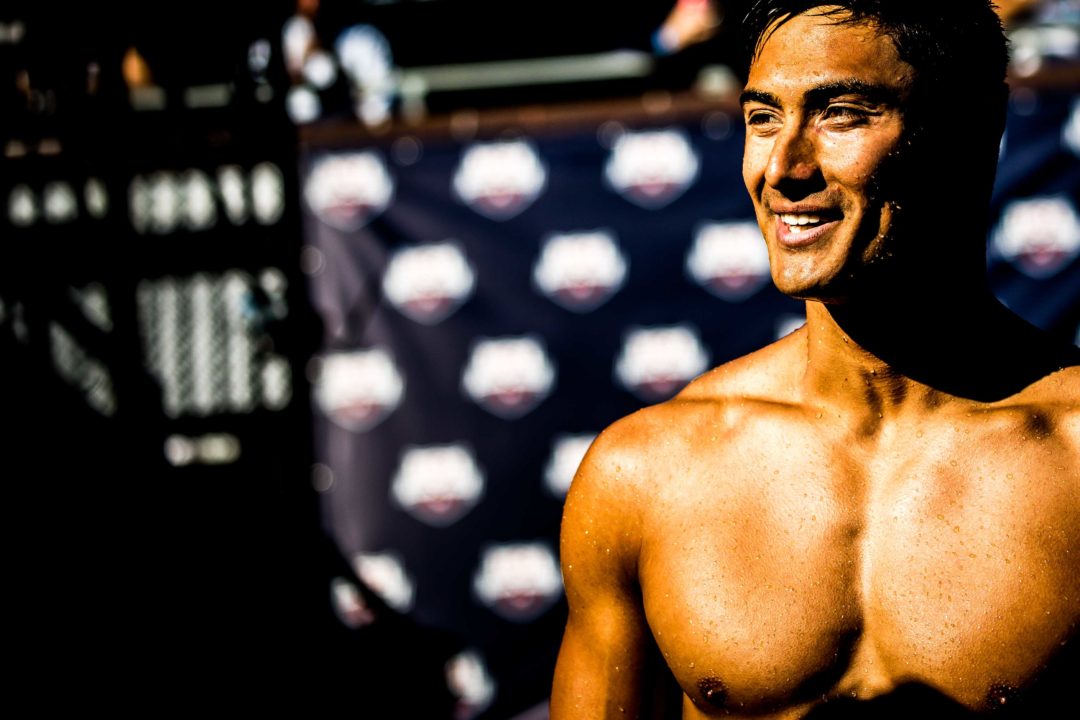 We break down some of the missed details in today's fast-paced ISL season opener, including a huge meet from Maxime Rooney. Archive photo via Jack Spitser/Spitser Photography

The 2020 season opener moved at a breakneck pace – and the lack of true live results left a lot of major storylines and developments overlooked.

We’re going back over the session for a few of the really notable storylines to check in on moving forward.

The LA Current won both men’s relays, and a big part was the strong swimming of Maxime Rooney. The University of Texas grad was on the cusp of some massive NCAA swims last year, but saw that meet canceled amid the coronavirus pandemic. He’s picking up right where he left off, though, in his professional debut. Here’s a look at all of Rooney’s swims today:

When Cali was Bad, they were Bad

When the new jackpot rule was announced, many saw it as a boost to the Cali Condors – who boast superstars like Caeleb Dressel or Lilly King, who can win by huge margins. But what no one accounted for was how the jackpot rules would hurt a Cali roster that is marked by peaks and valleys on the men’s side.

When Cali was good, they were good – and their women continued to be the powerhouse of the league. But the Condor men had a handful of brutal performances. Here’s a look at the worst events for the Condor men today:

That’s half of today’s individual events yielding a grand total of two points for the Cali men.

We mentioned Rooney above. But this is the first true class of ISL ‘rookies’ to come out of the NCAA and into an established professional league. This group is proving that the NCAA-to-ISL pipeline should be an impactful one in the future.

Here are a few of the top 2020 NCAA grads and their performances today:

Both swims were terrific for Small – we had her just 5th on the team’s 200 breast depth chart, but as a surprise entrant, she lived up to it. Margalis has been 2:18 before, but Small’s 4th-place allowed Margalis to remain fresh for her busy event lineup today.

These were solid swims for Brown in a busy day. Notably, her 53.0 in the 100 free came in her only single-session double today, a very quick turnaround from the individual 100 fly

Nelson focused in on backstroke today and was outstanding. A 2:02 in the 200 is going to make her one of the better options in the entire ISL now that Minna Atherton is out.

Weitzeil had a very busy day, including two swims (50 free and 50 breast) in the middle session. The latter of those swims was a bit disappointing, but Weitzeil’s relay splits were great. If she can become a 51-second leg, that bodes very well for LA’s relays moving forward.

Stewart was outstanding, and the Condors needed him to be after losing top backstroker Mitch Larkin. Stewart’s blazing 20.6 best time in the 50-yard backstroke converts to a 22-high, so his sprint speed appears to be firing on all cylinders. That’ll be big if the men’s skin race is backstroke tomorrow, as we expect it to be.

Pernille Blume and Jeanette Ottesen are two pretty big names in sprinting. But neither has really translated their reputations into commensurate ISL production. Last year, Ottesen was 140th in the league in MVP points, never breaking into double-digit scoring in any of her four meets. Blume was 104th, swimming in three meets.

Both have changed teams (Blume went from the NY Breakers to Energy Standard; Ottesen from the London Roar to the Breakers), but the production hasn’t picked up yet. Blume was just 7th in the 50 free today and Ottesen 8th. Ottesen was also 6th in the 100 fly.

Blume did have a solid 52.5 split on a winning 4×100 free relay. But the ceiling sure seems a lot higher for both than what we’ve seen so far.

Last year, one issue for the New York Breakers was how many events Michael Andrew had to contest to help fill that lineup out. Today, the Breakers tried to keep things lighter for Andrew, swimming him only in three 50s and a relay. But it didn’t translate to a lot of scoring, perhaps because the new event lineup crams the 50s of strokes pretty close together.

Andrew was 5th in the 50 free and 4th in the 50 breast in a tough session 2 double. Both are tough fields, but the 50 free is especially brutal in this week’s group of four teams. Directly after the break, Andrew had yet another event, the 50 back, and the tough session added up as Andrew was one of five athletes to have their points stolen to jackpkot in that race.

It’s hard to say what the best formula is for Andrew’s usage in this league. But with just 9 points in three individual swims today, it’s clear the Breakers have to find a better way to translate Andrew’s skills into scoring.

Energy Standard won the league last year. They also ‘won’ free agency, getting a few of the top unsigned names but also stealing some of the best athletes from rosters that were already weaker than Energy’s. Those free agent additions came up huge today:

Rapsys was originally on the Energy Standard roster last year, but withdrew to focus on the World Cup. He immediately put up a gamechaning time in the 400 free and looks like a massive addition this year.

Haughey was the MVP of the DC Trident last year, and it’s unclear how she was able to leave DC when the ISL said teams were allowed to ‘protect’ up to 8 athletes apiece. Stepping up to the Energy Standard roster means Haughey gets to swim an even lighter event lineup and the result was a huge near-win in the 400 free.

Lima was a top-50 individual scorer in the league last year for the LA Current, and he got to greet his old team today by taking second in the 50 breast, one spot ahead of LA’s top entrant.

We’re not sure how Pilato got away from the Italian team, which had otherwise snagged almost all of Italy’s top swimmers before they mostly withdrew from the league. Pilato is maybe the only threat to Cali’s 50 breast dominance, and came up with one of the best swims in league history today.

We expected LA to have a formidable sprint backstroke group with Ryan Murphy and Zane Waddell. But the sprint specialist Waddell did not compete at all today. We’re not sure if he’s in the mix to swim tomorrow or later on in the season, but the absence of his potentially-dominant 50 back throws a wrinkle into what we assumed was LA’s plan to win the medley and pick backstroke for tomorrow’s high-point skin event.

Another backstroke group that we picked as a standout wasn’t quite what we expected today. Energy Standard has two elite Russian backstrokers to go along with Olympic champ Matt Grevers (who only swam relays today). But Kliment Kolesnikov was way off today, scoring zero points  in two individual swims. Here’s a look at his results:

Kolesnikov never swam the 200 back in the ISL season last year, so it’s possible the event load wore on him a little as the meet went on. It’s also possible his 50 back was just an outlier, a bad swim from which he could bounce back tomorrow.

But it does leave Energy Standard with a tough decision. If the skin race does indeed go backstroke for the men (as we expect it to), Energy has to choose whether to swim Kolesnikov there after a bad 8th-place showing in the same event today, or pivot away from the long course world record-holder to one of its many (Rylov, Grevers, Manaudou) strong backstroke options.

I don’t like the jackpotting. It feels like it’s only increasing the disparities we saw last year; the rich get richer. I thought the minimum times they had last year was sufficient to keep people from sandbagging races, hopefully they go back to that next season. I literally screamed at my tv when Rowdy appeared. He’s a great person and wonderful ambassador for the sport over the years, but sweet baby cheezits we need some fresh voices. I’m more disappointed in this choice than the jackpotting, frankly. But all that said it was a fun 2 hours and I’m so glad it’s back. Fast swimming, lots of action. I do not understand the haters here. Sure there are flaws, but… Read more »

You make some good points but I think it just makes it more interesting and more competitive. If it wasn’t for the jackpot the NYbreakers would probably have 78 points and not 178 points. But anyway GO CONDORS!

Maybe Braden and team will give us a breakdown after tomorrow showing what the scores would have been without jackpots…. I’d love to be wrong on this. If it adds more parity, then I’m on board. It IS exciting and fun to see your team score big (what up Lilly King!) and could add extra intrigue towards team standings at the end of the meet.

I love you. I knew I could count on you. And these sentiments are in no way influenced by the cocktail I had with supper. Y’all are the best.

Speaking of Condor breaststroke struggle bus, where is nic fink? He should have been able to contribute (and hopefully not get jackpotted). They are going to need to figure out how to compete there if they want a chance to start being competitive in the medley- 59 splits aren’t cutting it. They had the two slowest breast splits of the field.

They are not robots . They ar e humans who have had varying training opportunities due to cv19. Sheesh.

‘Swimming MA only in 50s’ is standard operating procedure…