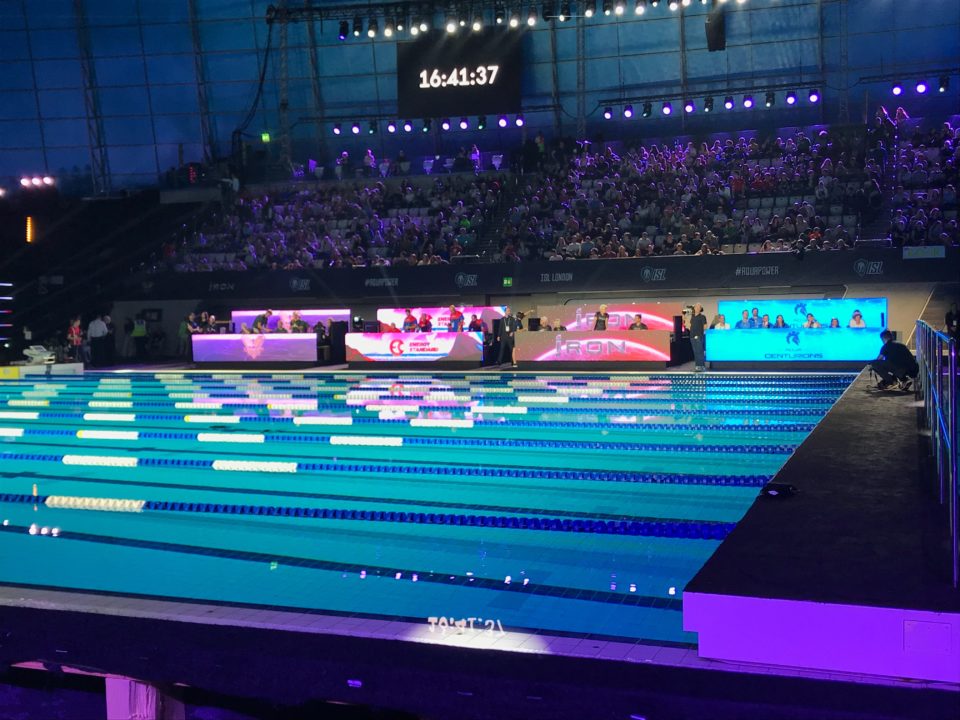 In a live Facebook interview, International Swimming League officials shed some light on the recruiting/roster-building process for the ISL's second season. Stock photo via Lydia Ferrari-Kehoe

In a live Facebook interview, International Swimming League officials shed some light on the recruiting and roster-building process for the league’s second season.

The eight returning ISL franchises were each able to ‘secure’ or ‘protect’ 8 athletes, keeping them on the roster for the 2020-2021 season. At the same time, the two new franchises got about a month of priority recruiting in their home countries – the Toronto franchise had exclusive rights to negotiate with Canadian athletes and the Tokyo franchise exclusive rights to Japanese athletes. After the month was up, all athletes were free agents and all ten franchises were able to compete to recruit the same pool of athletes.

The defending champion Energy Standard team has been announcing athletes on its roster, but the parameters of free agency were still unclear, though we’ve been asking the organization for information since early January. However, ISL officials revealed the concept of protecting athletes and exclusive recruiting for the new franchises in the video interview on the American Swimming Coaches Association Facebook page.

A few other notes from that Facebook live session, with details we’ve been able to gather for context:

Skin Races of non-free strokes: Tsagkarakis couldn’t reveal specifics, but hinted that the multi-round skin races would feature strokes other than freestyle in the 2020-2021 season. One ISL athlete has told SwimSwam that one plan is that the team that wins the medley relay on day 1 gets to pick the stroke of the skin race on day 2. So the winner of the women’s medley relay gets to decide the stroke of the women’s skin race the following day, and the men’s medley winner would get to pick the men’s skin stroke.

Potential for no spectators in 2020-2021 season: Nitz noted that due to the coronavirus pandemic, there’s a strong possibility that the second ISL season would have to take place without spectators. That’s a possibility in all professional sports at the moment, with large group gatherings perhaps outlawed for a time as the world starts to chart a return from quarantine and shelter-in-place rules.

No location yet for 5-week training camp: The ISL still plans to condense its 2020-2021 season into one five-week training camp in which ISL athletes all come together and train in one place, with the season’s competitions held within that training camp block. ISL organizers see the training camp as a way to create lots of content with their athletes, showing athlete interactions away from the pool as well as the behind-the-scenes strategies and team preparations for ISL meeets.

There’s no location yet set for the 5-week training camp, as the pandemic is making it difficult to lock in a commitment with a host. But the ISL is talking to potential hosts in Australia, the U.S. (the Florida area) and Japan and likely won’t choose until summer.

Return to proposed 8-month, 27-meet format for 2021-2022: The ISL plans to push its originally-planned 2020-2021 format to the 2021-2022 season, directly after the rescheduled Tokyo Olympics. The ISL had originally announced a massive expansion for its post-Olympic season, with an ISL season running from September through April and featuring 27 meets including a regular season, playoffs, and a final.

I’m guessing that breaststroke and backstroke are going to be the most commonly picked strokes. Teams are going to want to avoid butterfly and freestyle because of Dressel.

He can Probably fake a short course 50 back..

I mean with the man’s starts and underwaters, breaststroke is still an iffy choice. Remember he was the US open record holder in the 100 breast for a couple weeks. I think they’ll have to go backstroke, but last season Cali had Larkin, Ress, and Shebat, who are all fantastic backstrokers.

He did breaststroke last year and got his teeth kicked in.

The extra couple of metres he has to swim as opposed to start turn and underwater already makes a difference, and frankly the American breaststroke men are probably the weakest group of American swimmers at the world level.

That doesn’t mean they aren’t all exceptionally good swimmers, but I don’t think any of them have been consistently high level internationally since Hanson up to 2008. Shanteau was good about the same time, but cordes never performed really well internationally, and Miller has been inconsistent.

Not a bad guess – though Dressel won’t swim at every meet.

That also presumes that the Condors don’t win the medleys and get the choice (if that method holds up).

What I think last year’s finalists would pick:

Why would London choose breaststroke when Peaty didn’t even win all the 50br
How about Guido???? Backstroke

We have to bear in mind that results in the individual 50 are not necessarily indicative of the results in the skins. Once you get through the first round it doesn’t become about who’s the quickest anymore it’s about who has the better endurance so for all we know Peaty could be a better pick than Guido for London Roar.

Yes this was precisely my thinking. I felt that Peaty would be able to hold his speed better, relative to his competitors.

Also worth noting that Energy/LA are also really strong at backstroke, and there’s no guarantee that Guido would make the top 2 against Rylov/Kolesnikov/Murphy/Grevers/Larkin. Whereas most of us would bet on Peaty at least making the final 2.

Nice to see them making things a bit more clear with selections and skins. A step in the right direction at least.
Admittedly, a 5 week program isn’t the most enticing but I guess something is better than nothing.

It honestly feels like they’re making these rules to help energy standard win at all costs…now they get to avoid Dressel in a free/fly skins race?

Yea…no. Go to the Isl YouTube channel and sort by most viewed and see which swimmer overwhelmingly dominates.

Sjostrom won women’s skins. ES went 2-3 in men’s skins. It’s not like ES lost many points because of Dressel.