The International Swimming League will add teams in Tokyo and Toronto in its second season, expanding the league to 10 teams, the organization announced at a press conference Saturday following the inaugural ISL Grand Finale in Las Vegas.

“I am delighted and truly excited to be part of elevating the value of the sport of swimming in a global context,” Kitajima said. “The opportunity for swimmers to succeed in the professional arena is something that most of us have only dreamt about.”

The 2019 ISL season saw just two Asian swimmers participate: Japan’s Daiya Seto, who debuted at the finale and set a world record, and Hong Kong’s Siobhan Haughey, who is based in the United States. Thirteen Canadian swimmers participated in the first season – including Olympic champion Penny Oleksiak and multi-time world champion Kylie Masse – and the league struck a deal with CBC Sports in Canada to provide broadcast and streaming coverage throughout the season.

“The International Swimming League must be a truly global one but our development needs to be sustainable, so we are delighted that we are able to announce that one of our two new clubs for next season will be in Tokyo – the global capital of sport in 2020,” ISL founder Konstantin Grigorishin said. “Japan is one of the world’s leading swimming nations with a large fanbase so we expect to see a very competitive team be developed there and many fans excited to learn of our plans.’’

“This is only part of our development strategy, though, as we also see our responsibilities and opportunities in the areas of sustainability, inclusion, integration and the green environment by working together with our new franchises, including in Toronto, in the area of mass participation,’’ Grigorishin added, regarding the Canadian expansion.

New teams will have a priority recruiting window on natives of their home nation.

The second season is scheduled to see the number of meets nearly quadruple from the first: the 2020-21 calender will feature 27 meets running from September to April, according to the ISL. The expanded format will include a regular season, playoffs, and a final. Teams will be split into two regions: Euro-Asia and America. The league is considering advancing the top four teams to the final, regardless of which region they’re based in.

Though no venues have been named, that timeline falls just after the 2020 Tokyo Olympics, which will feature the brand-new Tokyo Aquatics Centre — slated to have a capacity of 15,000 and be used to host “domestic and international competitions” following the Games. Toronto is home to the five-year-old Toronto Pan Am Sports Centre, which features two Olympic-sized pools and seats 6,000.

Interestingly, ONEflow, the second-ever ISL team announced, will not be included in the 2020 expansion — despite indicating in April it would be. The league announced ONEflow in January when all indications were that it would attempt a 12-team league (six in Europe, six in the United States) for 2019, but ONEflow later posted on Instagram that its launch would be postponed because of “strategic and financial reasons.”

8
0
Reply
Jeff
Reply to  NOT the frontman of Metallica

Will a Tokyo team attract Chinese swimmers? Or are they already pretty well-funded by their federation?

I don’t really know anything about Chinese swimming, but I suspect there’s also the question of whether their federation allows them to participate as well.

Interesting !! Would be interesting to see what guarantees were given to “foundation” teams as regards survival beyond season one, particularly given the relative weakness of DCT & NYB, particularly with the incoming Toronto team. Conceptually, I’m very much in favour of expansion and in particular new “markets”/teams entering the equation (Asia clearly a must) but unless the 2 weaker US based foundation teams have a massive overhaul & upgrade, I can see at least one folding post season 2. The Euro (now Euro/Asia) bracket is significantly stronger with ENS/LON & Iron all competitive AQC will still need to upgrade significantly to survive but I still see them as stronger than at least NYB. WILL be interesting to see (1)… Read more »

The U.S. is obviously the strongest and deepest swimming nation if we are just comparing nation-to-nation, but they are nevertheless spread way too thin across four teams (compounded with the whole thing where college-age swimmers and younger can’t participate because of the NCAA), hence the weakness of DCT & NYB and why LAC and even CAC don’t hold up too well against the strong Euro teams who have swimmers from a greater variety of countries. I would say 3 U.S. teams maximum to stay competitive, and they need more talent from other countries.

You hit the nail right on the head. A very significant % of that US strength is tied up in NCAA during the ISL season and thus unavailable. The current US based team will really need to reassess their recruitment strategies, even putting aside Toronto entering the equation. Were some too slow off the mark leaving themselves underdone with regards to major hitters ? Were some teams a little insular in their recruiting in not looking outside the Americas ? Therein lies the trap for ALL teams including the newcomers. Whilst there is a legitimate marketing angle catering to the locals by stacking one’s lineup with the ‘local product”, is the spread of local talent sufficient for you to be… Read more »

I hope each team will be diversified in nationalities, like Energy Standard and Iron. It’s not interesting to see competition among national teams in ISL.

Just out of curiosity I calculated this using a diversity index formula: 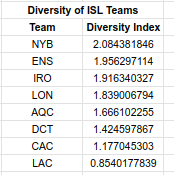 This was based on each teams most recent starting roster.

They need a proper draft instead of having four awful teams

Grigorishin probably hates this idea given ENS has existed as a club since long before ISL.

No use in trying to push this league if hes going to put his personal interest in having the best team above the betterment of the league.

Agreed. I think there’s a bit of a conflict of interest between him being president of the league and also having his own team in the league but I guess without him the league wouldn’t exist so …

Yeah, but without his money, no way the league survives. Attendance at the final was pitiful, they don’t have a major TV deal, merchandising was probably weak. Frankly, I don’t know how it survives once the star athletes start demanding star level money. This year makes sense for the stars, because it’s free marketing in their Olympic year when all the major sponsorship deals are struck. Off-Olympic years, maybe some do it for the fun of it, but if you’re Ledecky with a $7M contract already, of whatever Dressel is going to end up with, why do you swim these? Losses only ruin your personal brand.

You will swim meets anyway. Why not get paid to swim? More fun to swim against Titmus in Japan and get paid then swim at some meet in Iowa.

And holy moly, 27 meets?? I feel like a lot of swimmers would be skipping some meets due to the sheer quantity and travel involved? So are they going to have larger overall team rosters?

> New teams will have a priority recruiting window on natives of their home nation.

What does this mean for the Toronto team? Can they take all the Canadians spread across the existing teams, or…?

Yea the rules are a bit unclear. Do all swimmers become free agents again? How can they just begin to absorb Canadians across different teams like that?

Would be great to get some clarification on this. I’d guess that swimmers can switch teams so recruiting will have to happen again. We’ve seen that almost all the Americans are on American teams, so maybe we can speculate that most of the Canadians will choose to join the Canadian team. Though this hasn’t held true for some countries like Great Britain, which has a fair number of swimmers not on the London Roar team.

I think part of the reason for that is Rob Woodhouse. If he fills the team with a lot of Australians there’s less room left for Brits. Also any swimmers already associated with ENS pre-ISL were always gonna stay there.

Makes sense. They’ve been interviewing Mel Marshall so much that I forgot he managed the team. And that he’s McKeon’s uncle! I guess he used those connections to get the Australian swimmers.

Wow, London Roar could’ve renamed themselves Brisbane Roar and that would’ve more accurately reflected the composition of the team.

Hah, I was lumping the Gold Coast in with Brisbane, but maybe that was too bold of me? Must be my Brisbane bias showing through. The Campbells are in Sydney now, but they were in Brisbane for the majority of their careers. Let’s go with Queensland Roar, yeah?

The swimmers were contracted just for the first season so all swimmers are free agents again. Just because each team gets first dibs on athletes in their own country doesn’t mean those athletes can’t wait until the recruiting window is over to go elsewhere.

Well a big pro for the US teams is that they get an influx of talent every year. And most of them will congregate today Cali or LA. There really should be a Russian team if we’re adding a 5th North American team, but that would completely gut Energy Standard and Grigori isn’t gonna go for that.

Will be interesting to see if Asia really gives it a go.

If the ISL is a no doping league, how the hell do you go with a Russian team after the latest WADA report? I get that Grigori says it’s individuals and not nations, but they’ve got the Shields/MA/Hosszu FINA lawsuit still in the game, and FINA’s big argument is that they’re the only ones who can keep the sport safe for the athletes through their doping controls. Take on a Russia team and that case is lost. Plus, doubt Grigori wants to do anything for Russia since he’s on their Ukrainian sanctions list from 2018.

They’re going to end up banning themselves.