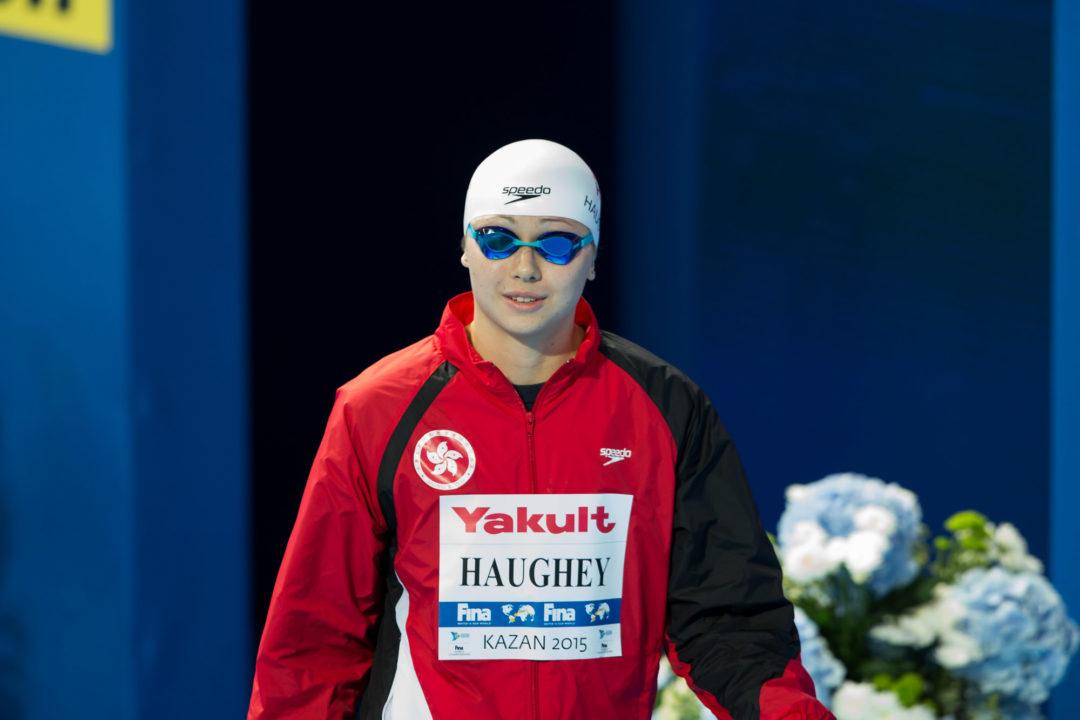 On the heels of Siobhan Haughey breaking her own Hong Kong national record in the women’s 100m freestyle last night in Des Moines, the 22-year-old former Michigan Wolverine has been announced as the newest member of Energy Standard‘s International Swimming League (ISL) squad.

Haughey was the top individual scorer for the DC Trident last season, and the 4th-best scorer in the league among swimmers who didn’t race at the finale, double-points championship meet in Las Vegas.

Haughey picked up 4 season event wins, including going a perfect 3-for-3 in the 200 free with the league’s fastest time of 1:51.99 in College Park.

“Our second swimmer for today is a new addition to our team, although she was dominate [sic] in the league last season, going undefeated in the 200m freestyle. From Hong Kong @siobhanhaughey01 🇭🇰 Welcome to the ISL Champions 🏆 @energystandard ⚡,” read the Energy Standard Instagram post dated March 6th.

Haughey competed for the DC Trident squad during the inaugural ISL season. The Trident finished 2nd-to-last in the American half of the bracket, scoring more than the minimum only via a 3rd-place finish at the U.S. Derby ahead of the New York Breakers. She’ll join a club in Energy Standard that won last year’s league title with a women’s roster that included the likes of Sarah Sjostrom, Emily Seebohm and Femke Heemskerk.

Season 2 of the ISL is expected to bring two additional new teams, with a significant increase in the number of meets from 7 to 27, running from September to April.

Haughey, who was 4th at the 2019 World Championships in the 200 free, broke her own Hong Kong Record in the 100 free in long course on Thursday evening at the Pro Swim Series stop in Des Moines, Iowa.

Our second swimmer for today is a new addition to our team, although she was dominant in the league last season, going undefeated in the 200m freestyle. From Hong Kong @siobhanhaughey01 🇭🇰 Welcome to the ISL Champions 🏆 @energystandard ⚡ #aquapower #isl2020

I almost wish that the ISL went with a draft-style format for the participating swimmers. This is so stacked, but congratulations to her!

Totally agree. This free agent at any time will build some super teams and will hurt the ISL pretty quickly.

ISL needs a commissioner quick, can’t have all the talented swimmers on one roster, need balance for good competition, especially if you want eyes from people who don’t usually watch swimming, won’t be as entertaining if one team is loaded.

ISL needs a lot of things quick. They’re limping into their new season without addressing a lot of the issues from year 1, like league balance.

There is a salary cap and a roster limit for S2

It’s ISL audience to keep or lose after an Olympic year. Season 2’s success will make or break the league more than any other season

I feel bad for DC Trident. It is unfortunate that their star player was disloyal and joined the other team just to “win”. If you join a team, you should have the common decency to stick with them, despite offers from others. But I guess if you want to be a shark, be a shark.

If you want the swimming rosters to be “free agents” like the NBA, NFL…etc. Swimmers should be able to sign(join) the team the desired to be at. This will create competitions between managers and their teams. Now the problem is that leagues like NBA and NFL has salary cap, so one team can’t sign all, as I’m not sure how ISL work with salaries.

If she remains on DC she does not go to the finals and have a chance to win. She is not a shark just doing what anyone would do when they are a professional athlete that needs to make a living.