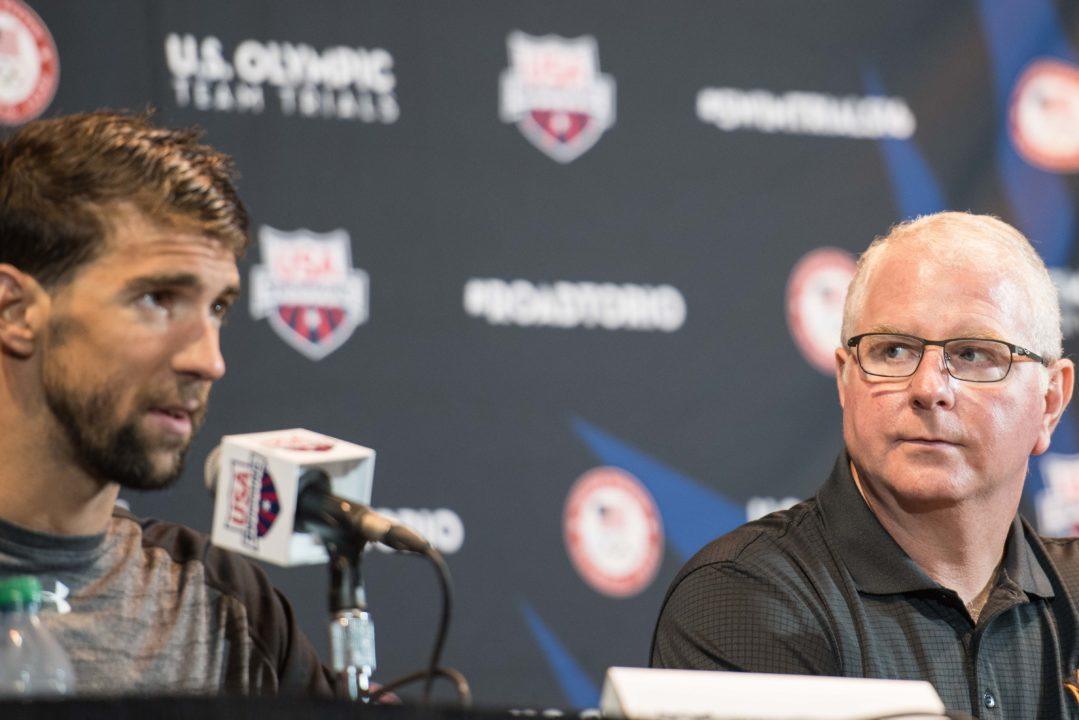 At the recent convention of the American Swimming Coaches Association (ASCA), Arizona State coach Bob Bowman delivered remarks focused on how he prepared Michael Phelps for the Olympics in 2004, 2008, 2012, and 2016 Archive photo via Mike Lewis/Ola Vista Photography

At the recent convention of the American Swimming Coaches Association (ASCA), Arizona State coach Bob Bowman delivered remarks focused on how he prepared Michael Phelps for the Olympics in 2004, 2008, 2012, and 2016. Bowman shared images of the hand-written workouts he prepared for Phelps (and some of his other athletes, such as Allison Schmitt) – 7, 14, 30, and 60 days out from each Olympics. A number of those workouts can be seen below.

In the course of his remarks, and during the Q&A session, Bowman shared a number of interesting nuggets:

I am just a novice swim follower so what do the experts on this site say about his training regime in the slides?

I will always be disappointed that we weren’t able to see the times Phelps could have put up between 2008 and 2012 if he fully trained!

The slides show his taper workouts were real short. He was doing some sets to try to simulate his goal times.

I assume it stops 60 days out from London b/c that was the last practice he did.

My takeaway from this: if Phelps did 3/4 of the work in 2019-20 as he did in 2015-16, he could easily make the US team in the 200 IM. (I’ve also already factored in the age thing as well.) His knowledge of all the little things would make up for his loss of strength and endurance due to age. It would be like Jack Nicklaus winning the Masters at age 46 (in 1986) because he knew the course so well.

Swimming is not golf.

True enough, Caleb. But the mental part of both sports is huge. Phelps’s demeanor in the ready room before the 200 fly in Rio was worth at least a second over his competitors (especially Chad and Lazlo).

Yes yes, but even in 2016 Phelp’s turns for 200 fly were like an age grouper. I think he needs to be committed at his age to win gold. He doesn’t have the insane base that he for London. Just qualifying for the Olympic team and failing at Tokyo wouldn’t be what he wants if he were to swim again. Give it your all or nothing.

He’d need to give up the 200 fly. You’re right about the base he’d need. 200 IM, 100 fly (hope for a prelim slot). Just don’t see him doing much more. The other decay curve (beyond age) is the training decay curve that’s now going on 5 years.

Eh he went 47.1 in London as well. We see terrible turns in Rio, as I said. I think he may have been able to squeeze a couple more days of taper though. He was having shoulder problems before Rio.

The most important part is he doesn’t seem to want to. A lot of athletes continue in their respective sports past their prime, ie. Venus Williams, Roger Federer, but it’s because they love it.

Well Phelps did love it. He did say he would probably go to 2020 if it wasn’t for his chance of getting injuried. He almost got injured for Rio. He had 2 cortisone shots.

Yes indeed, he gave 20 years of his life to swimming, and he did it !!! The Greatest swimmer of them all !!!
Phelps is the Champion for us and good example to all. He went in as working hard and talented person,
and human been please remember that, it is easy to talk about,the questions is do you have a gut to do it? And there no one will beat him only the time ……

Have you averaged in his bad shoulder, bad back, and 1.3 kids?

Meet management is an important topic.

Phelps and Bowman really excelled at that in 2008 at the Beijing Olympics, where he competed just about every session. So many warm-ups, races, warm downs, and medal ceremonies to deal with.

I think Nathan Adrian said that the rest of the USA team hardly saw MP because he was being hustled around the whole meet with his heavy schedule of races.

He built up a based over the years. So, he could do less yardage going into London and still swim pretty good.

Yes, but that base is gone now. The base he built for 2 years would pale in comparison to 2008, and now if he came back he would probably start back to 2014.

Absolutely right. He’ll not be able to reproduce Rio, and more likely will decay through age and training absence. He should stay retired.

Assuming Fly was off blocks. Back was most impressive. 1:47.1 total. Just insane.

I still think Phelps missed his Rio taper. He was in “world record shape”.

I don’t know if he missed it, I mean, dude was 31. What he did was freaking impressive and unprecedented in swimming in Rio. If we break down his races we do see errors.

But taking his swim in Rio

He lost the 200 fly in 2012 not due to a lack of training, but poor turns/finishes. He could have easily shaved another second off that race with better turns and a good finish. That would bring him a textile best after not training a single stroke for the event in four years. Insane. If he had trained consistently for London there’s no doubt his WR would… Read more »

The bad turns in the London 200 fly were in large part from poor (if you can call getting an Olympic silver poor) endurance. We all know the feeling of resting on turns when it starts to hurt. No way the well-trained Phelps would have lost on the last turn.

I wonder about the extra muscle mass too. You can’t change the laws of physics, more muscle mass, less buoyant in the water.

Well I think the main part is that he was 31. He almost injuried himself so he needed 2 cortisone shots.

The 200 IM was late in the meet, and he had to be weary. Comparatively, he crushed everyone else, and had it been the first event, he would have come close to breaking or would have broken the record.

The at-his-best Ryan Lochte and the at-his-best Phelps never really competed head-to-head in the 200 IM. Lochte was best in the off-Olympic year, although his 400 IM at London was brilliant. He either was over-trained (all that strongman stuff), had comparatively (to Phelps) poor meet management, or just wasn’t capable of the big schedule at London.

I really thought that was the WR that would come down. Wonder if it would have if the race had been closer.

I agree. I was on WR watch for the 200IM in Rio, but I think the difficult timing of the meet for US prime time audiences prevented it. There were some odd swims across the board, especially note how everyone uniformly died in the 200 fly. I don’t know if it was the humidity, timing, pool water or what, but I sensed Rio had its issues. I think it ultimately helped MP. I don’t think he went into Rio expecting 5 gold and a silver, but he was probably best suited to handle adverse circumstances. His times didn’t meet his goals, but his medal count exceeded, so a still a wild success for the goat.

One factor in the Rio 200 fly may have been the starter pulling them off the blocks (I believe because of crowd noise). The swimmers had to sit with their adrenalin spike instead of using it on an immediate start, and Cseh and Le Clos, for example, had an unwelcome chance to think about the pressure instead of just getting down to it.

Yes, that definitely affected the race.

Sorry for my lack of knowledge but what does a broken mean? And what does :50 mean? Thanks

Something interesting to add, before Rio, Phelps had two cortisone shots

They have a unique relationship. I don’t think many swimmers have a “100% honest” relationship with their coaches.

Maybe when you become the coaches ticket to the Olympics or WC, you can speak up more for what you want.

Otherwise, you can get thrown out of practice (or off the team)!

Add to that Bowman’s role as a substitute dad. He taught him to drive and tie a necktie. Those are things parents do. Now Phelps son carries Bowman’s name. Definitely a special relationship.

Anyone know how to find the full presentation?

The real pity is the quadriennium between Beijing and London, and it’s incredible thinking that Phelps is clearly the Goat in Swimming northeless the lack of motivations in so many good years of his career (already seen after Athens2004 and his first Dui).
What if Phelps had planned, for instance, two great WRs per year among 2009 and 2011, with a “human” schedule of races like at Worlds2009 (3 individual races)?
Useless to debate “what if”, whilst would be more interesting to read some news about Phelps’ desire to train the 100 free and making stages with the Auburn crew.
What happened?

Interesting idea. All of the “what ifs” ….I’ve wonder what he could have done with the 400 fr had he trained for it. He certainly had the capability of doing something special.

And then there’s backstroke.