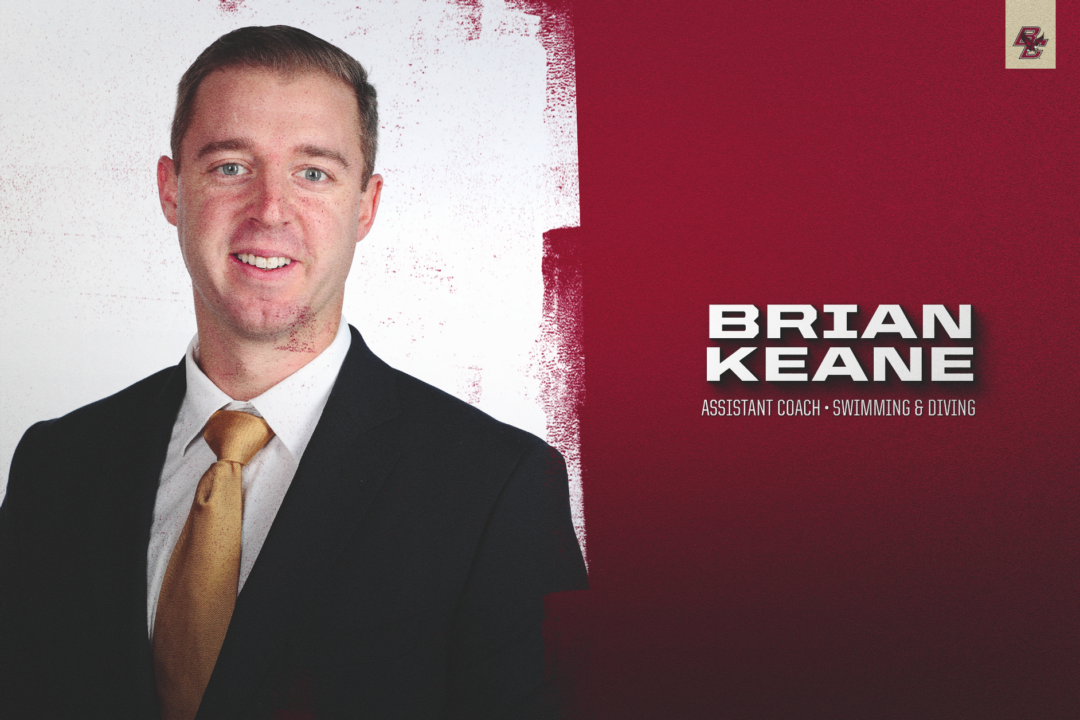 Brian Keane is joining Boston College's coaching staff as an assistant for the men’s and women’s teams after spending the past two seasons at Bryant. Current photo via Boston College Athletics

A month after being lured away from Notre Dame by ACC rival Boston College, new Eagles head coach Joe Brinkman has made his first hire in Chestnut Hill.

Brian Keane is joining Brinkman’s staff as an assistant coach for both the men’s and women’s teams after spending the past two seasons in the same role at Bryant University, located about an hour away in Rhode Island. There, he helped the women’s team capture two Northeast Conference (NEC) titles. Keane also guided the men’s squad to a 2022 NEC title in the team’s first year in the conference.

Bryant boasted four individual conference champions and lowered 10 school records in the last two seasons with Keane on staff. Prior to Bryant, he spent two seasons at Babson College, where his swimmers broke 21 school records and totaled the most points in the history of the Division III program in 2019. Keane competed collegiately for the University of Maryland, Baltimore County from 2010-14, winning America East titles as a team captain in 2011 and 2013 as well as a volunteer assistant coach in 2015.

Keane replaces assistant coach and recruiting coordinator Eric Thurston, who became head coach at Babson College last month after a three-year stint at the other BC in Massachusetts. He’s currently the only other swimming coach on the Eagles’ staff besides Brinkman, who took over the program last month after Mike Stephens left for the University of Hawaii in June. A pair of positions — aquatics director and volunteer assistant — are still open at BC (Boston, not Babson, College).

With the coaching carousel in full swing this offseason, assistant coach Billy Miller became interim head coach for a brief spell before Brinkman was hired. Miller, a two-time school record holder, is no longer on the Eagles’ staff, but remains employed full-time by the school as an Assistant Director, Annual Giving.

“Joe and Brian are both young, hungry, energetic coaches who want to win now,” Miller said. “We have the team to keep moving the needle and these are the coaches who we believe will continue to do that.”

Alex Sobers, a Barbadian Olympian and national record holder who served as a volunteer assistant last season, is also no longer on BC’s coaching staff.

The Eagles begin their season in two weeks with an Oct. 7 matchup at Loyola University Maryland. BC faces an uphill battle as the only non-scholarship program in the ACC, but the program has still managed to build some momentum over the past few years.

Is it luring away when the coach wasn’t wanted back at their former institution?

He wasn’t even on staff last year, I’m sure Katie would have taken him back had he reapplied.