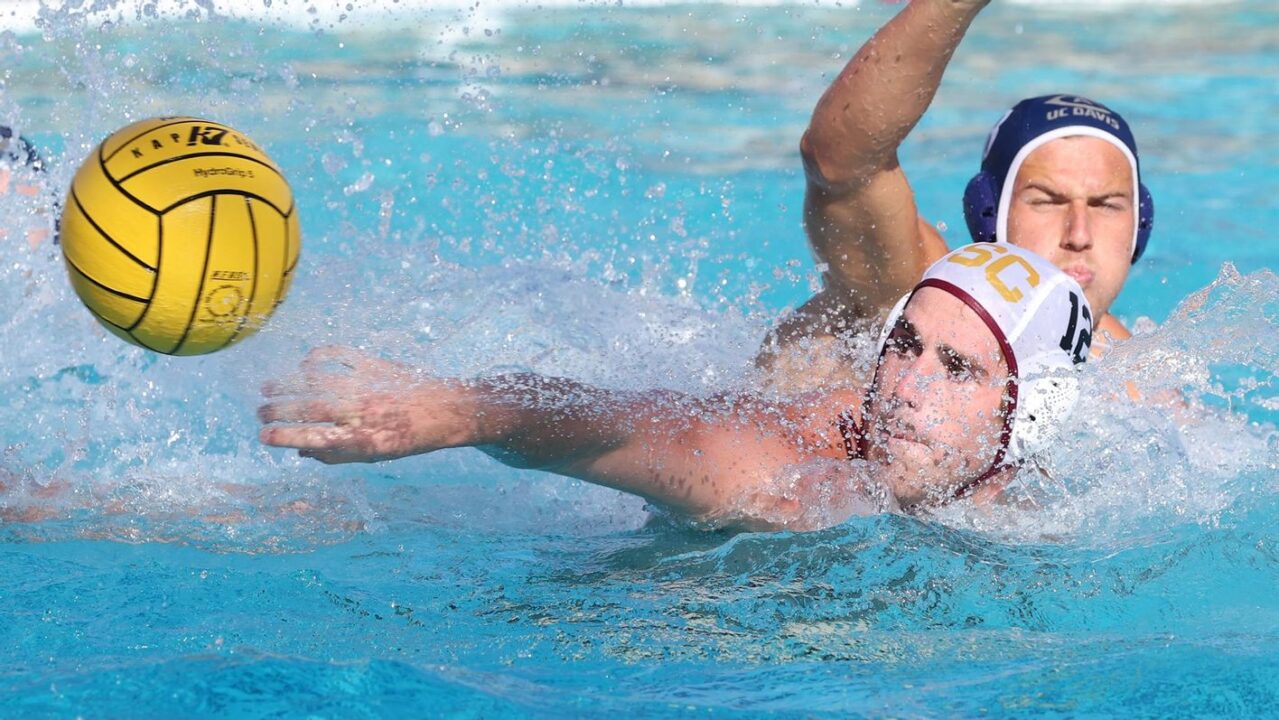 Three goals apiece from Ashworth Molthen and Massimo Di Martire helped secure No. 5 USC's victory over No. 16 Fordham on Friday.

STANFORD, CALIF. — The No. 5 USC men’s water polo team created early space and then stayed the course today in kicking off competition at the MPSF Invitational with a 17-8 win over No. 16 Fordham at Stanford’s Avery Aquatic Center.
Three goals apiece from Ashworth Molthen and Massimo Di Martire helped secure the victory, which puts the Trojans a win away from a semifinal spot in the tourney. Now 9-2 overall, USC turns to close out group play against either UC Davis or UC Irvine on Saturday (Sept. 24) at noon to fight for the right to a place in Saturday evening’s 5:20 p.m. semifinal.
Kyle McKenney put a stop to Fordham’s first chance to get on the board with a save against an early penalty shot, but Fordham would still break through first with a 6-on-5 strike later. USC responded with four straight scores, as Di Martire followed goals from Luka Brnetic and Andrej Grgurevic with back-to-back blasts that had USC ahead 4-1 after eight minutes of action. The scoring rally continued with a finish from Molthen, although Fordham had an answer for that and Marcus Longton’s score in the next stretch. The Trojans rattled off three more, though, and would lead it 9-4 at halftime.
Blake Jackson took over the cage next for the Trojans, who saw Molthen and Longton knock in their second goals of the day while Di Martire notched his third, and it was a 12-6 USC advantage entering the fourth. Molthen’s hat trick was locked in with another quick strike out of the gates, sparking a five-goal USC outburst in the fourth on the way to the final 17-8 decision.
NEXT:
USC will face either UC Davis or UC Irvine at 12 p.m. tomorrow (Sept. 24) to wrap group play at the MPSF Invite. A win there would put the Trojans into a 5:20 p.m. semifinal tomorrow evening at Stanford’s Avery Aquatic Center.
NOTABLE:
– Marcus Longton extended his scoring streak to 11 games — the only Trojan to have scored in every game this season.
– With two goals today, Jake Ehrhardt climbs to rank No. 17 all-time at USC with 142 career goals.
MPSF INVITE — https://gostanford.com/gameday/mens-water-polo-vs-mpsf-invite/mwpolo/4445/
GROUP PLAY
#5 USC 17, #16 Fordham 8
Sept. 23, 2022 | Avery Aquatic Center (Stanford, Calif.)
USC    4 – 5 – 3 – 5 = 17
FORD 1 – 3 – 2 – 2 = 8
SCORING:
USC — Ashworth Molthen 3, Massimo Di Martire 3, Luka Brnetic 2, Jake Ehrhardt 2, Marcus Longton 2, Joshua Waldoch 2, Andrej Grgurevic, Max Miller, Evan Ausmus.
FORD — Luca Silvestri 3, Nir Gross 2, Jacopo Parrella 2, Christos Loupakis.
SAVES: Kyle McKenney (USC) 2 [first half], Blake Jackson (USC) 4 [second half], Thomas Lercari (FORD) 4.