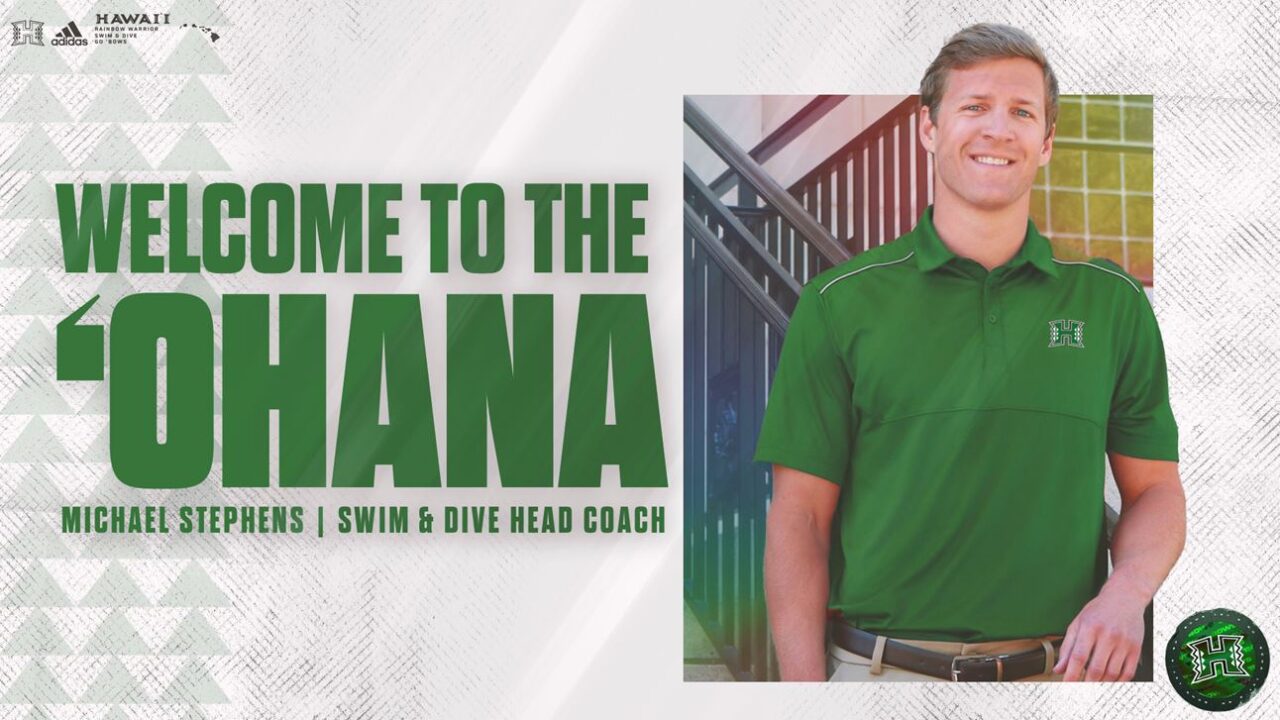 The University of Hawaii has hired Mike Stephens as its new head men’s and women’s swimming & diving coach. Stephens comes to the program from Boston College, where he coached for nine seasons, including the last five as head coach.

Stephens replaces Elliot Ptasnik, who was quietly removed from the position after months of uncertainty and absence from deck.

In Stephens’ five seasons as head coach at Boston College, the Eagles set more than 170 school records, including 18 at the 2022 ACC Championships alone. The BC women finished 12th out of 12 teams and the BC men finished 11th out of 12 teams (ahead of the all-diving team from Miami) in a highly-competitive ACC, but the Eagles competed in that conference without any scholarships, putting them at a big disadvantage against their competition.

In 2021, Eagles junior Haley Dolan became the first Eagles swimmer to qualify for an individual event final at the ACC Championships in 14 years. She was also their first individual scorer at ACCs in 6 years.

Two weeks ago in Atlanta, they had 6 individual athletes qualify for finals, and another 3 score in the mile (which is a timed final).

His student-athletes have achieved 29 NCAA consideration times and zone diving scores, while three women swimmers qualified for the 2021 Olympic Trials. The trio were the first Boston College women to ever qualify for the Olympic Trials. Stephens also recently served as an assistant coach for the Barbados National Swim Team, coaching Alex Sobers in the Tokyo Olympics.

Stephens will try to bring stability to a Hawaii program that went through last season with Marcus Guttmann as interim head coach.

Ptasnik took over the program in summer 2019 when Dan Schemmel was hired away by Stanford to lead the men’s team. He kept the program’s success going, leading both the men’s and women’s team to MPSF conference titles in 2020. For the men, that included a conference-record 895.50 points.

The women won again in 2021, while the men fell to BYU. That extended the women’s title streak to 5.

In Guttmann’s interim year, the Hawaii women finished 2nd, with UCSD snapping the streak by a narrow 12.5 points. The Hawaii men slipped to 3rd place.

When Stephens was named the head coach of Boston College at just 26 years old, he became one of the youngest NCAA Division I head coaches in the modern era. Like he will have to do at Hawaii, Stephens cast a wide recruiting net at BC: the 2021-2022 roster had athletes from more than two dozen states, including Hawaii (freshman Noah Peters).

Boston College is his only coaching job, and he also swam for the program as a student. He graduated with the school record in the 200 medley relay and ranked in the top five all-time in the 100 and 200 breaststrokes. Stephens was a recipient of the Pawlak Award for Special Recognition in 2012 and the Conway Award for Outstanding Sophomore Swimmer in 2010. He also received the Leadership Award from the Athletic Department in 2011.

He graduated with a degree in finance in 2012 from Boston College and earned an MBA in 2016 with a focus on higher education leadership and developmental psychology.

Good, now he has another chance to turn a team into a social dumpster fire but this time the weather is warmer

He had the expectations of an ACC contender as a program without scholarship money which certainly wore on the athletes, because few of them had the capacity to make swimming their life at a school like BC the way kids at, say, IVA or NC state would. He also instituted a “leadership committee” instead of captains yet managed to only leave out a few seniors which had the opposite effect as intended. A swimmer ended up getting kicked off the team for unsubstantiated reasons, partially as a result of this committee, and I can only assume that possible consequent litigation would be a motive for going as far away as possible. The latter comment may not be completely accurate, but… Read more »

Interesting, although I feel like he’d never accomplish anything without some expectation. It’s definitely a difficult situation to be in, but you’d think after being an athlete there himself, albeit mediocre, that he would understand that he either needed to recruit kids that could be and wanted to be held to those expectations, or that he’d need to lower his expectations. However, the number of head coaches that are exactly like this are probably a lot higher than you think, it’s a very delicate balance to try to get the most out of your athletes without pushing them too hard, or letting them walk all over you. Most of the time you end up pushing your athletes too hard

Interesting take…we had heard that he tried to change the program to be more competitive, like a D1 program should be and many athletes didn’t buy in to it. Before him there were only 5 mandatory practices a week-10 or so hours/week and during his time he bumped it gradually to 18.5. Many swimmers were not there for that and they treated it more like a club so there was a lot of dissent within the ranks. The swimmers who wanted to SWIM vs those that treated it like a hobby. There is a reason why all those records were broken and that is due to a change in mindset within the team. Will be curious as to what the… Read more »

Makes sense, BCs move to build a new 8 lane scy pool to replace their old 8 lane scy pool (for a combined program) shows their level of commitment to their swim program. BC has the resources to do much better if they want however it seems like their athletic program is content with last in the ACC every year. At least they haven’t tried to cut the program yet.

Not much reason to cut BC’s program. It’s D1, but non-scholarship. Most of those swimmers are paying north of $75k for the privilege of swimming at BC.

Keep an eye on him, word on the street is that he is the next one up. But will have to see if his teambuilding success and high swimming IQ translates to a bigger program

He did a lot with very little resources at Boston College. That’s for sure.

Obviously a smart guy and a talented coach, so I give him the benefit of the doubt to figure it out, but I also won’t be surprised if there’s a learning curve.

Is Hawaii a move up or sideways? Comparing the programs is like apples to oranges. Curious to see who will fill that spot at Boston College.

I can compare apples and oranges.

I think it’s a step forward in his career. At Boston College, the best he was going to have on his resume is “we did the best with what we could, and that was last place swim team in the ACC and a lot of school records.”

At Hawaii, he can qualify swimmers for NCAAs and win conference titles.

His predecessor at BC was there for 45 years.… Read more »

True – Boston College will continue to be self limited by lack of swim scholarships and weight of academic standards. Anyway, good luck to him!

would be nice for hawaii to not be seen a stepping stone to something better for coaches… the team is not a resume builder for them, but it seems to be viewed that way in the most part.

For ambitious coaches, mid-major programs will always be seen as a stepping stone. That doesn’t mean they’ll always have the opportunity to move on, but if they’re ambitious, they should want to move on. Have to assume that a guy who was a D1 head coach at 26 is ambitious.

Hawaii lists its head coaching salary range for swimming and diving at $63k-$87k. Most SEC schools pay their top assistant at least that much.

This is part of why I see a split in NCAA athletics as almost inevitable. I don’t think you can fault coaches for going after bigger and better paydays, and at the same time, I don’t blame schools like Hawaii from wanting to be a destination… Read more »

It’s definitely a move up, especially for a guy like this who seems motivated to send swimmers to NCAA. The only real advantage the BC job has is knowing that you can finish at the bottom of the conference for half a century and never have to worry about getting fired.

I guess it’s a move up if you are a swim coach. And sending swimmers to NCAAs is your goal in life. Versus the broader goals of the school. And the swimmers. Ofc, this is swimswam, so that makes sense.

This reads like sour grapes from someone who is affiliated with BC, to be honest. I see no reason why the “broader goals” of BC and their student body are somehow superior to those of Hawaii and its students, as your comment implies. If anything, student-athletes at Hawaii are probably going to be more motivated than swimmers at a school that treats its Division 1 program like a rec team for wealthy donors’ kids.

Not superior, just very different. Not bad for a rec team, though.

This guy has the entire package – mark my word. Expert recruiter, excellent coach, empathetic leader, and even still a student of the sport. It may take a few years… but with the resources at Hawaii (that have lacked at BC), Coach Stephens will be a household name in the swimming world in less than 5 years.

brave move, he will miss the Boston weather in Hawaii for sure