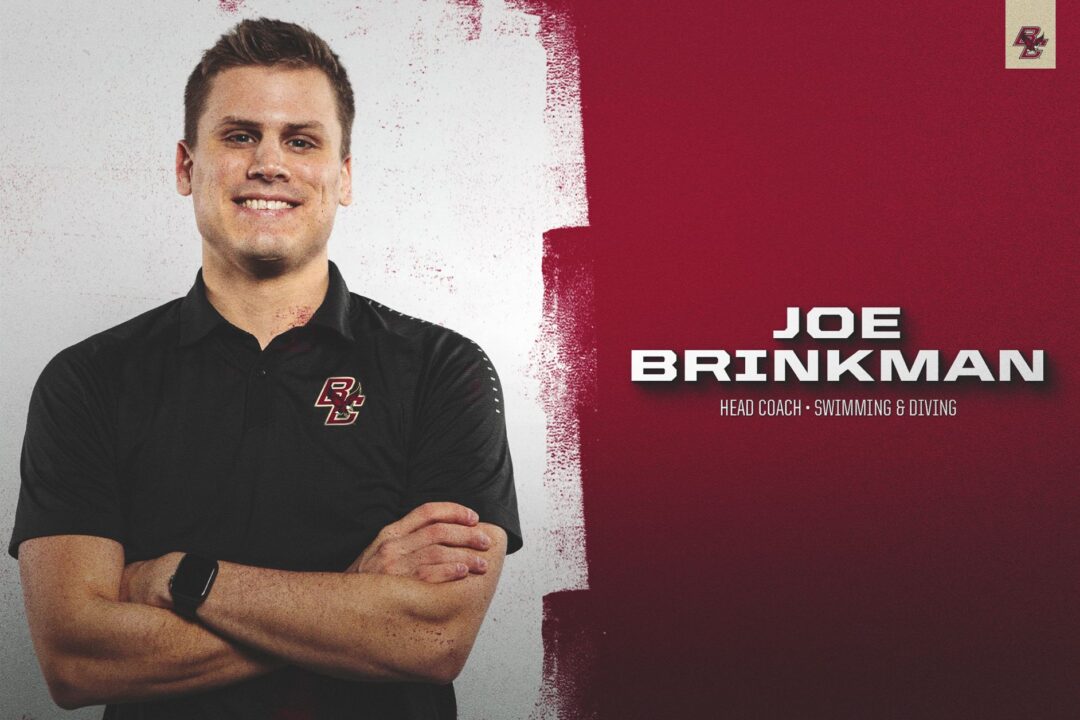 Boston College ventured into rival territory to find the next head coach of the school’s swimming and diving program.

BC faces an uphill battle as the only non-scholarship program in the ACC, but the program has still managed to build some momentum over the past few years.

At the 2021 ACC Championships, Haley Dolan advanced past the heats of the 50 free to become the Eagles’ first female individual ACC finalist in 14 years. Then this spring, they broke 18 school records and boasted six individual athletes who qualified for finals, including three scorers in the mile. The BC women finished 12th out of 12 teams and the men finished 11th out of 12 teams, ahead of the all-diving team from Miami.

Brinkman arrives in Chestnut Hill with an impressive resume after previous stops on the coaching staffs at Notre Dame and Stanford. With the Irish, he guided 24 All-American honorees, helped 40 Notre Dame swimmers advance to the NCAA Championships, and saw 39 school records broken in four seasons.

Prior to that, Brinkman spent two years at Stanford, where he helped the Cardinal capture a Pac-12 Championship and place inside the top 10 at NCAAs back-to-back years in both 2016-17 and 2017-18. The number of Stanford swimmers who earned All-America accolades climbed to 71 during Brinkman’s tenure.

“We’re thrilled to welcome Joe Brinkman to the Boston College Athletics family,” said new BC athletic director Blake James, who made his second head coaching hire in the span of a few days. “Joe is a hard-working, dedicated leader who understands the importance of helping student-athletes develop in and out of the pool.  I know he will take great pride in continuing the growth of our program.”

During his time on The Farm in Palo Alto, Brinkman was also an assistant coach for the National Group at Palo Alto Stanford Aquatics for three seasons. PASA, now known as the Alto Swim Club, most recently earned Silver Medal Club recognition from USA Swimming last year.

“I’d like to thank athletic director Blake James, Associate AD Carly Pariseau, and the whole Boston College swimming and diving family for the opportunity to lead this program,” Brinkman said. “I’m very excited to be a part of this team’s journey and build upon its foundation of success! Go Eags!”

Brinkman is only the third coach in program history. Stephens, a BC alum and former captain of the team, took over for 45-year head coach Tom Groden after he resigned in December of 2016.

Great coach and an incredible person! Congratulations to Joe and BC!!

Does anyone here think that the BC Eagles and the Philadelphia Eagles ever get together and hang out? Would be fun to see one big eagle themed get together at Chickie Flynn’s next time Philly plays New England in Foxboro.

Let’s go Joe!!! Excited to see where the team goes under his leadership!!

Where are you getting this information from? Aren’t scholarship allotments determined by the school itself and not the NCAA?

Sure, there are limits by sport, but it’s news to me if there is an overall cap to scholarships per institution

There is no NCAA-mandated overall cap, but many institutions have internal caps based on budgets. Many schools also have, for example, internal roster limits (or minimums) that they set for each sport. Sometimes it’s just budget, sometimes it’s making sure they stay in-line with Title IX requirements.

Riley used to write for Rivals as the team insider for Boston College football and basketball, was an ACC Conference Player of the Week/Player of the Year voter, and also wrote for the Boston Globe. He’s tapped in to BC athletics.

Why is Boston College not funded exactly?

Because they conclude they can’t be competitive without upgraded facilities, so rather than cut the program entirely, ala far athletically wealthier, Clemson, they go without scholarships and keep a team going with minimal investment. Even Duke’s men don’t offer the full 9.9 scholarships and their women just started a few years ago.

No scholarships, but plenty of investment. BC does have a big beautiful new natatorium…