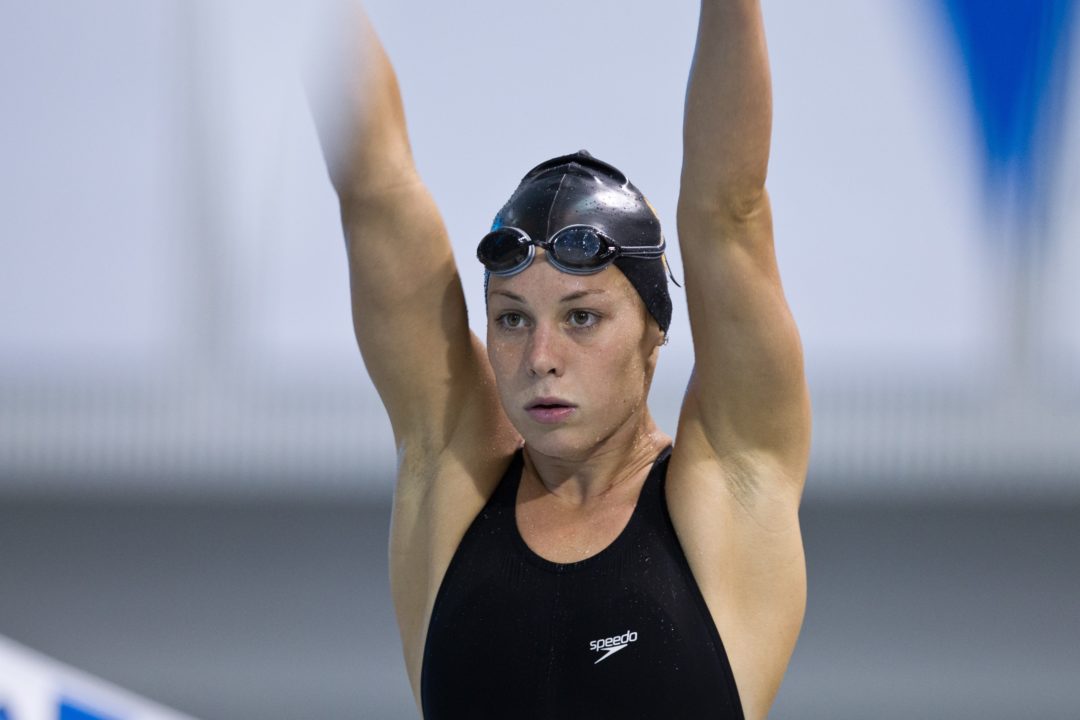 After Presley Anderson (formerly Presley Bard) was diagnosed with stage IV lung cancer earlier this month, a GoFundMe has been created to support her fight. Archive photo via Tim Binning/TheSwimPictures.com

Presley Bard Anderson, an All-American swimmer at Indiana and USC who made the 2010-11 National Team as one of the country’s top backstrokers, was diagnosed with stage IV lung cancer earlier this month at 34 years old.

A GoFundMe has since been created to help Bard Anderson’s family find the best possible medical treatment for her. She has four young children with her husband, Kirk.

“There are promising clinical trials and medical treatments available that have shown significant success rates, and we need to make sure that Presley has access to everything she needs,” said the GoFundMe, organized by Torrey Sims and Donna Smailis. “Undoubtedly, the best treatments cost money. And our commitment is to raise as much money as we can to make sure Presley has every resource she needs to fight. Cancer chose the wrong girl.”

The description for the online fundraiser added that Bard Anderson “has never smoked in her life, and experienced no signs or symptoms.”

A native of Napa, California, Bard Anderson spent two years at Indiana before transferring to USC. In 2010, she won the Trojans’ first-ever conference title in the 100-yard backstroke while setting several school records. She earned a selection to USA Swimming’s National Team in the same event later that year. The following season, as a senior co-captain, Anderson led USC to a 3rd-place finish at the 2011 NCAA Championships — the Trojans’ highest team placement in eight years — behind a 3rd-place showing in the 100 back and a 6th-place result in the 200 back.

Bard Anderson has been working as a teacher at the Napa Valley Unified School District since 2013.

Does she have a Genetic Mutation such as ALK or EGFR?

How many swimmers are perhaps affected by chlorine in some negative way?

It’s been linked to DNA damage, lung damage, and cancer. It doesn’t help that swimmers are literally inhaling the surface of the pool + all the contaminants that are amplified once exposed to chlorine (sunscreen, body lotions, oils, etc.)

I can’t even stand the chlorine in our water at home. My clothes smell like it after washing and in the shower it’s very strong. Very bad for everyone

Here’s hoping she gets into a good clinical trial, preferably one close to her that doesn’t require a ton of travel. Unless she was chewing on asbestos chips as a toddler or such, there’s probably some freak genetic component going on there that led to her cancer. Regardless of public or private funding, there are outlier types of cancer like this that the medical system doesn’t handle well and an otherwise healthy 30-something that doesn’t present symptoms until this type of cancer has metastized is going to be scrambling to try to find something that works that’s outside the usual guidelines for care that are based on a different patient profile.

Being from Germany and living in Austria, I’m always shocked reading stories like this. Health care isn’t perfect anywhere of course, but in countries where it’s free, there is a much higher emphasis on regular routine screenings to catch things early, even when you don’t have symptoms.
And having to pay for treatment when you get sick (probably despite having insurance… she’s a teacher after all…) is just really sad. I’ll be donating and wish her all the best!

Screening for lung cancer at such a young age? It dies not happen, i am also from europe. There is no universal screening programme for any cancer at this age. Why go politizal in this? Poor lady…

The only generally routine cancer screening for a woman under age 40 anywhere is for cervical. If she has a close relative with colon or breast cancer, then early screening is advised because those can have a genetic component and run in families. Beyond that, no one really goes much beyond asking a general practitioner if a mole looks suspicious in a way that might lead to skin cancer.

I’m pretty sure she got the standard care for such diagnosis. Clinical trial or unconventional treatment is not covered. Remember that key point.

American here and no one would screen for lung cancer in a non-smoker under the age of 70. I get our healthcare is broken but come on.

Healthcare is a right in almost every other first world countries, free at the point of service for many, but here, we are free to rely on GoFundMe for survival. But somehow universal healthcare is the RADICAL idea.

I used to live in the country with free medical service for everybody. But the main joke about the quality of such service was “What you pay that you get”. And it was anyway corrupted. And I’m sure it goes this way at any country with free service even in the “first world countries”.
At least here there is some hope that money may help you. Please, don’t be critical unless you have something to propose.

A free health care service in Russia is hardly gonna measure up to what’s available in a wealthy less corrupt country.

There is no such a thing like free lunch. And if you want better service you are paying for it. That situation is true at any type of health care services. If you are privileged or have money then you are in the position to get a service of better quality. And that is where corruption begins. The high level professional is expecting higher compensation in any form. And of course the quality of medical service for general public doesn’t stay at the same level and improves with the technological development and science research. And is more sufficient now in covering successfully basic cases than when I lived in the USSR. And people say : Oh, that is great. Let’s… Read more »

This is what Americans somehow desperately want to believe. 1-0 capitalism. And your argument always compares only to Russia or China. There’s a middle ground, folks.

I guess Mr. Piano should have asked your permission to be critical. I’m sure he’ll remember that in the future.

I think it is between me and Mr. Piano. We do respect each other. And what is it too you? What makes you so offensive?

Not true at all. Canadian here and our healthcare experts and doctors are top notch, you just have to pay …that’s the messed up part.

Agree. It’s shameful and outrageous that we’ve come to this here in the U.S. And if you bring it up at a tragic occasion like the publication of this article, you’re considered ghoulish. I disagree. I think the time to make the point for universal healthcare is every single time someone has to beg to pay their medical bills.

Get rid of insurance and prices will go down leveling the field for everyone, then subsidize those who need it.

I would think that as a teacher Presley does have a health insurance, however some of the experimental treatments she may be seeking are most likely not covered. I lived in Canada for ten years, have Canadian citizenship and I can tell you it was not uncommon back then for Canadians to seek medical treatment in US. My neighbor had his hip replacement surgery done in USA because he was deemed to old for the surgery by Canadian healthcare officials.

This is not true. If you need hip surgery, you will get it in Canada. We do it as needed. Get rid of insurance and your fees will go down. Unfortunately, US insurance profits fr your sickness, which is discusting.

Universal healthcare are available even in many developing countries.

That the most advanced, the richest, most powerful country on earth don’t have it is really telling about its priorities.

I too would like an improved healthcare system in this country. A small positive is that overall Americans have access to newer treatments than in some countries, though the cost is generally higher.

Here are a couple of things to consider. First, the true cost of healthcare for Presley may include lost wages and benefits if she cannot work during treatment. Second, it may also include more childcare.

Clinical trial or unconventional treatment is not covered. That’s why GoFundMe comes into play here.

Spoken like a true Bernie supporter. Canadian here and I have to agree, healthcare in the US is brutal. You should have screening and to shouldn’t have to pay for this treatment.

Absolutely rough. Wishing the best for her and the family.