Blueseventy Swim of the Week: Shebat’s 100 Back Turned The Meet 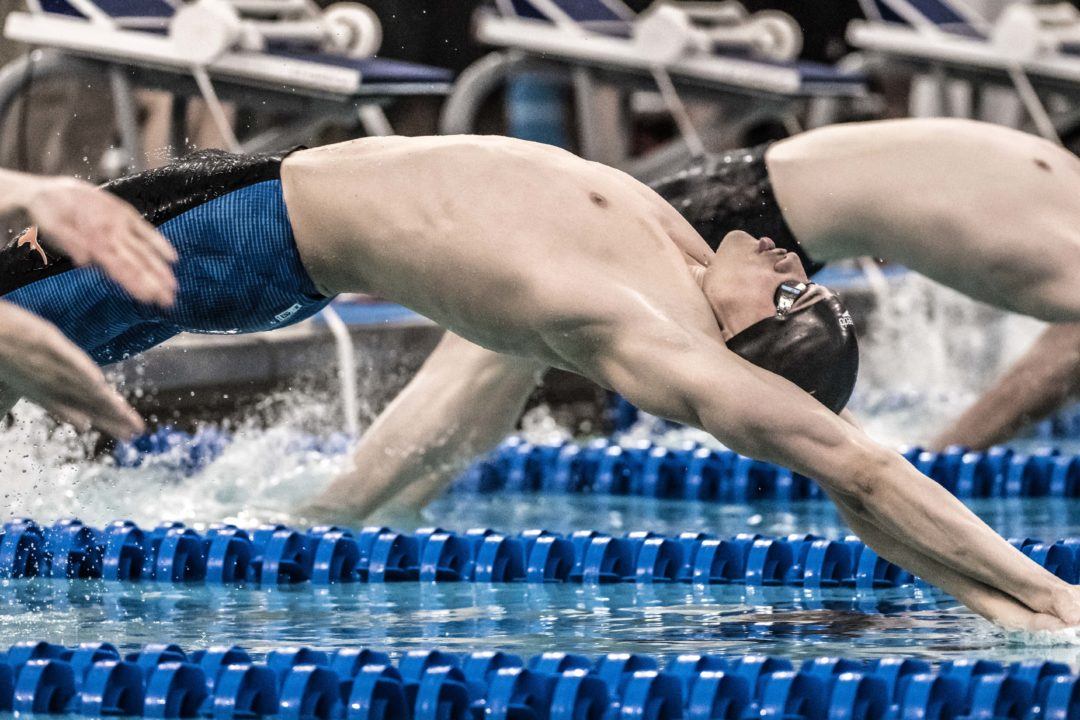 This week, we break down the swim that ultimately turned the meet for Texas - a redemption-fueled 100 back from John Shebat. Archive photo via Mike Lewis/Ola Vista Photography

OK, OK. Clearly the best swim of the week belongs to one Caeleb Dressel, and the discussion of best swim is probably an argument between 17.63, 42.80 and 39.90. And while that discussion would no doubt be fascinating, we’ve already covered Dressel in depth this week, and that very discussion is going to be the subject of our next poll update. So in lieu of rewriting the same accolades and Dressel superlatives that have been expressed ten times in the past week (and to prevent me getting back on my well-worn ‘yard swims matter’ soapbox), let’s use our Swim of the Week to unpack the swim that won the men’s NCAA title for Texas.

Much of Texas’s 4-peat title hopes rested on two swimmers: senior Joseph Schooling, an Olympic champ coming off a lackluster junior year, and John Shebat, the junior coming off an extraordinary sophomore season but dealing with an injury-riddled season that made him a major question mark.

While Schooling was fairly similar to the swimmer he was a year ago, it was Shebat that first made it look like Texas would lose the meet, then roared back to win it.

On day 2, Shebat led off Texas’s 400 medley relay in prelims. Last season, he was 44.35, putting him 3rd all-time in the event, but this year, he hadn’t been within a second of that time. Texas faithful hoped his disjointed regular season was a red herring that would be forgotten with a big taper swim. On Thursday morning, Shebat led off in 45.60. And Texas took 9th.

That was a massive blow to the Longhorns title hopes. With relay points capped at 18 in an event Texas had won 40 points the past three years, the ‘Horns would fall well off projections. And with Shebat finishing 1.3 seconds off his time from a year ago, Texas looked like it would be losing significant points from expectations in both the 100 and 200 backs.

When we as swimmers have a bad swim at a taper meet, we have two choices. We can accept that the time on the scoreboard is who we are. We can try to explain a missed taper, we can pout, we can soldier on and try to be consistent with our remaining swims despite not having the speed we thought we would.

Or we can refuse to accept that the bad swim is real. We can restart our meet with swim #2, change the narrative, change the tone and prove that we are more than one bad swim.

After being left off the 400 medley relay in finals, Shebat returned to swim the 100 back individually, gutting out an inspired morning swim that succeeded on pure gumption. He went out in 21.45, faster than all but one swimmer in the field, and though he visibly struggled coming home, Shebat finished in 45.00, a major improvement over his relay swim.

He would come back in the final to go out even faster – a field-best 21.38 – and hung on for second in 44.58, taking 2nd place, finding redemption and hauling in 17 points for Texas: much closer to the total many had projected for him.

Had Shebat stayed at his medley relay leadoff speed, he would have been 12th in the morning and 14th at night. Instead of 17 points, he would have scored 3, taking 14 away from Texas’s final total.

Shebat’s redemption swims are a great reminder for swimmers never to let one bad swim take them off their game for the rest of the meet. It’s also a true testament to the sports cliche that winners never stop fighting. Had Shebat stopped fighting, we’d be analyzing a different national champion this week. And for that, his redemptive 100 back is our Swim of the Week.

Yes, Coleman Stewart won. The reason Shebat was impressive wasn’t all about time or place, he showed a lot of determination and was the key to Texas winning

Lol you missed the joke in there

Nice choice as it did not look good for Texas after day two. Shebat has not looked good all year with his bought with mono over the summer, Eddie working the team to death all fall & winter, and then knee surgery just before conference and NCAA’s. Hope he can stay healthy for now on.

this is a very odd choice.

I feel like after dressel, Finnerty should have gotten a close second for his sub 50..

The premise of this article is not necessarily the 2nd best swims which certainly Finnerty accomplished, but Shebat coming back to re-boot his meet and being a key to the Texas win.

As a breaststroker myself, I feel the same way!

That said, I like to use our featured swim of the week to unpack context – in particular, which swim from last week’s insane team battle wouldn’t get its own full story, but had the biggest impact on propelling the meet in the direction it went. To me, watching the meet unfold, Shebat rapidly returning to form over the final two days was *the* reason Texas was able to remain in the team hunt, and I thought his grit in coming back from a swim that clearly disappointed him on Thursday morning was admirable and under-discussed.

Absolutely. After the prelims 400 MR, Texas was in BIG trouble. Not just b/c they finished 9th, but b/c it was looking like Shebat might be headed for either few or zero pts in 2 events he was the favorite in. For him to rally for 34 indv. points was a big turnaround and was a difference-maker for TX.