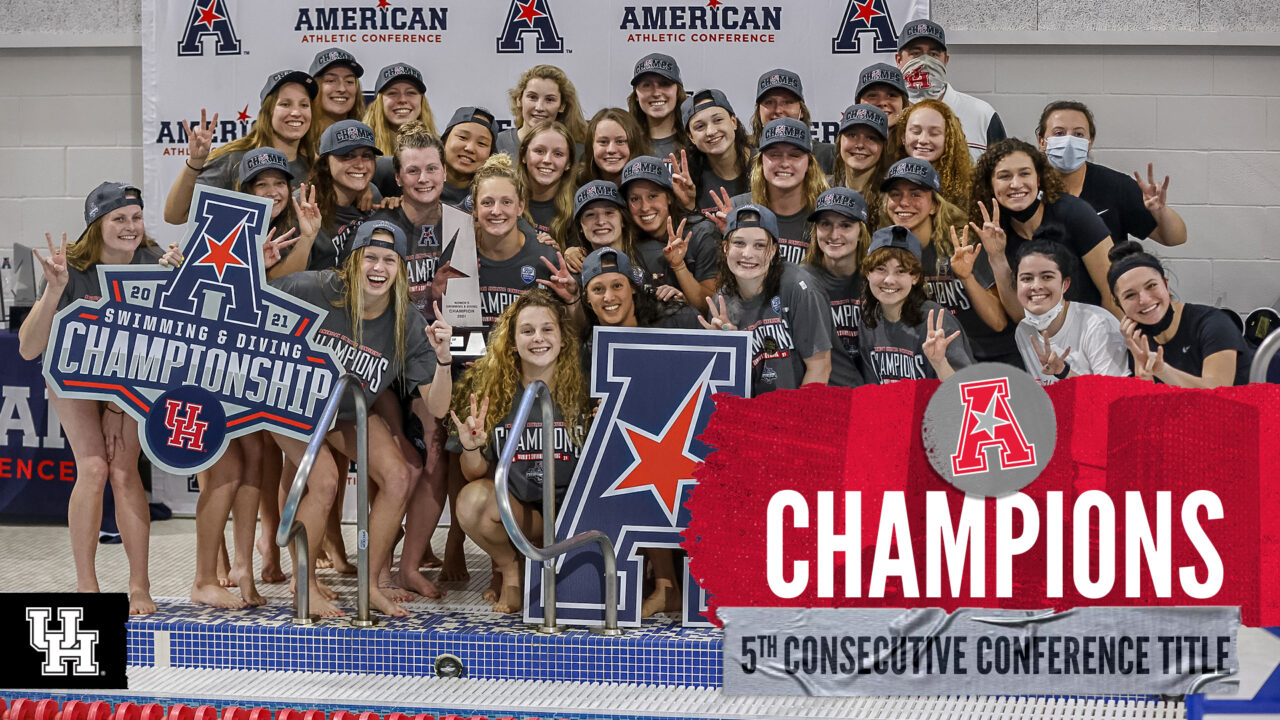 Could the 5-time defending AAC Champion University of Houston women join the Big 12 Conference? The Big 12 hopes so..... Archive photo via Houston Athletics

Alec Enyeart, an Olympic Trials qualifier in the 400/800/1500 free, has changed his verbal commitment from Minnesota to Texas.

Carson Foster will miss Friday’s rivalry dual meet between Texas and Texas A&M to attend a wedding, he announced on his Instagram.

The Big 12 Conference released a statement on Wednesday saying that they would push forward as a conference, in spite of recent news of dramatic shakeup in their ranks. The conference also plans to add four programs, with targets already emerging.

The eight remaining members of the conference agreed to push forward and “strengthen the league” after the University of Texas and the University of Oklahoma, the league’s two power players, announced that they planned to pursue membership in the SEC in 2025.

Following two days of consultation with the athletics directors of the Big 12 Conference, commissioner Bob Bowlsby stated, “The eight ADs (athletics directors) remain committed to furthering the Big 12 as one of the nation’s premier athletic conferences, and look forward to working with our presidents and chancellors to strengthen the league. Future exploration by the group will continue to center on options that best position the long-term strength of the Conference.”

Besides the announcement by Texas and Oklahoma, the Big 12’s decision also comes after the Pac-12 Conference announced that they were not seeking to expand from their current 12-school membership.

There are a lot of moving pieces in play in the current college landscape. Besides the earth-shattering news of the move by Texas and Oklahoma, the NCAA is holding a constitutional convention later this year, with the head of the NCAA publicly saying that maybe the NCAA has outlived its purpose and that he is expecting radical changes to the college sports landscape.

Recent easing of Name, Image, and Likeness rules to allow college athletes to profit off their success via sponsorships has further accelerated the financial pressures on collegiate athletics and created more complex relationships between schools, sponsors, fans, and student-athletes.

While all of these decisions are being made on the basis of football, mostly, and basketball, partially, they will impact Olympic sports like swimming & diving (read more on that here).

Plans to expand the college football playoff, which is not an NCAA Championship event but which still produces substantial revenue for NCAA athletics programs, gives the Big 12 some reason to push forward with its eight current member schools and any other that might join the conference.

The increased footprint of the powerful SEC in Big 12 country, though, will make it even harder for the conference to regain the lost revenue from its two largest athletics programs.

Barring any other moves, this would leave only two men’s swimming & diving programs, TCU and West Virginia, in the conference, plus an additional two women’s programs, at Iowa State and Kansas.

But the Big 12 already has its eyes on expansion. The conference says that its preference is to expand by four teams, which would bring it up to the epnonymous 12 teams, and has four primary targets, according to The Athletic’s Max Olson.

BYU (Independent for football, MPSF for swimming), Cincinnati (AAC), Houston (AAC), and Central Florida (AAC) are the reported targets. That list doesn’t include the Dallas-based SMU, which would fit the conference geographically but not offer much in the way of new television markets.

Cincinnati and BYU each sponsor men’s and women’s teams in swimming & diving, while Houston sponsors a women’s-only team.

All of those numbers would likely rise within the context of the Big 12, even a different Big 12 than exists now, and all four programs have had some national football success in their histories that makes for enticing competitive opportunities.

Where the Big 12 falls in the final pecking order, whether it finds a way to remain among the “Power X” conferences, or follows the fate of the Big East toward the financial top of the “Group of X” conference, will likely be dramatically impacted by the upcoming NCAA convention, but for now, be it honesty or a play for leverage, the Big 12 is moving forward as a bloc.

If UCF added swimming, would be a very good conference and keep the men’s programs alive. Would be an attractive fifth conference.

It’s crazy that a school of that size in the middle of Florida doesn’t have a swim team!

USF is the same way. There’s really no reason for either to start a program, though, unfortunately. With 40,000 students, swimming isn’t going to “bring in” more students. And if the school is Title IX compliant already, there’s really zero incentive, especially in the current NCAA climate.

Yeah what happens to their Men’s conference meet?

Cincinnati’s football team has a AP preseason ranking of #8.