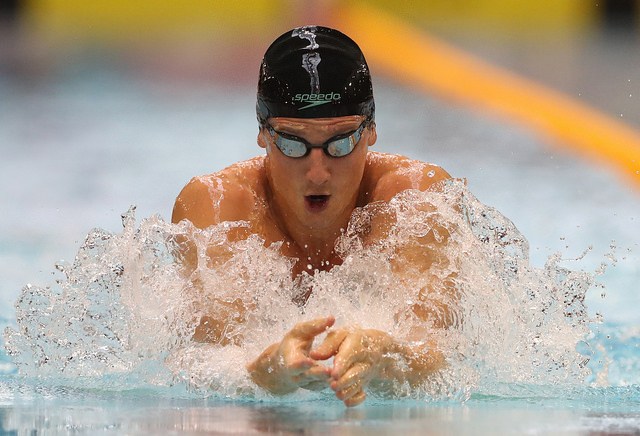 Check out the latest edition of Beyond the Lane Lines, featuring Tokyo 2020 news, an update on Michael Jamieson's MJ Swim Academy and more. Archive photo via Scottish Swimming

Kyodo News is reporting that more than 16,910 applications have been received by the Tokyo metropolitan government to become one of the 165 runners to participate in the Tokyo leg of the 2020 Olympic torch relay. There will be about 10,000 torchbearers in total running in Japan, of whom 2,500 will be selected by organizing committees in the country’s 47 prefectures.

Tokyo is assigned 330 runners, with half chosen from the public. The rest are decided based on recommendations from the metropolitan government’s organizing committee. (Kyodo News)

Applicants will be made aware in December whether or not they have been selected through a screening process based on documents they submitted earlier.

A 2-part documentary series entitled The Pool will be airing on Australia’s ABC and iView on September 22nd and September 29th. The special broadcast presents the role of the pool as a focal point for leisure and community. But the documentary also explores ‘the surprising and unold sortry of a battleground where feminism, racism and sexuality were explored, and sporting heroes born.’

Directed by Sally Aitken, it is written by Barracuda author Christos Tsiolkas with Sally Aitken and Paul Clarke, and narrated by Richard Roxburgh.

Two-time Olympian Valerijs Kalmikovs of Latvia became the first swimmer from his nation to successfully swim across the Strait of Dover. The 46-year-old accomplished his aquatic mission on Monday, September 9th, with his time logged at 11 hours and 13 minutes.

“I had a phenomenal team. You all did a great job,” Kalmikovs thanked his team. “The swim was great, I really enjoyed it,” he added.

“The last 40 meters were freezing, but overall it was a very good swim,” said the swimmer.

Kalmikovs raced at the 1996 and 2000 Olympics. After his career, Kalmikov became a professional coach.

After retiring from competitive swimming in 2017, Olympic medalist Michael Jamieson of Great Britain has been on a quest to give back to the sport which gave him so much. To that end, Jamieson launched Glasgow’s first ‘MJ Swimming Academy’ to return support to the city of Glasgow, a place which ‘supported him through the highs and lows of his competitive career.’

“I felt a sense of responsibility to give something back to a community that supported me so well throughout my competitive career,” he told The Evening Times.

“I really believe we need to be building the emotional fitness of young people.We want to benefit from the (positive) behaviours sport teaches us.

“Resilience comes through finding and developing skills to firstly endure, before overcoming a challenging situation.

“This is the message we try to convey at the Swim Academy, helped by some challenging personal experiences I had in sport.”

Jamieson won Olympic silver in the men’s 200m bresatstroke at the 2012 Olympic Games in London, but faced injury and bouts with depression in the years following. In addition to his MJ Swim Academy endeavor, Jamieson has become a mental htealth advocate for both atheltes and non-athletes alike.

“We don’t do enough to harness the positive behaviours elite sport teaches us – we analyse the performance too much and very few athletes are present enough in their environment to truly enjoy the immense privilege it is to be a professional athlete.

“We all work hard, we are all looking for purpose and content in our lives, the more open we can be about our experiences, the more positive messages we can relay to the kids coming next.”

The dates and locations of the VOWCS are as follows: