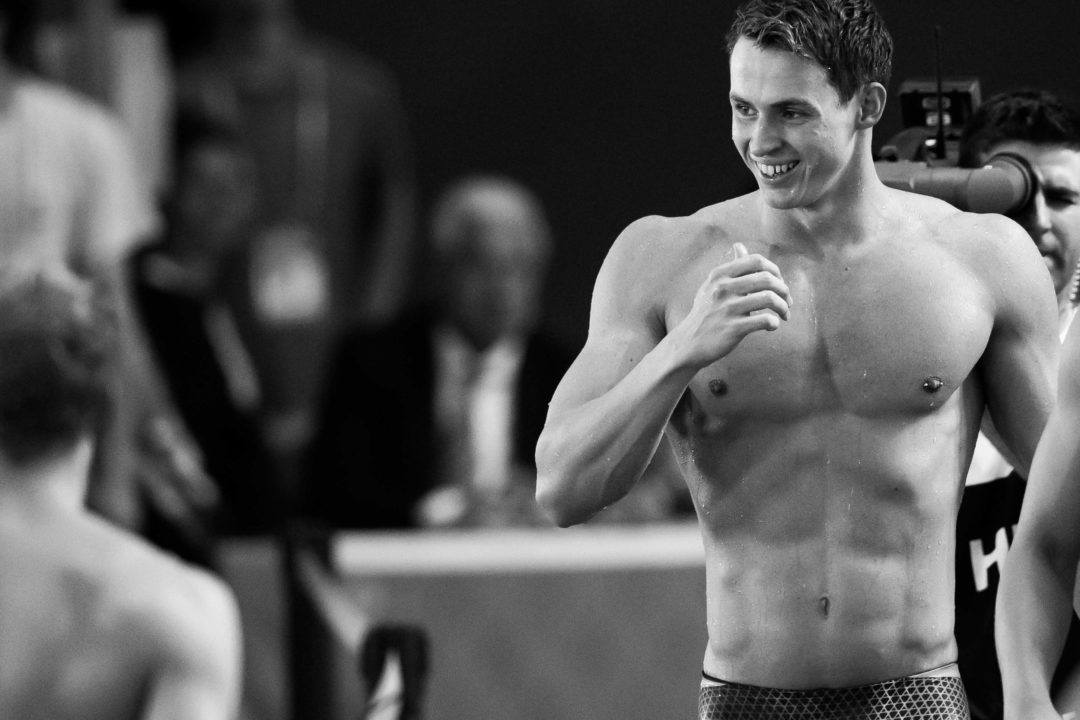 Ben Proud rocketed to a new Commonwealth Record of 21.16 in the men's 50 free in Rome. Archive photo via Mike Lewis/Ola Vista Photography

On the opening day of the 2018 Sette Colli Trophy in Rome, several national records fell by the wayside, but none were bigger than Great Britain’s Ben Proud swimming one of the fastest 50 freestyles in history.

Proud, who won the Commonwealth Games gold medal in April in 21.30, which was a new British Record and the fastest time in the world this year, dropped a scintillating 21.16 in Rome. He not only breaks his own British Record, but also blows past Ashley Callus‘ suited Commonwealth Record from 2009 of 21.19, and becomes the 4th fastest performer in history.

He now only trails world record holder Cesar Cielo and France’s Frederick Bousquet, who both went sub-21 with the super-suits, and Caeleb Dressel, who swam the fastest textile time ever last summer to win the World Championship crown in 21.15. Proud is now just .01 off that elusive mark.

The swim was also the 7th fastest performance in history:

Proud was disqualified in the prelims of the 50 fly at the Commonwealth Games, the event in which he is the reigning world champion, so the world record in that event will be on watch later in the meet. He’s been 22.96 this season, but holds a best of 22.75, with the world record standing at 22.43.

Something people seem to forget with Dressel. Just because his 17.63 came after the 21.15 doesn’t mean he got better, it could just be his yards time catching up to his meters drops. He cut no time the previous year in yards.

The first thing that happens is that, he is compared to Dressel. Give Ben some credit on a great swim.

Dressel will get really pissed and drop a 21.0 in practice.

Swimmers that own cute puppies don’t get pissed about anything.

In b4 PVDH says Dressel will soon be miles in front when rested.

Wow that changes everything, Dressel no longer untouchable in the 50 free. Let’s see how Dressel responds. Anyways, phenomenal swim!

Did you so quickly forget that yards and meters are different? Dressel is the greatest yards swimmer in history because of his raw speed and underwaters. Meters is a different animal. Not saying that he can’t swim meters (he obviously can) and not saying that proud doesn’t have underwaters (he clearly does), but hands down yards or any type of short course race I would give the nod to dressel for his explosive underwaters on the turn compared to proud. After seeing this, you take away the wall and I’ll flip a coin between the two. Think about it this way, a supersuited Cielo could only muster an 18.41 SCY where as dressel went 17.63. That same supersuited Cielo went… Read more »

dressel dropped over half a second in yards this past year in the 50. if that translates to meters over this year he’s had, he will crush the world record

Valid point. It’s like Phelps and the 100 fly. He was running on fumes by the time the 100 fly came around. In 2016, Schooling stayed rested and won the gold medal.

2028 Dressl and 50free, wasted talent if he doesn’t swim 200free and 200IM ( providing he doesn’t get beat) but Florida is 200IM and 200free.
Yang v dressel?
Chase v dressel ?
I’d back dressel.
50free after against a fresh proud ? British swimming targets medal and medals mean money and funding.
I read somewhere once that if Lochte had quailified for 100fly in 2012 they would of dropped 200bk, Troy won’t… Read more »

There’s already a GOAT in swimming: first WR before 16 and first gold at Worlds at 16, a show at Worlds at 18, six Olympic golds (8 Olympic medal) at 19, another impressive show at Worlds at 21 and the legend made at Olympics at 23.
And then other two Olympics for an amount of golds who probably will remain unmatched in the sport history even with the introduction of new distances.
Dressel the new GOAT? Perhaps in 2032.., a long, long path ahead of him.

And this is at the end of it.

Yes, it’s a brutal schedule, the 50 is often an event for specialists and Dressel could lose to Proud (or someone else).

But it doesn’t hinder his other events to try it and Dressel doesn’t strike me as a swimmer to duck races just because there’s a chance he might not win.

townley would be tough in the 200 even for dressel

This dude just keeps getting bigger

I remember an interview a few years back where Becky Adlington asked whether he thought he needed to bulk up to compete for global medals.

At the time he got quite defensive and disagreed. Clearly changed his mind!

He became friends with Peaty..

He met James Gibson – Energy Standard head coach. Govorov’s arms and shoulders have got a lot bigger in the last few years too… He was always far too slight for a 50 flyer imo though.

I remember Gibson doing a swim clinic for us way back in 2002.

At a time when plenty of elite sprinters (eg. Popov, Van den Hoogenband) were still quite lean, he was built like a brick ****house. I thought he looked like Superman!