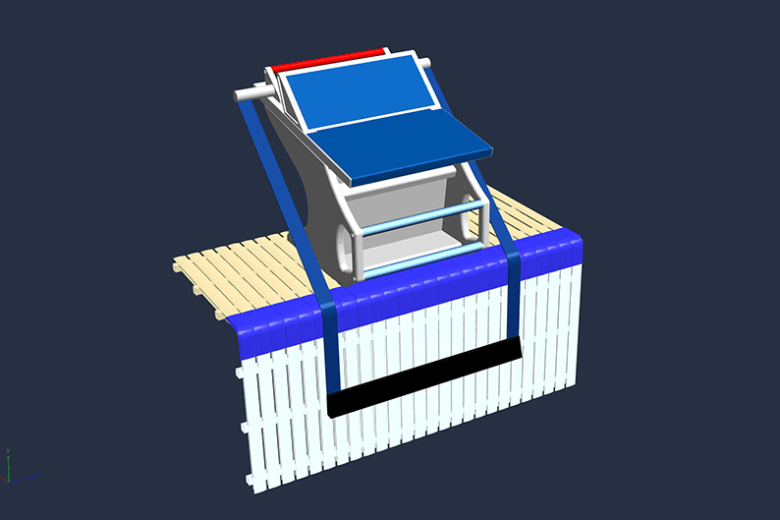 The launch of the newly-approved “backstroke wedges” for starts has been delayed even further, and USA Swimming won’t be using... Current photo via Myrtha Pools

The launch of the newly-approved “backstroke wedges” for starts has been delayed even further, and USA Swimming won’t be using them at the upcoming Santa Clara Grand Prix.

Though the wedges are approved for competition in 2014, FINA sent out a letter last week recommending that meet hosts not use them until this fall, when FINA plans a full launch at the World Cup Series.

FINA also said that they will decide at that World Cup Series whether or not to use them at the 2014 Short Course World Championships in Doha, which is the next big FINA championship on the schedule.

The wedges were initially considered for use in Mesa and Charlotte, but there were concerns over the compatibility of Omega wedges with other brands of blocks. Now, other companies have designed similar wedges.

FINA’s justification for the delay is the fact that the wedges are not commercially available yet, so “in order to promote equity among all competitors,” they don’t yet want it used at national or international events. While FINA did not specifically prohibit their use, this recommendation will weigh heavily, so don’t expect them at meets like U.S. Nationals, Pan Pacs, the European Championships, or the Commonwealth Games, either.

While Omega seems to have been the first-to-market with their new wedges, several other brands have since launched wedges of their own, meaning that backstroke wedges now exist that will fit blocks at the Mesa and Charlotte Grand Prixs. More time before a full launch will also allow for more equal competition between wedge manufacturers on the quality of the product.

See a video demonstration of the wedge start blocks here.

Achieving a good push-off for the start has always been a challenge in backstroke events. Why are current world-class swimmers no longer up to this challenge?

This wedge exists so that elite swimmers won’t have to compromise foot position to prevent slipping, right? Will run-of-the-mill age groupers (who could probably benefit from them more) ever see one? Not until everyone has spent thousands just to keep up with the Joneses in this equipment-intensive arms-race.

Thanks, FINA, for simultaneously removing another technical challenge from backstroke events while making the sport more expensive for everyone.

I realize this bothers me more than it should, but really….

This might be reconfigured from being supported from the top of the block behind the wedge to being reacted at the base of the block at deck level. With some adjustment tolerance this should make it much more generally compatible with a typical block (except blocks with a vary narrow base or blade support, though an adapter could be offered).

Think John Naber has ever thought, “Put me in a rubber suit with flip turns and start wedges and I would have toasted Aaron Peirsol and Ryan Lochte.”