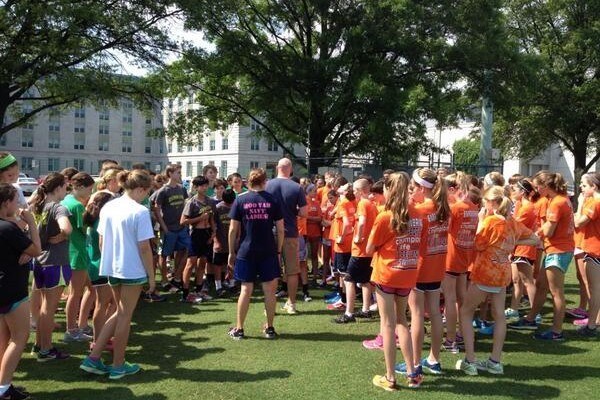 SwimMAC and Dynamo are collaborating in Annapolis, Maryland for a week long 11-14 training camp in preparation for the weekend meet at NBAC. Current photo via Dynamo Swim Club

Many are intimidated by cooperation, but as famed social psychologist Jonathan Haidt said, “The most powerful force ever known on this planet is human cooperation – a force for construction and destruction.”

Dynamo and SwimMAC Carolina, two of the top age group programs in the country have fully embraced the spirit of cooperation and teamed up for a week-long training camp at the Naval Academy in Annapolis, Maryland. Each team brought a group of their best 11-14 year olds. The training camp started on Monday and continues through Thursday in preparation for a weekend long course meet hosted by NBAC.

SwimMAC held this camp for their team last year in the week leading up to the NBAC meet. Both Dynamo and SwimMAC swam in this meet last year, and Dynamo loved the idea of the camp. It was not long after the meet before Dynamo received a phone call asking their team to participate in the camp this year. Each team is striving for higher levels of competition with top-notch collaboration. These two teams were the top two team finishers at the winter junior nationals in December.

Each team publicized the camp to their swimmers early on so they would have the opportunity to look for other swim camps that did not conflict with this week. Dynamo and SwimMAC agreed to split the coaching responsibilities, divvying out the different workouts between the Dynamo staff, the SwimMAC staff, and the Navy Women’s staff.

The dryland program was designed by the former USMC wrestling coach, Major Antonelli. Major Antonelli showed the swimmers and coaches what life as a navy plebe was like, making the coaches hit the dirt as well! The training program was designed to prepare the swimmers for the meet this weekend, with a special focus on butterfly, breaststroke, starts, and turns. The morning workouts included more aerobic threshold work and the evening workouts were meant to be more technical.

In addition to swimming, the swimmer’s are meeting with several guest speakers throughout the week to prepare them for the future in and out of the pool.

Bridget Ruiz is a Naval Underwater Demolitions Expert and ex-college swimmer. She talked with the kids about college swimming and what is required before and after you commit to swim in college. College swimming requires a lot of dedication and focus, something Bridget knows a lot about as a former swimmer and Navy sailor. Her husband, Coleman Ruiz was a former college wrestler and is now a Navy SEAL. He was there to talk about dedication, the warrior mindset, and why it is necessary for sports and for everyday life.

Dr. Jessica Mohler is a sports psychologists that focuses on both athletic and military performance. As a former commissioned Navy Officer, she has been honored and recognized for her efforts in applying Mental Skills Training to the Navy Physical Readiness Test. Dr. Mohler was there to talk to the swimmers about being confident.

Lieutenant General John F. Sattler, United States Marine Corps, was the Director of Strategic Plans and Policy, U.S. Joint Chiefs of Staff. He was also concurrently the United States’ representative to the Military Staff Committee of the United Nations. He met with the swimmers to talk about Leadership.

In 1992, Haley Scott, now Haley Scott Demaria, was on a bus ride back to South Bend, IN after she and her teammates swam against Northwestern in Illinois. That night, the bus the Notre Dame women’s swim team was being driven in slipped on ice just four miles away from campus. The bus crashed, tragically ending the life of two of her teammates. In the crash she had severed her spine, and was unable to feel her legs while she was being lifted into the ambulance. The doctors expected Scott to be paralyzed. They predicted that she would need to spend over a year in the hospital, and after that, she might be able to stand again with leg braces. A week after her accident, she moved her big toe, and the doctors were beyond excited. Three weeks after the accident, Haley was able to stand with the help of a walker, and in two more weeks, she was walking with a cane and back on campus. She finished the semester without complications, but had major problems over the summer. The rods supporting her back became displaced, requiring emergency surgery to save her life. She fought through the pain and agony of her injury and had the mindset to recover.

That fall, she returned to Notre Dame. Not only was she able to return to her normal life as a student, she was back in the water. Her first meet back was October 23, 1993; a year and a half after the accident. She was able to swim and won her heat in the 50 freestyle with a personal best time of 25.04.

Haley Scott has battled and persevered through many challenging situations, and is an inspiration. She will be talking to the swimmers about persevering and pushing through challenges when the odds are against you.

The swimming community is very close knit, and it was important to the coaching staff that the swimmers begin to make connections and make new friends. As much as this camp is about the swimming, it is also about the experience. There are 120 swimmers between the two teams, and each team has it’s own rich tradition. The Naval Academy is an ideal location to celebrate tradition and learn from cooperation. The swimmers are all staying on campus and eating in the campus dining halls. There are no phones allowed at meals, and the swimmers have to sit with swimmers from the other team.

With Haley Scott as a guest speaker, Amy Van Dyken’s recent injury has hit very close to home. The Dynamo swimmers got together to make sign’s and send Amy their thoughts as she begins her recovery. You can view their picture here.  SwimMAC had not arrived yet when this picture was organized and taken.

To qualify for the training camp, the swimmers from each team needed to have at least four USA Swimming “A” times for their respective age group. The camp is being led by SwimMAC coaches Terry Fritch, Russ Kasl, Sarah Holhman, Scott Wiltsey and Dynamo coaches Nick Graves and Beth Winkowski.

It was brought to our attention that we left off the Navy women’s swimming coaching staff. John Morrison and Rob Lias have been a huge part of making this camp a success.

Thanks SwimSwam for the coverage. We also want to thank the Navy Women’s team Coaches John Morrison & Rob Lias for hosting the camp. They are active with the teams on deck coaching and off deck. They have provided a great experience and environment for the swimmers. SwimMAC and Dynamo are getting better this week in a unique and fun way.