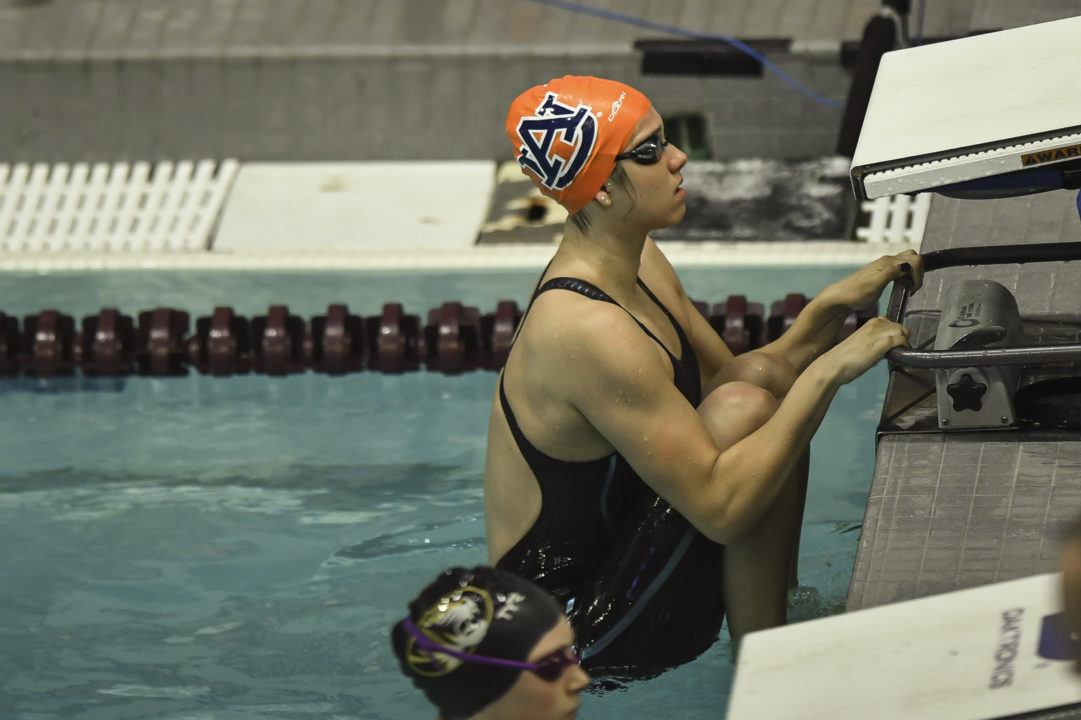 Auburn’s swimming and diving teams will be in Knoxville, Tenn., for a dual meet with SEC foe Tennessee on Friday at 11 am CT at the Jones Aquatics Center. Current photo via Wade Rackley/Auburn Athletics

AUBURN, Ala. – Auburn’s swimming and diving teams will be in Knoxville, Tenn., for a dual meet with SEC foe Tennessee on Friday at 11 am CT at the Jones Aquatics Center. Auburn goes into the meet ranked 17th by the CSCAA in its Top 25 women’s poll while the men are receiving votes. Tennessee is ranked No. 24 on the women’s side and No. 15 on the men’s side.

“Tennessee is really good on both the men’s and women’s side,” Auburn head coach Gary Taylor said. “Our women had a major challenge two weeks ago at Virginia and they have another great challenge as Tennessee is one of the best programs in the SEC and one of the best in all of NCAA swimming. I think on their home turf, (Tennessee) knows whose coming to town, they know what we did against UVA and we know what they’ve done. I think there is going to be some pretty good energy and hype behind us.”

Auburn’s women are coming off of a big victory over No. 7 and defending ACC Champion Virginia last month in which Auburn won 12 events, including all four relays. Following the meet Claire Fisch was named the SEC Swimmer of the Week after she won the 50 free, finished second in the 100 free and swam on all four winning relays.

On the season, Auburn’s women are 2-0 in dual meets having also defeated Florida Gulf Coast in the opener.

Auburn currently has 11 swims that are among the 16-fastest in the country:

In diving, Alison Maillard is looking for her third straight win on the 1-meter and a second win on the 3-meter, having earned Zone Diving Qualification scores on both. Wendy Espina also has a Zone score on the 3-meter.

“I’d like to think our women can compete with anyone in the SEC so now we’ll find that out,” Taylor said.

Having competed just once, Auburn’s men do not have any top-16 times nationally but they do have a three of top-8 times in the SEC as Santiago Grassi is fourth in the 200 fly (1:47.55) and sixth in the 100 fly (48.19) and Josh Dannhauser is eighth in the 500 free (4:26.31). Additionally, Scott Lazeroff has already claimed Zone Diving Scores on both springboards and Conner Pruitt has a 3-meter qualifying score.

“Tennessee’s men have had some tough dual meets as well and they have performed at a high level,” Taylor said. “Our men will be ready to go. We are looking forward to the opportunity and we know they will be ready for us.”

Live stats for the meet will be available through auburntigers.com and divemeets.com.

It looks like Auburn and Texas have a dual meet scheduled in Jan in Auburn. So I guess they are not scoring against each other here…

AU has no chance against the VOLUNTEER MEN. The AU girls against TN girls should be a fun meet BUT I give the edge to TN in home waters. Upvote says UT girls win/Downvote says AU girls win.

Auburn women went into UVA home waters and kicked butt. I think it will be close but I downvoted to say UA women win.

Is this streaming anywhere?

My bad I thought it would be a fun meet IT WAS A ROUT…LADYVOL POWER RULES THE PLANET!!!!!