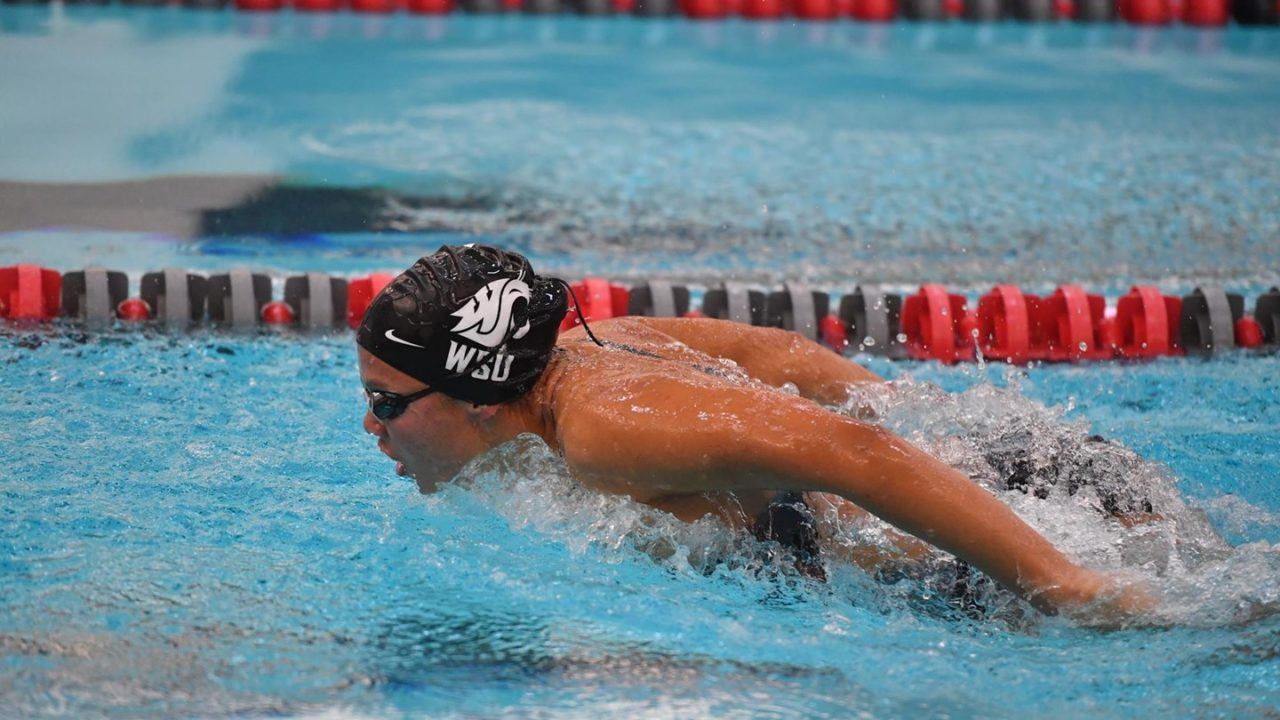 The Washington State Cougars, which are coming off a 1-1 showing last weekend, welcome Wyoming to Gibb Pool Nov. 9 at 5 p.m., for the teams' first meeting since 1993-94. Current photo via Washington State Athletics

The Cougars welcome Wyoming to Gibb Pool Nov. 9 at 5 p.m. The meet will be streamed live on wsucougars.com.

ABOUT THE OPPONENTS
The Cowgirls from Wyoming placed fourth in the Mountain West Conference last season. The Cougars remain undefeated against the Cowgirls, sporting a 3-0 advantage, including a deciding 163-42 win at Gibb Pool Nov. 20, 1992. Washington State and Wyoming haven’t met since the 1993-94 season, when WSU took home a 50-36 victory.

LAST TIME IN THE POOL
The Cougars went 1-1 last weekend, earning their third dual meet of the season after defeating Northern Arizona, 135-126, Friday. Sophomore Taylor McCoy led the Cougars against the Lumberjacks with three individual wins. The Pullman, Wash. native won both backstrokes after posting a season-best 58.14 in the 100 back. McCoy also hit a season-best 2:07.36 in the 200 IM for first place. Alongside teammates Linnea Lindberg, Emily Barrier, and Chloe Larson, McCoy swam the opening leg of the winning 200 medley relay team. Junior Ryan Falk also swam well for the Cougars, earning a win the 1000 free and swimming anchor for the first-place 400 free relay team. Freshman Keiana Fountaine earned four top-five finishes against the Lumberjacks, including a win in the 100 free with a season-best 51.08. Fountaine carried this success into the meet against No. 5 California, when she dominated in the 200 free, finishing over two seconds ahead of Keaton Blovad from California and etching her name in the WSU All-Tim Top-10 with a 1:49.52 finish. The Tracy, Calif. native also took second in the 100 free and 200 free relay alongside teammates Barrier, Paige Gardner, and Larson. Sophomore Mackenzie Duarte notched second place in both the 100 and 200 breast. The Walnut Creek, Calif. native also took third in the 100 fly. Freshman Paige Gardner, (24.52, 50 free) sophomore Chloe Larson (1:01.52, 100 fly), and junior Ryan Falk (1:53.47, 200 free) each hit season-best times in their respective events.

KEIANA FOUNTAINE MAKES A STRONG IMPACT
Freshman Keiana Fountaine is having an outstanding rookie campaign, tied for a team-leading seven wins, while also being a member of five winning relays. The Tracy, Calif. native clocked an impressive 24.02 in the 50 free in the first invite of the season, just a half of a second outside of the WSU All-Time Top-10. The freshman is also ranked in the Top-25 in the Pac-12 in two events. Fountaine’s time of 51.08 in the 100 free ranks her tied for 14th, while a 1:49.52 in the 200 free ranks her seventh in the conference and tied for seventh in the WSU All-Time Top-10.