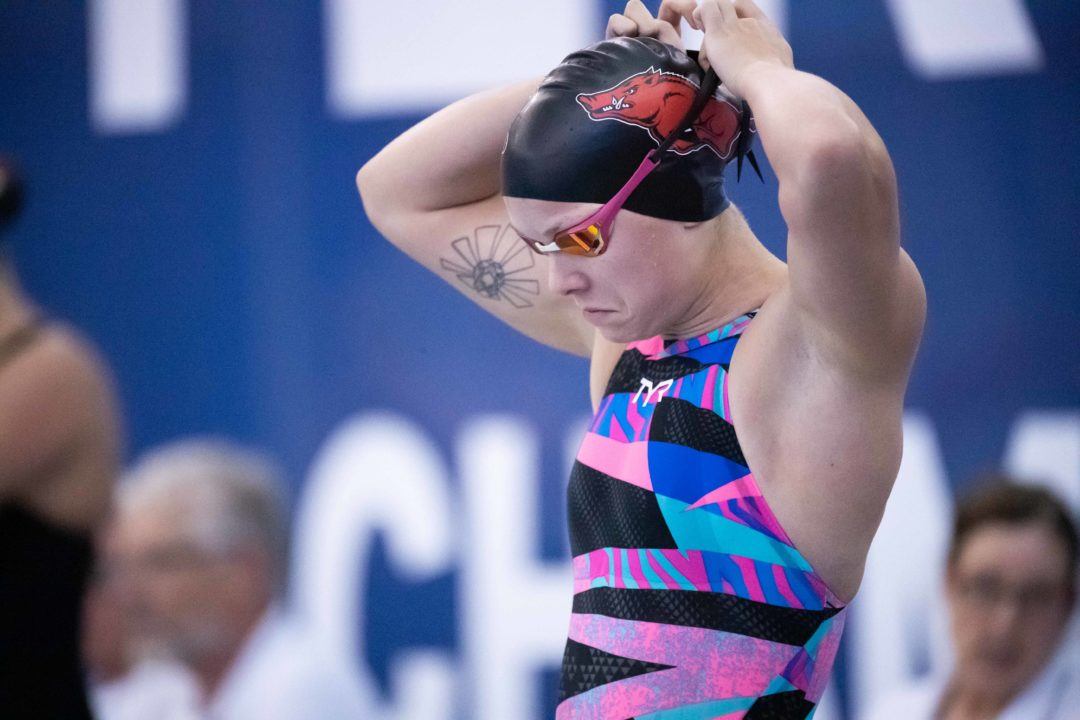 Anna Hopkin is lighting up the NCAA after completing her undergraduate degree in England. Current photo via Mike Lewis/Ola Vista Photography

Among the new names climbing the women’s NCAA leaderboards this season – freshmen Taylor Ruck, Maggie MacNeil, Sophie Hansson, and the likes – one stands out in that it belongs to a 22-year-old with junior class status: Anna Hopkin.

Named the 2018 British Universities & College Sport’s Sportswoman of the Year, the sprint-freestyler Hopkin graduated from Bath University in July. Having completed her undergraduate degree in sports and exercise science, she enrolled at the University of Arkansas to go for her Masters in kinesiology.

“I only have three classes a week, each three hours, so I get a lot of time just to focus on swimming, and fitting in my studies,” Hopkin told SwimSwam. “It’s very different to back home – it’s just a lot more time for me.”

Hopkin explained that the NCAA does not count her years in England against her total allotted to compete, but because her degree took three years, it was determined she has two years of eligibility remaining. So far, she’s making the most of what luxuries the NCAA has to offer.

“If we need anything, there’s so many people that are willing to help. So I think it’s just a better environment for success here.”

“We get a lot of support here in terms of nutrition. I don’t really have to cook any meals or anything. Everything’s on-site,” she explained. “We have our athletic trainer who’s with us every single training session basically, whereas in England I would get one ‘physio’ slot a week. And then I would cook and prep all my meals in England. If we need anything [here], there’s so many people that are willing to help. So I think it’s just a better environment for success here”

In addition to the lifestyle changes, of course, is that of swimming meters to swimming yards. While Hopkin noted she had a lot of short course meters experience, short course yards was foreign – and so was the short stint in long course meters when she competed at US Winter Nationals.

“I think because I’m a sprinter, I’ve adapted quite well,” Hopkins said. “I wasn’t quite sure how I was going to adapt to going back to long course, because obviously, we haven’t really done any training long course, but I just did Winter Nationals and my times were PBs, so I guess it’s transferring pretty well.”

And at Nationals, Hopkin got to experience the culture of swimming in the U.S. at effectively its highest level.

“I swam next to Simone [Manuel] three different times, which was awesome, and I think it was just exciting sort of going there, not really knowing who anyone was – obviously I knew Simone – and they didn’t really know who I was,” she said. “I think Neil [Harper] got a few questions like asking who I was and where I come from, but it was just quite nice to race some new people, and U.S. Nationals is a lot faster than what it would be in England.”

“So it’s just quite nice for me to get in with no pressure and just try and do some good swims,” Hopkin said.

“Even if you’re feeling tired, you’re not just swimming for yourself, you’re swimming for the team. You kind of pull out a bit more than maybe you thought you could.”

Another important aspect of college swimming in the States is doing so for a team – an option most Americans simply take for granted in the trajectory of a typical career. While Hopkin did previously compete on behalf of Bath, it wasn’t with the frequency or intensity of the NCAA.

“When you’re a university in England, your focus is more on just your individual swims, not necessarily in the university competition. We’re all gearing up for say Nationals or British Champs, really,” Hopkin explained. “There’s only two actual university competitions a year, compared to doing them almost every week over here. So there’s a lot more opportunity to race out here I think – and race when you’re tired as well.”

“I’ve never been in such a big team, it just kind of makes you want to swim well for the team, and obviously we do a lot of relays, and we’re earning points for the team,” she said.

But Hopkin’s presence is also emblematic of good things to come in Arkansas’ program at large. At the 2018 Winter Junior Championships – West, an all-freshman Arkansas team of Kobie Melton, Molly Moore, Brittney Pike, and Andrea Sansores de la Fuente placed fourth overall with a 3:21.13. Before this season, Arkansas had four women ever go sub-50 in a 100. Already this year, Melton (49.62 leadoff split) and Hopkin have, and Moore nearly did with a flying start (50.09).

“Even if you’re feeling tired, you’re not just swimming for yourself, you’re swimming for the team. You kind of pull out a bit more than maybe you thought you could,” said Hopkin. “I liked the sort of team atmosphere, like the cheers and the chants, and everyone getting behind each other. You don’t really get that much in the university competitions in England.”

If she’s really only taking 9 hours per week than that is against the NCAA minimum.

She has 9 hours of scheduled class time. Not the same as “taking 9 hours.” Probably some independent/self-directed study work going on, too. She’s a grad student, not a Freshman who in a bunch of Gen Ed classes.

NCAA rules is that you must be enrolled full time to compete. 9 hours is considered full time in graduate studies. Football players do it all the time now with redshirts/graduating early/transferring