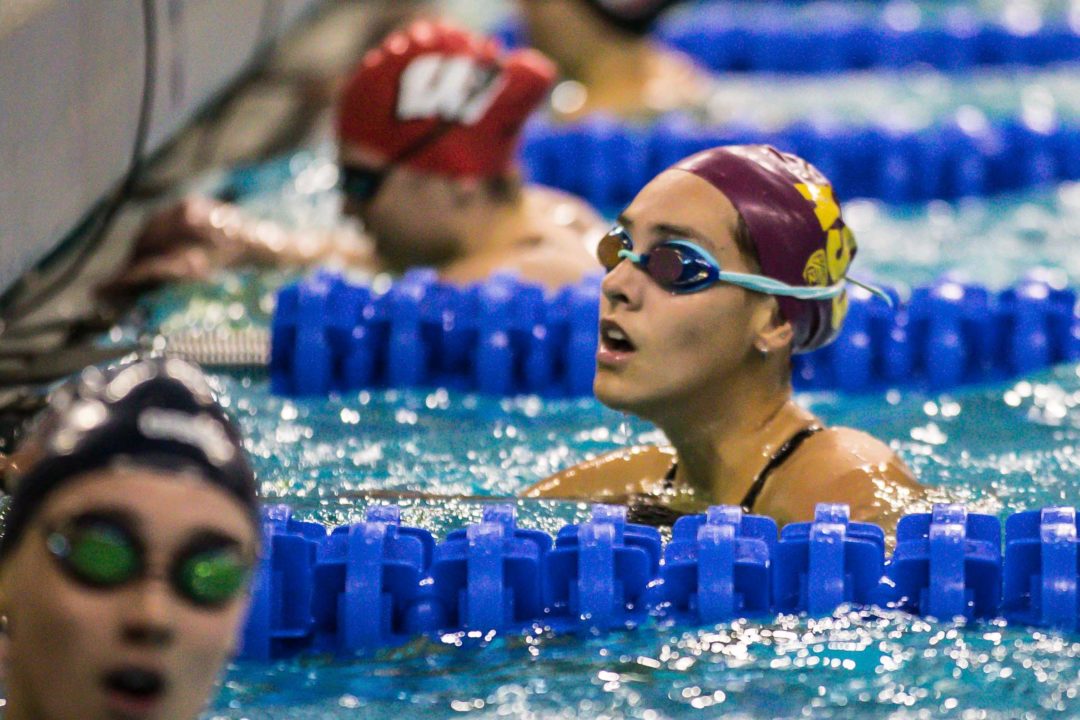 All American senior Emma Nordin (above) won the 1000 free, as 10 different Sun Devils to won events on Friday against UCLA. Current photo via Jack Spitser/Spitser Photography

The Arizona State Sun Devils welcomed the UCLA Bruins to Mona Plummer Aquatic Center in Tempe on Friday and came out on top 173 to 121. The Sun Devils were dominant across the board on the day, winning all but two individual events along with a non-traditional dual meet relay.

Arizona State displayed their depth on Friday, with all 10 of their individual event wins coming from different swimmers. The Sun Devils’ distance group flexed its muscle early with a 1-2-3 finish in the 1000, with All American redshirt senior Emma Nordin leading the way in a season-best 9:59.94. The Carmel, Indiana native later returned to finish second in the 500 free in 4:52.72. Winning the 500 free was freshman teammate Molly Batchelor, who made her Arizona State debut on Friday by also finishing second to Nordin in the 1000. Batchelor is an Australian native who has competed for her home country internationally at the FINA World Junior Championships and the FINA World Cup series.

Arizona State’s butterfly group was also impressive, with redshirt sophomores Lindsay Looney and Jade Foelske trading wins. Looney, a native of Denison, Texas took the longer fly race, winning the 200 in 1:58.97 and also finished second in the 100 in 55.07. Foelske, a native of Brookhaven, Georgia, did the opposite by winning the 100 fly and taking second in the 200. In the former, Foelske took the lead early and never let go, touching first in 53.96. In the latter, she faded on the 2nd 100 to finish second to Looney in 1:59.46. Both swims for both Foelske and Looney clocked in as season bests.

Leading the way for the Bruins were Sophia Kosturos and Ella Kirschke, who each won an individual event on the day. Kosturos, a junior from Orinda, California, won the 100 back in 55.25, just outtouching ASU’s Riley Lexvold. Kosturos’ season best sits at 54.73 from UCLA’s dual meet against Washington State last weekend. Kirschke, a senior from Lone Tree, Colorado, won the 200 IM in 2:02.04. That time sits off her season best of 2:01.77 from two weeks ago.

Also notable from the meet was the inclusion of the 800 free relay, which Arizona State dominated with a 1-2 finish. ASU’s A team took the win in 7:23.93 and was led by Molly Batchelor’s 1:48.97 leadoff split.

After a weekend trip to Arizona, UCLA will return to the pool for the Ohio State invite November 18th-20th, while Arizona State will next travel to North Carolina for the NC State invite on that same weekend.

Unfortunately for ASU since they don’t have a diving team they must start 32 points behind at home meets. ASU men actually beat USC in swimming but the diving points cost them

That also means they have money scholarship money invested into swimming?!? And why did they get rid of diving? No one twisted their arm to not hire a coach or have divers?
Ask Cal men about winning the swimming ncaas but losing to Texas cause Texas has diving and swimming! Not having diving is like not having breastroke….

Actually, they do not have money… that’s pretty much the whole reason they currently do not have a diving program. Try again