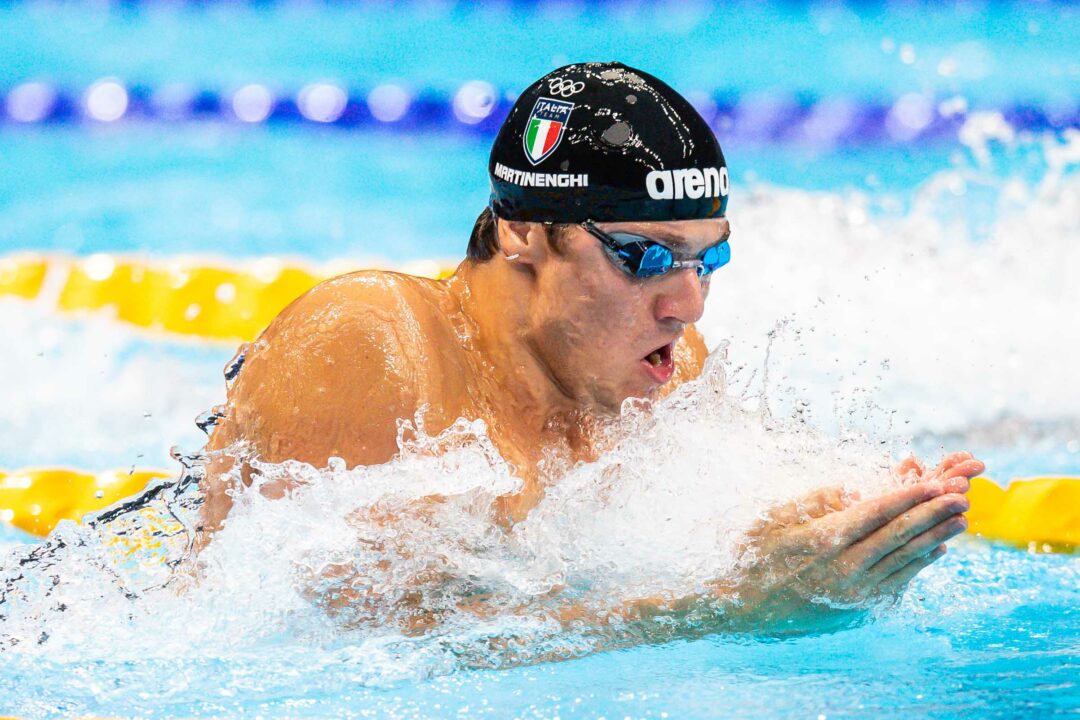 Nicolo Martinenghi, Alessandro Miressi, Silvia di Pietro, Lorenzo Mora, and Matteo Rivolta broke five Italian National Records on the penultimate day of the 2021 European Swimming Championships in Kazan, Russia on Saturday. Four of the Italian Records broken Saturday came during semifinals, meaning each swimmer may yet improve upon their results in the finals on the final day of competition on Sunday.

First, Matteo Rivolta blasted a 22.14 in the final of the men’s 50 butterfly to lower Thomas Ceccon‘s day-old Italian Record of 22.19 and win the silver medal behind victor Szebasztian Szabo of Hungary who equaled the World Record of 21.75. Ceccon, meanwhile, won the bronze medal in 22.24, finishing just 0.05 off his former record and lifetime best.

Shortly after the excitement of the men’s 50 butterfly, Nicolo Martinenghi popped a 25.37 in the second semifinal of the men’s 50 breaststroke to break Fabio Scozzoli‘s mark of 25.62, first posted at the 2017 European Championships in Copenhagen and then equaled in London during the inaugural season of the International Swimming League. Martinenghi’s time is a whole 0.25 faster than Scozzoli’s mark and also comes as a new Course Record. Turkey’s Emre Sakci posted a 25.38 in the first semifinal to snag the Course Record for himself, only to see it broken by the smallest of margins moments later by Martinenghi. Sakci’s time, meanwhile, falls just 0.09 of his own Turkish Record in the men’s 50 breaststroke.

Shortly after the men’s 50 breaststroke, Alessandro Miressi posted a 45.87 in the first semifinal of the men’s 100 freestyle, slicing 0.03 from his own former record set at the 2019 European Championships in Glasgow. Miressi was slightly faster on the first 50 today in Kazan than two years ago in Glasgow, albeit a little slower on the second 50.  Miressi will be the 2nd seed in the final, just behind Russia’s Kliment Kolesnikov who qualified first with a 45.85.

Shortly after Miressi’s swim, Silvia di Pietro posted a 25.03 in the semifinals of the women’s 50 butterfly to shave 0.15 from her own previous mark and qualify 2nd for the final, behind Sweden’s Sarah Sjostrom. Di Pietro’s former record of 25.18 was established in April of 2021 at the Italian Regional Championships. This is the second best time for di Pietro in the 50 fly in 2021. Di Pietro’s previous best time and former Italian National Record of 25.22 was set at the 2015 European Championships (SCM).

Finally, in the last individual event of the day, Lorenzo Mora posted a 1:50.17 in the men’s 200 backstroke, slicing 0.27 from his former mark set at the 2019 Nico Sapio Trophy. Mora was not out quite as fast as he was in 2019 but produced a monster second half to earn a new lifetime best and qualify first for the final on Sunday.