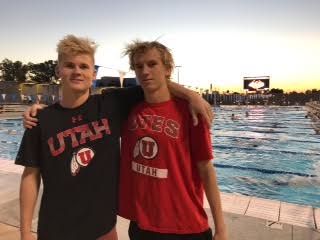 The Utah men have added some top talent from the state of Arizona to their recruiting class, as they've just received a pair of verbals from 2016 Arizona state champions Cameron Heidenreich and Clay Stoddard. Archive photo via Tim Binning/TheSwimPictures.com

The Utah men have added some top talent from the state of Arizona to their recruiting class, as they’ve just received a pair of verbals from 2016 Arizona state champions Cameron Heidenreich and Clay Stoddard. The two swimmers are already teammates at Phoenix Swim Club, but Heidenreich represented Horizon High School at state while Sttoddard swam for Arcadia High School.

Heidenreich is a versatile swimmer, but his main focus at championship meets has been on the breast and IM races. At last week’s 2016 Arizona Division 1 State Championships, he swam his way to multiple gold medals, winning the 200 IM and 100 breast. In the 200 IM, he dropped a presonal best 1:50.83 to take a big win, following that up with another personal best 56.28 to win the 100 breast.

A day after the state meet, Heindenreich took a crack at the 100 back and 100 free at the Senior Time Trials, swimming to new best times of 50.87 and 46.00 in those events respectively.

At Utah, Heidenreich will be joining an IM group that includes some of the top swimmers in the Pac-12. He’ll be training alongside Daniel McArthur, Cole Avery, and Brandon Deckard, who each scored in the B-final of the 200 or 400 IM at the 2016 Pac-12 Championships. Additionally, he’ll be training for the 100 breast with Jack Burton, who scored in the B-final of that event at 2016 Pac-12s.

Stoddard is primarily a sprint freestyler, but he’s also got stong potential in sprint fly since he’s taken the fly position on his team’s medley relays. He was a 2-time medalist at the 2016 Arizona Division 2 High School State Championships last weekend, where he swam the 50 free and 100 free. Stoddard knocked a full second off his 100 free, claiming his state championship title in 46.27. In the 50 free, he also went a personal best, charging to a 21.18 to bring home the silver.

At Utah, Stoddard will be training with now-junior Sean Bloore, who made it to the C-final of the 50 free and 100 free at the 2016 Pac-12 Championships. Brandon Deckard and Cole Avery will also make good training partners for the 100 fly, as they both scored in the B-final of that race at 2016 Pac-12s.

does not change much. since mike left – and the hole that was then in between…. this is the basement of that 12