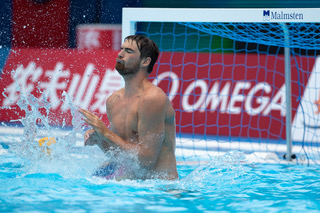 Argentina, Brazil, Canada, and the USA are heading to the men's water polo semifinals at the Pan Am Games after posting quarterfinal wins on Thursday. Current photo via “Rafael/Domeyko Photography”

Argentina, Brazil, Canada and the United States are heading to the men’s water polo semifinals at the Pan American Games after posting quarterfinal wins on Thursday.

In Friday’s semifinals, Canada will face Brazil, while Argentina is set to take on the USA. The slate also will include the fifth through eighth place classification matches.

Mexico boasted an 8-7 advantage at the half, but Canada outscored its foe 6-3 in the final 16 minutes to pull out the 13-11 victory.

Canada made 43 percent of its shots (13 of 30), including 3 of 4 extra-man tries and its lone penalty. Nicolas Constantin-Bicari and Reuel Mark D’Souza each put in four goals to lead the way. Goalkeeper Milan Radenovic stopped 42.1 percent of the shots she faced (8 of 19).

Mexico converted 11 of its 29 shots (37.9 percent), including 4 of 10 extra-man tries and all three of its penalty attempts. Oliver Alvarez Basillo led all scorers in the game with five goals, while six other players chipped in a single goal.

Argentina built a 5-3 lead at the half, before splitting the final eight goals with Cuba in a 9-7 victory.

Argentina had help from goalkeeper Diego Herman Malnero, who stopped 58.8 percent of the shots he faced (10 of 17). Offensively, the team made 34.6 percent of its shots (9 of 26), including 5 of 11 extra-man tries. Ramiro Andres Veich, Guido Gabriel Martino, Ivan Martin Carabantes and German Ignacio Yanez each turned in a two-goal performance.

Cuba got five goals from Giraldo Carales Manzano and two from Jose Peralta Rodriguez. As a team, Cuba made 7 of 25 shots (28.0 percent), including 2 of 7 extra-man tries and all three of its penalties.

The Americans built a 12-2 lead at halftime and then blanked Peru 12-0 over the final 16 minutes to register a 24-2 and punch their ticket to the semifinals.

The USA put in 64.9 percent of its shots (24 of 37), including 7 of 11 extra-man opportunities and all three of its penalty tries. Ben Hallock and Alex Bowen each scored four times, while Johnny Hooper, Marko Vavic, Luca Cupido and Hannes Daube each notched hat tricks. Nine players scored for the United States, including seven multi-goal efforts. Goalkeeper Alex Wolf saved 77.8 percent of the shots he faced (7 of 9).

Julio Alzamora Garcia and Diego Villar Osterling each managed a single score for Peru. The team made just 2 of its 16 shots (12.5 percent). The Peruvians did not any extra-man or penalty opportunities.

Brazil allowed Puerto Rico one goal in each quarter, while pouring on four or more goals in each of the first three stanzas en route to a 15-4 victory.

Brazilian goalkeeper Slobodan Soro saved 6 of the 10 shots he faced (60 percent), while his offense managed 15 goals in 27 shot attempts (55.6 percent). The Brazilians made good on 6 of 13 extra-man tries and 1 of 2 penalty attempts.

Puerto Rico got two goals from Misael Andino Montanez and a goal each from Jose Loubriel Cuyar and Fernando Zayas Sanchez. The team scored on just 4 of 16 shots, but made good on 2 of 7 extra-man tries and both of its penalty attempts.