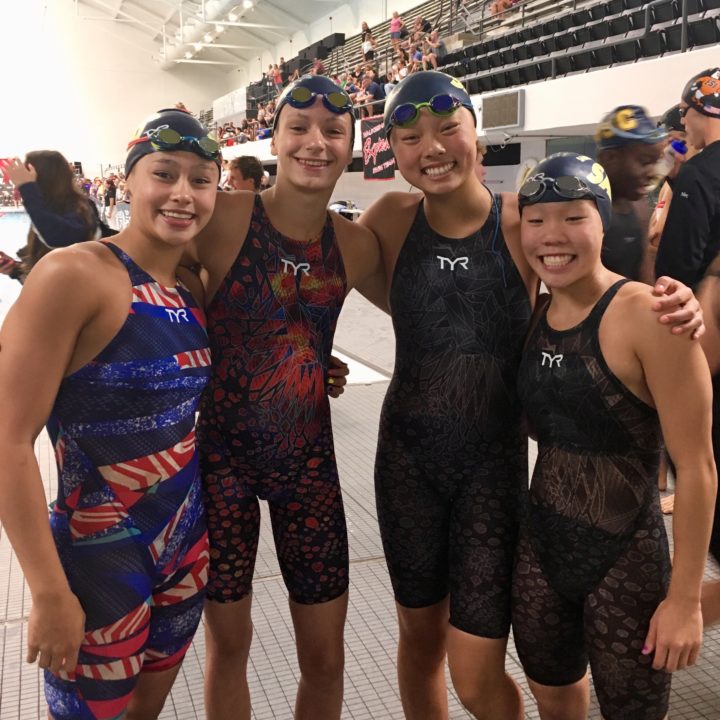 They took down an impressive relay record, one held by Nashville Aquatic Club since 2016 which featured Alex and Gretchen Walsh. Current photo via Michael Kinross

After breaking the 200 free relay 13-14 NAG record on Tuesday, the Sandpipers of Nevada came back to break another NAG record, this time in the 400 free relay.

Kathryn Grimes, Arabella Sims, Paige Kuwata, and Audrey Yu, the same four who set the 200 free relay record, returned to set the 400 record. They took down an impressive relay record, one held by Nashville Aquatic Club since 2016 which featured Alex and Gretchen Walsh.

G. Walsh’s split was unmatchable for the Sandpipers’ of Nevada, but they were more consistent across the board tonight, and combined for a time that was nearly a full second quicker than Nashville Aquatic Club’s.

What’s even more impressive from this quartet tonight is that it came not long after Grimes, Sims, and Kuwata had gone 1-2-3 in the 400 IM. The 13-year-old Grimes hit an Olympic Trials cut with that swim, too.

The splits and swimmers are wrong. Audrey Yu went second with a 57.60
And Katie Grimes went anchor with 57.51.

Even more impressive… Sims +.9 from her time earlier in the week…