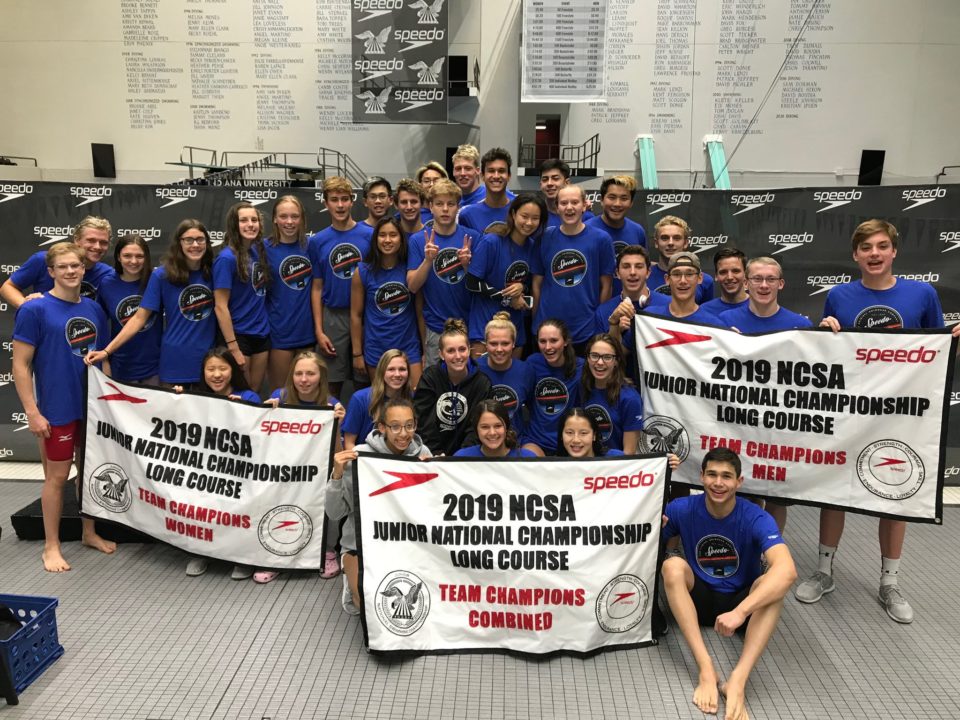 Three of the four NAG record-breaking 200 free relay pictured above wound up on the podium of the women’s 400 IM tonight.

Final Individual High Point and overall team titles have been awarded at the 2019 NCSA Junior National Championships in Indianapolis.

The team from the Nation’s Capital Swim Club in the Washington D.C. area reclaimed their spot atop the meet’s podium after finishing just 3rd and 8th in the girls’ and boys’ standings last season. This year, they dominated all 3 meet titles, winning the boy’s crown by 102.5 points, the girls’ crown by 450 points, and the combined title by more than 1000 points ahead of the Academy Bullets Swim Club in Illinois.

In the individual awards, on the girls’ side, the Sandpipers of Nevada had 3 swimmers place in the top 7 among individual point scorers (based on actual points earned for their teams, not power points). The Sandpipers stood out at this meet for the success of their young core of swimmers that vaulted up National Age Group rankings and became some of the youngest qualifiers for next year’s Olympic Trials. In fact, all 3 of those top 7 swimmers they had are aged 14-or-younger. Nobody else that young placed in the top 18 in the girls’ high point scoring.

The girls standings were led by 14-year old Arabella Sims, who won in spite of not topping a single event. She amassed big points via runner-up finishes in the 400 free, 200 IM, and 400 IM, and 2nd-place finishes in the 200 free and 800 free.

Letitia Sim (similarly named, but no relation) swept the breaststroke events at the meet and swam 1 fewer race than did the winner Sims.

In the boys meet, Tristan Dewitt came away with top honors. He won 1 event, the 200 breast, and finished 2nd in 3 others: the 100 breast, 50 fly, and 100 fly. The runner-up, Cason Wilburn won the two butterfly events where Dewitt finished 2nd (the 50 fly and 100 fly) and added a 3rd victory in the 100 free. His 3 individual event wins were the most on the boys’ side of the meet.

And congratulations to Suburban Seahawks Coach Charlie Kennedy for being voted NCSA Coach of the Year. Coaching SSC and in the sport of swimming for 35+ years!

Alex Massey was DQ’d for a back to breast bucket turn in the 400IM, where she was the 6th overall seed, probably costing her the high point award. Tough break

Of the Top 3,how many swimmers did each team bring, Any body know actual teams sizes of the top finishing teams?

If you have the meet mobile app you can click on each team and see who they entered.