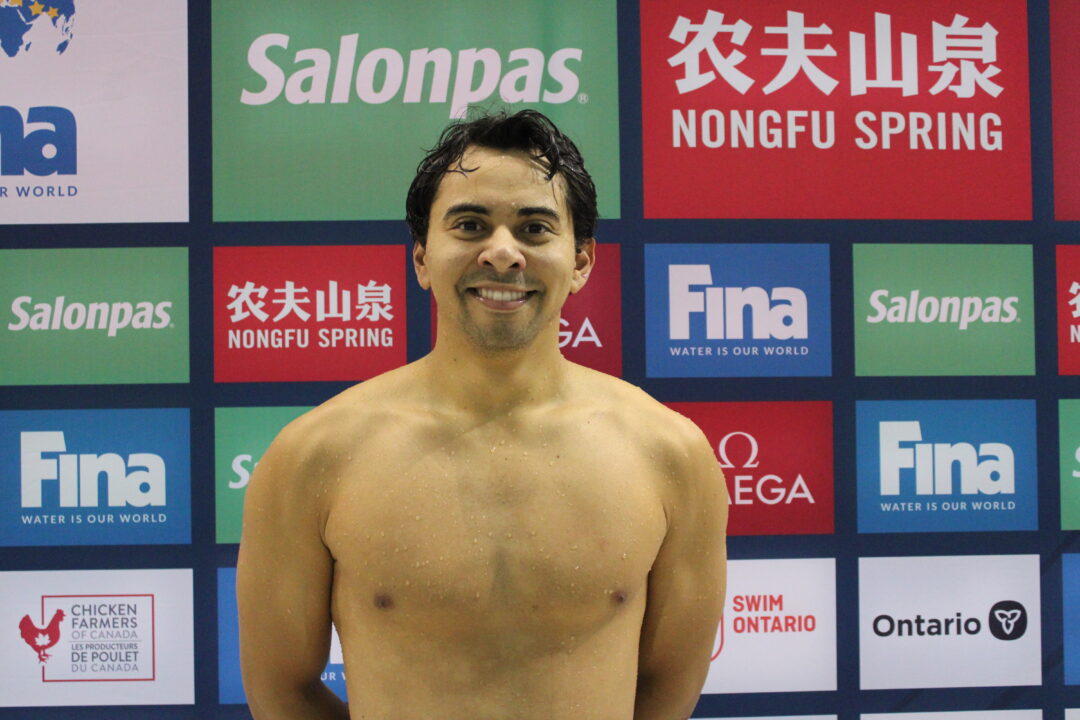 Acevedo has been consistently improving in recent years, and now owns five different SCM Canadian Records after his 200 back and 100 IM double in Indy. Archive photo via Ben Dornan

It wouldn’t be the correct wording to call Javier Acevedo‘s recent run of success a career resurgence—he’s been good all along—but the two-time Canadian Olympian has shown an incredible ability to consistently improve at an age where swimmers typically tend to plateau.

Acevedo has been on fire throughout the three-stop FINA World Cup circuit, which concludes on Saturday in Indianapolis. During the opening night of finals on Thursday, the 24-year-old broke a pair of Canadian Records in the men’s 200 back (1:49.74) and 100 IM (51.38) to continue his steady rise.

The 200 back performance in particular stands out as, coming into the series, he had only broken the 1:52 barrier once, and it appeared to be an event he was putting on the back burner as he continued to excel in the sprint backstrokes along with the individual medley events.

Racing on home soil in Toronto last weekend, Acevedo put his full focus on the 200 back and it paid off, as he finished second to American Shaine Casas in a time of 1:50.76, knocking off his previous best of 1:51.47 and overtaking Cole Pratt (1:50.82) for the second-fastest swimmer in Canadian history.

Then, on Thursday in Indianapolis, Acevedo took another massive step forward, cracking 1:50 for the first time and taking down Markus Thormeyer‘s Canadian Record of 1:50.27 from November 2020.

Now the national record holder in five different SCM events, Acevedo will be one name to watch next month as he’ll get the opportunity to race at the Short Course World Championships for the first time since 2016.