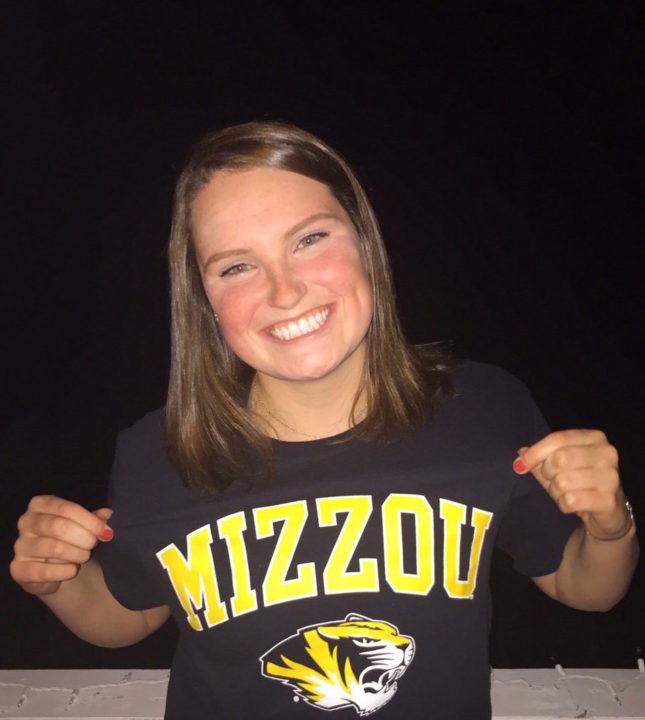 OT Qualifier Devan Sweeney, number five of seven siblings, has given her verbal commitment to swim for the Mizzou Tigers. Current photo via Twitter/@DevanSweeney

Devan Sweeney has made her verbal commitment to swim for the University of Missouri Tigers as part of the Class of 2021. Devan is the fifth consecutive Sweeney to commit to an SEC athletic program (4 out of 5 have been swimmers), but is forging her own path in committing to Mizzou.

I'm truly blessed to announce my verbal commitment to the University of Missouri! Glory to God! GO TIGERS! ????????⚫️ pic.twitter.com/WUs2KBI7Z1

Devan swims for Swim Atlanta and Brookwood High School, which are the respective club and high school teams of Olympian Amanda Weir. Devan has won the last three consecutive GHSA 6A state titles in the 200 IM, and will be looking for a four-peat as a senior. At this past year’s GHSA state championship meet, Devan broke Weir’s school record in the 100 fly (54.52), which qualified as an automatic All-American time.

Devan is probably the most well-rounded Sweeney swimmer to date. She qualified for this summer’s Olympic Trials in the 400 IM (along with older brother Aidan), but she is also strong in the individual fly and back events.

With one more full season to train before heading to Columbia, Missouri, Devan could easily be a point-scorer as a freshman. Her contributions will help the Mizzou women’s team continue trending upward. Last season the program sent a record 7 individuals to NCAAs and had their highest finish in school history (11th). Devan will have one year to train alongside Mizzou’s top IMer, Sharli Brady, and three years to train with Peruvian butterflier, Azra Avdic.

That sure is an athletic family, I’m sure she will excel there! Great school.

Great family and happy to seeing them succeed in life !