"I’ve watched him day in, day out, and where he has started from and where he is right now is a testament to being tough. He’s got a lot of character.” - Jack Bauerle 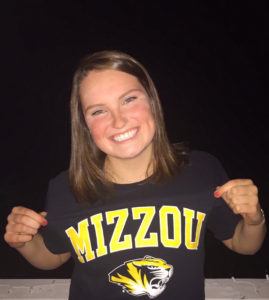 OT Qualifier Devan Sweeney, number five of seven siblings, has given her verbal commitment to swim for the Mizzou Tigers.

Aidan Sweeney
Aidan Sweeney is a freestyle swimmer at the University of Georgia who’s currently undecided on a major. He’s a Georgia local coming from Snellville, Ga. where he graduated from Brookwood High School and swam for SwimAtlanta under Coach Chris Davis. Growing up in the state of Georgia, Sweeney grew up watching SEC sports making him a huge football fan. Born March 23, 1994 Sweeney is currently a redshirt sophomore as he sat out his freshman season at Georgia. Sweeney decided to redshirt after suffering a painful back injury his junior year of high school. He had a herniated disc in his LSF-1, and was told he could continue swimming, if he could deal with the pain. After a couple years of toughing it out, Sweeney decided to finally go through with a spinal fusion procedure. He was finally able to compete, after about six months after surgery, as a Bulldog on Nov. 13, 2013.

University of Georgia
2012-2013
Sweeney sat out his freshman season as a medical redshirt.

2013-2014
In his first competitive season as a Bulldog he received the Ramsey Scholarship for Academic and Athletic Excellence, named to both the Athletic Director’s Honor Roll and the Dean’s List in addition to the Winter SEC Academic Honor Roll.

National Competition
During his career at Brockwood Sweeney was named to the USA Swimming Scholastic All-America Team, and won state titles in the 1,500m freestyle and the 400 IM in 2011. He was a high school All-American as a member of his high school’s 200 freestyle relay in 2010.