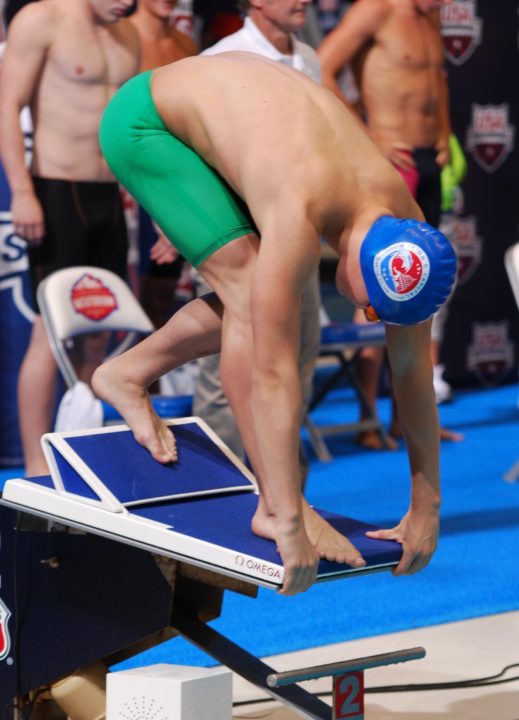 On day five of the Junior National Championships in Irvine, California, Andrew Seliskar won the 200 IM with a time of 2:00.26. His winning time beat Micheal Phelps‘s 15-16 National Age Group record set in 2001 at 2:00.86. Seliskar was the youngest swimmer in the final heat of the 200 IM.

To put this swim into perspective, at the age of 15, Michael Phelps had qualified for his first Olympics, and finished in fifth place in the 20o meter butterfly. He was the youngest male Olympic Swimmer from the United States since 1932. It was very easy to recognize that Michael Phelps was fast, but very few could have predicted where his career was going to lead him. Phelps is now the most decorated Olympian of all time, and he left behind a long list of records for young swimmers to chase after.

Andrew Seliskar, the 16 year-old from Nations Capital Swim Club beat Phelps’ best time at that age by over half a second. Several young swimmers have been getting closer to Phelps’ records. Justin Lynch broke one of his 100 butterfly records at the World Championships Trials in June. Tonight, Seliskar was not the only swimmer to take down one of Phelps’ NAG records. Michael Andrew, the youngest professional swimmer in USA Swimming history, also broke his 13-14 NAG record in the 200 IM just moments before Seliskar won the event.

It will be very exciting to watch all of these young stars progress throughout their careers.

You can read about Michael Andrew’s record breaking swim here.

Since Andrews is a pro now, did he make any money for his two NAG records?

How much does USA Swimming pay for each NAG record?

The announcer in the pool was aware of the NAG records for Michael Andrew but has forgotten the NAG record of Mr Seliskar in the 200 IM.
Congrats to him! What a year he has so far!

The heir of Michael Phelps!

He still has a long way to go! But it’s promising.

I hope they hire you someday. 🙂

could get a great job and well paid for ! lol

I don’t dare to make critics anymore! Yesterday I’ve made a comment to rectify a swimswam contributor and it looks like she hasn’t appreciated and has said I should have used my head before. 🙂