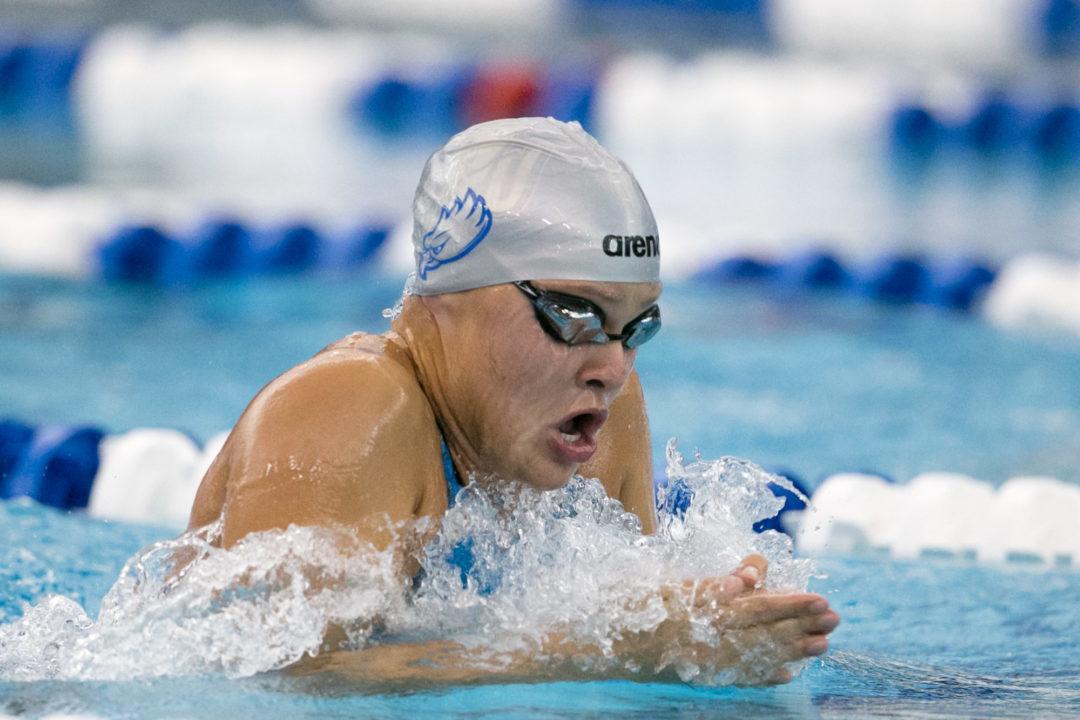 Junior-to-be Katie Armitage will transfer from Florida Gulf Coast to the University of Tennessee this fall. Armitage has one first-team All-American... Archive photo via Tim Binning/TheSwimPictures.com

Junior-to-be Katie Armitage will transfer from Florida Gulf Coast to the University of Tennessee this fall. Armitage has one first-team All-American honor to her name – coming in her freshman season, where she swam the breaststroke leg on FGCU’s 8th-place 200 medley relay at the NCAA Championships.

Tennessee will now be home to the front-half of that All-America-earning medley relay, as senior-to-be Kira Toussaint, the former FGCU backstroker, transferred to Tennessee prior to last season.

“I’m super excited to be joining such an amazing team,” Armitage said. “I’m truly blessed that I have been giving this opportunity. I cannot wait until next season to start racing as a Tennessee Vol!”

Armitage swam both individually and on relays at the 2015 NCAA Championships and placed 46th in the 100 yard breaststroke – short of her 1:00.28 season-best time.

Her sophomore season at FGCU wasn’t as fruitful, and she didn’t swim at last year’s NCAA Championship meet either individually or on a relay.

If she regains her rookie-year form, Armitage will be one of the most significant off-season pickups for the Volunteers. Last year, non-breaststroker Maddy Banic was pressed into 200 medley relay duty on the breaststrokes. Armitage is around a second better than Banic over 50 yards and holds a similar margin over sophomore-to-be Hannah Holman for the 400 medley relay, which didn’t score at NCAAs last year.

Armitage’s addition becomes even more crucial because Tennessee graduated the back-half of their 14th-place 200 medley relay from last year’s NCAA Championships, and her presence will allow Banic to slide to the butterfly or freestyle legs, which gives Tennessee 75% of a top-5 caliber NCAA 200 medley relay.

As for Florida Gulf Coast, they still return Evita Leter, who was a 1:01.10 on a flat-start in the 100 breaststroke as a junior last season. That was only two-tenths behind what Armitage went in 2016.

Is FGSU becoming a pipeline for Tennessee? if so, that really sucks.

So what’s the big to-do about the coach at FGCU? It seems like he loses his best swimmer every year

FGCU sent 3 swimmers to NCAAs last year, and Katie wasn’t one of them. Not sure she counts as their ‘best swimmer.’ The team keeps winning – it’s not like Auburn and FSU where kids are leaving en masse and it’s clear the program is falling apart. 2 transfers out in 2 years? That’s not enough to make me worried

You think maybe that is why she is transferring? She went 1.08 LCM before she went to FGCU, Studd has yet to improve a high class swimmer that he has brought in.

Think her relay split at CCSA’s was 27.0 which was one of the fastest in the NCAA this season, put that into the Tennessee equation and they will have an awesome team.

Wow, they are looking dynamite. Let’s not forget they brought in arguably the most versatile relay swimmer of the class, Meaghan Small. https://swimswam.com/ranking-2016-womens-ncaa-recruiting-classes-5-8/

I agree. They have diving, sprinting, all strokes and the best distance program in swimming. The vols could surprise a lot of teams at NCAAs this year. I am picking them as dark horse winners. A;though Stanford might beat them.