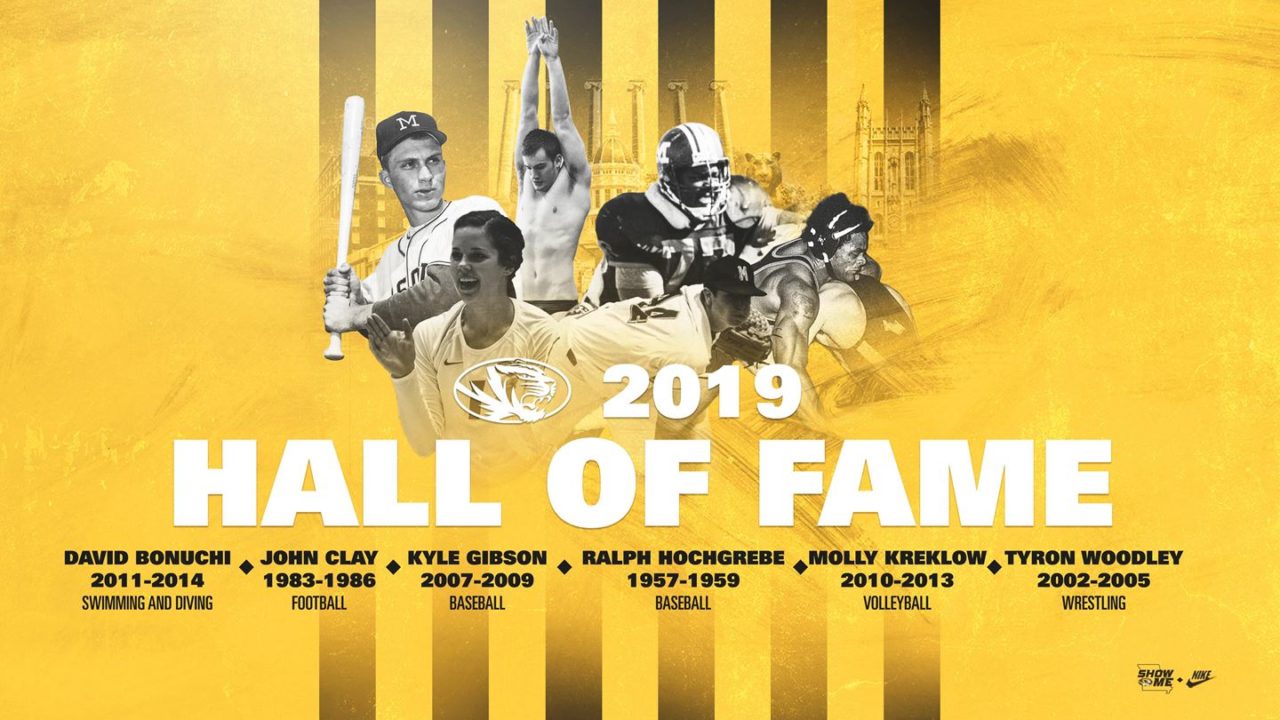 Streett is a strong freestyler, though he especially excels in mid-distance, toting a nice 1:37.0 in the 200.

The Aggies rounded out their 2019-20 recruiting class with the addition of swimmer Thomas Shomper and diver Shane Mardick.

COLUMBIA, Mo. – Six outstanding former University of Missouri athletic figures have been selected for induction into Mizzou’s Intercollegiate Athletics Hall of Fame.  They will represent the 29th induction class since the Hall’s inception in 1990.

The class will be formally inducted Fri., Nov. 15, in a ceremony and celebration to be held that evening Columbia (with details forthcoming).  The group will also be recognized at the Mizzou Football home game the next day against Florida.

The 2019 class includes standouts who have been among the best in Mizzou history in their sports.  Here is a look at this year’s inductees:

David Bonuchi – Men’s Swimming & Diving (2011-14)
Hometown product who became one of the top divers in school history, and who helped establish the Tigers as a perennial Top 25 program … Won 10 first-team All-American honors at NCAA Championship events (the most individual first-team honors in MU men’s history), out of 12 opportunities, including a runner-up performance on the platform as a sophomore in 2012 … Also turned in five additional top-four NCAA finishes, including third place at one-meter (2013), fourth place at platform (2001 and 2014), fourth place at three-meter (2012) and fourth place at one-meter (2014) … Was the 2013 Southeastern Conference Male Diver of the Year, and won the 2013 SEC Commissioner’s Trophy, which is awarded each year to the high point performer at the SEC Championships, where he won both the one-meter and three-meter springboard competitions … Won three conference championships in all, as he claimed the three-meter crown in the Big 12 Conference in 2012 – becoming MU’s first-ever Big 12 diving champion … Still holds Mizzou’s platform scoring record (456.0) and also ranks second in the one-meter (416.05) and three-meter charts (444.85).

John Clay – Football (1983-86)
One of the most dominant offensive linemen to ever suit up for Mizzou, despite playing on Tiger teams that didn’t have sustained success … Was a consensus All-American in 1986, while also winning second-team All-America honors from the Associated Press in 1985 … As a sophomore, took home third-team All-American acclaim from Football News … Was a three-time first-team All-Big Eight pick (1984-85-86), joining former greats Johnny Roland, Gary Lane and Phil Bradley as MU’s only three-time all-conference selections during the Big Eight era … Even with opposing defenses keying on the Tiger running game, Clay helped pave the way for teammate Darrell Wallace to become the program’s all-time leading rusher at the time, including an 1,120 yard season in 1985, which was the second-best single-season rushing mark in program history … Selected to represent Mizzou in the prestigious East-West Shrine Game, as well as the Blue-Gray Game following his senior season, and later became a first-round draft pick of the Los Angeles Raiders … Played in the NFL for the Raiders and the San Diego Chargers, before a back injury cut his playing career short … A St. Louis, Mo. native who is currently the head football coach at Cahokia High School in Cahokia, Ill.

Kyle Gibson – Baseball (2007-09)
Flame-throwing righty who became one of the most dominant pitchers in Mizzou’s pitching tradition-rich program during his three years on campus … Was a Golden Spikes National Player of the Year semi-finalist as a junior in 2009, when he went 11-3 with a 3.21 earned run average and a school-record 131 strikeouts … Was an integral part of Mizzou reaching NCAA Regional play all three years with him as part of the rotation (2007-08-09) … Second-team Louisville Slugger All-American in 2009, as well as a first-team All-Big 12 selection that same season … His 304 career strikeouts rank second-most in Mizzou history, and are his 28 career wins … Had 11 wins as a sophomore, which rank as the second-most in MU single season history … Posted a career win-loss record of 28-10 overall, including 8-3 as a freshman, 9-4 as a sophomore and 11-3 as a junior … Pitched for USA Baseball’s National Collegiate Team, going 5-0 on the mound while earning the win in Team USA’s Gold Medal game at the 2008 FISU World Championships … Went on to become a first-round MLB draft pick in 2009 by the Minnesota Twins, taken as the No. 22 pick overall in the draft … Was named the Twins’ Minor League Pitcher of the Year in 2010, and through July 24 has 63 career wins at the Major League level … Is currently 9-4 on the 2019 season for first-place Minnesota.

Ralph Hochgrebe – Baseball (1957-59)
Highly-accomplished player and inspirational leader for the Tiger baseball program, who was a team captain in 1959, the same year he became the program’s first second baseman to win first-team All-American honors, when he hit an impressive .451 … Was the only player from the Big Eight Conference that season to earn first-team All-American honors … Also took home all-district and first-team All-Big Eight honors in 1959 as well, when he led the team to a 13-0 start, on the way to a 16-4 overall record that year on the field … His .451 batting average in 1959 is the fourth-best single-season mark in program history, and included a single-game record three triples in one game against Kansas State … Was a member of the 1958 Mizzou team that finished as national runners up at the College World Series … Later played for Team USA when it won the bronze medal at the 1959 Pan American Games … Was inducted into the St. Louis Amateur Baseball Hall of Fame in 1988 … Is joining the Mizzou Athletics Hall of Fame posthumously, as he passed away at the age of 78 in February of 2016 after a fight with cancer.

Molly Taylor (Kreklow) – Volleyball (2010-13)
Regarded among the top players in program history who helped Mizzou to record-setting achievements and unprecedented national prominence … Was the lynchpin behind the Tiger attack as a top-notch setter, winning first-team 2013 AVCA All-America honors, the same year she was named the Southeastern Conference Player of the Year … That season, she led Mizzou to arguably its best season ever, as the 2013 Tigers became the first-ever SEC team to post an undefeated regular season (34-0), on the way to a 35-1 overall mark while reaching the second round of the NCAA Tournament … That year, Mizzou was dominant, as it won 102 of 110 sets during the regular season, with zero matches that went beyond four sets, including 26 sweeps … Behind Kreklow’s direction, Mizzou led the nation in hitting, kills and assists as a team in the 2013 season, while breaking school records for total wins, conference wins, sweeps and hitting percentage … Had 5,366 career assists, second-most in program history, while her 11.36 assists per set ranks as third-best at Mizzou … Helped lead Mizzou to three NCAA Tournament appearances, where she produced four double-double performances individually … Was a two-time first-team All-SEC selection, while twice winning AVCA first team All-Region honors twice as well … Was one of the nation’s top freshmen in 2010, helping the team to a 22-11 record while reaching the Sweet 16 round of the NCAA Tournament … Was named the AVCA Central Region Freshman of the Year in 2010 … Mizzou was an impressive 97-37 in her four years, good for a solid 72.4% win rate … Also a standout in the classroom, who was a three-time academic all-conference award winner … Earned a spot on the 2013 USA Volleyball National Team following her Mizzou career.

Tyron Woodley – Wrestling (2002-05)
Mizzou’s first-ever Big 12 Conference champion who was a two-time All-American for the Tigers, as he played a key role in helping Coach Brian Smith elevate the program to one of national prominence … Compiled a career record of 110-38 as a Tiger, ranking him fifth on the school career wins list at the time of his departure … Was a three-time NCAA qualifier, and turned two of those appearances into All-American honors, with a best finish of seventh in 2005, preceded by an eighth-place showing in 2003 … An outstanding leader who was named a team captain three times during his career … Became Mizzou’s first-ever Big 12 champ when he won the 165-pound title in 2003 … A dominant wrestler on the mat, who ranks third in Tiger history with 10 career technical falls, while his 28 career major decisions rank as second-most in MU history … Won Academic All-Big 12 first team honors as a senior, and was a leader among the Mizzou student-athlete population, as he served as the Student Athletic Advisory Council (SAAC) president for one term … Has gone on to a very successful MMA career, eventually winning the UFC Welterweight Champion belt … Defended his title successfully four times, and has a UFC career record of 19-4-1, including seven wins by knockout and five by submission … As of June, stood as the No. 1-ranked contender in the UFC welterweight division and is ranked No. 14 in the all division rankings.