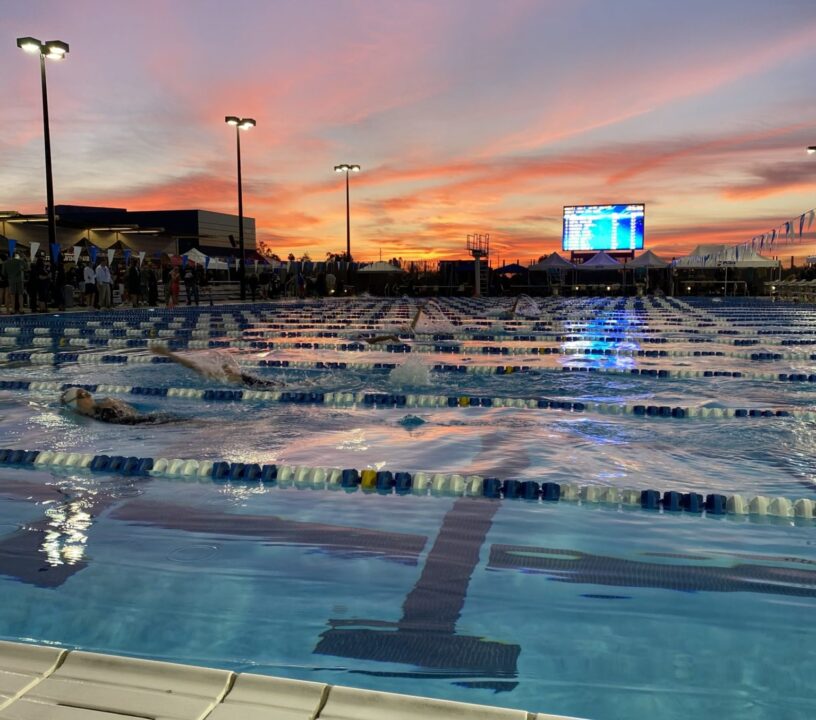 Alex McMahon of Aquawolves won the 200 IM and 50 free with lifetime bests of 1:49.33 and 20.24, respectively, with a few heats of 50 freestyles in between. Archive photo via Garrett McCaffrey, Phoenix Swim Club

The last day of racing at the Speedo Spring Sectionals witnessed double-wins from Arizona commit Alex McMahon of Aquawolves in the 200 IM and 50 free. Friday’s 1000 yard free champions, Kate Shanley and Peter Thompson, both dominated the mile on Sunday and Stanley went on to capture 2nd in the complete opposite of the event: the 50 free.

Michigan commit Kate Shanley of Foothills Swim Team took the women’s mile race by storm, finishing with a time of 16:22.76, more than 30 seconds ahead of the field. She dropped almost 2 seconds from her lifetime best from 2019 Winter Junior Nationals. Second-place-finisher Elizabeth Brock of the Colorado Stars also broke 17 minutes, touching the wall with a time of 16:55.21 and dropping about 12 seconds from her best time in December.

There was an especially close race for 3rd place; Jolie Kim of the University of Denver Hilltoppers ultimately touched the wall 3rd with a time of 17:33.50, less than one second ahead of 15-year-old Alexis Jacobsen from Foothills (17:34.12). This was a lifetime best for Jacobsen by 24 seconds and for Kim by about 30 seconds.

On the men’s side, Billings Aquatic Club’s Peter Thompson, a UVA commit, won the event with a time of 15:26.54, about 9 seconds off his personal best from 2018 Winter Junior Nationals. Evan VanBrocklin of Olympus Aquatics took 2nd place with a new lifetime best of 15:51.18, dropping 11 seconds from the time he posted in February.

There were major time drops for 3rd and 4th place where high school sophomore Colin Cosgrove of Tucson Ford Dealers Aquatics crushed his previous best from 2019 by 43 seconds for a time of 16:06.72. 15-year-old Jacob Baker from Mission Aurora Colorado Swimming chopped 57 seconds off his March 2020 previous best, finishing in 4th place with a time of 16:09.64.

14-year-old Gabbie Primiano of Life Time Arizona Swim Team won the women’s 200 IM handily, touching the wall 1st with a bt of 2:04.44 and taking 1.6 seconds off her previous best from 2 weeks ago. High school sophomore Colleen Macwilliams from Olympus Aquatics took 2nd place (2:06.57), within .12 of her lifetime best, while fellow 16-year-old Emma Amon of Yuma Aquatics placed 3rd (2:07.36). This was a best time for Amon by nearly 2 seconds. None of their previous best times were a month old yet.

14-year-old Amelia Brown of the Colorado Stars and Foothills’ Kate Shanley has a nail-bitingly tight race in the women’s 50 free where ultimately, Brown finished 1st with a time of 23.77, .19 ahead of Shanley who broke 24.00 for the first time. This was a new lifetime best for Brown too whose previous best stood at 23.86 from February 2020. Missoula Aquatic Club’s Addyson Lewis took 3rd place with a time of 24.15, .57 off her best time from last year.

With just a few heats of women’s 50 freestyles in between races, McMahon won the men’s 50 free with a time of 20.24, crushing his lifetime best from February by .45. He was challenged most closely by 2nd-place-finisher Bryce Ortanes of Aquawolves who touched the wall with a time of 20.35, shaving .03 off his best time from 2019 Winter Junior Nationals. In 3rd place was their teammate Nikolas Silolahti (20.76) who outswam his best time from 2019 by .16.