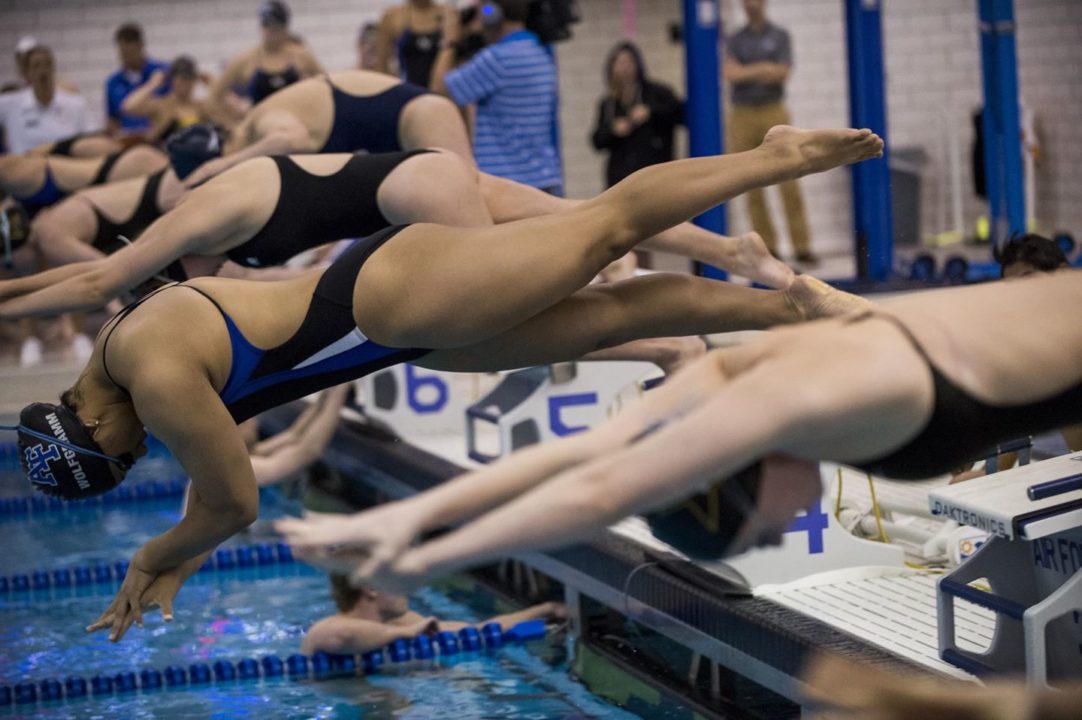 The Air Force Academy men and women defeated Incarnate Word in duals on both Friday and Saturday. Current photo via Josh Armstrong

Spencer Maher Commits to College of the Holy Cross

College of the Holy Cross has received a commitment from Spencer Maher. He will begin swimming fall 2020, and he will be joining the school’s class of 2024.

Backstroker Jake Riva has committed to swim for the United States Military Academy at West Point beginning in fall 2020.

USAFA, Colo. – The Air Force Academy men’s swimming and diving team controlled another dual win over the University of the Incarnate Word, winning 138-105, Saturday afternoon, Jan. 11, inside the Cadet Natatorium. AF won six of the 13 events contested, while having a top-three finisher in all 13.

The afternoon began with the 200 medley relay, and the squad of senior Cole McAnany, junior Brendan Richichi, and sophomores Aaron Pang and Matthew Lattin taking first. AF was also buoyed by four 1-2-3 finishes, the first of which was in the 200 free as sophomore Corey Shepard, junior Erik Orr, and Lattin took the top three spots, respectively.

Later in the 50 free, sophomore Andrew Limpert, McAnany, and sophomore Wyatt Boswell went 1-2-3. In the other freestyle event, the 100 free, Boswell, freshman Wen Zhang, and McAnany were the top three finishers. The final 1-2-3 placement came in the 100 breast, as Nelson, freshman Tory Bartlett, and senior Andrew Weiss were the top placers.

In the final swimming event of the day, the 200 free relay, Zhang, Boswell, Orr, and Shepard were the top placers for the Falcons, taking home the sixth gold of the day. Finally on the diving board, junior Cole Armagost once again paced the Falcons with a second place finish in both the 1 and 3-meter events.

The Falcons will return to the pool next weekend when they host WAC rival Seattle University in a two-day dual, Friday-Saturday, Jan. 17-18. Action from the Cadet Natatorium is set for a 5 p.m. start on Friday and an 11 a.m. start on Saturday.

USAFA, Colo. – The Air Force Academy women’s swimming and diving team defeated the University of the Incarnate Word in day two of dual action, 147.5-88.5, Saturday afternoon, Jan. 11, inside Cadet Natatorium. The Falcons won 10 of the 13 events contested, while having a top-two finisher in all but one.

“This weekend was a great one for our team,” Head Coach Colleen Murphy said. “We put goals in place for racing and competing, and they stepped up and carried out the plan. After training extremely hard in Coronado for 10 days and being at sea level, they came back to the altitude and preformed expectionally.”

Air Force got things started with a 200 medley relay win as the squad of junior Kylie Stronko, seniors Heidi Schellin and Esther Min, as well as sophomore Lia Campbell, took first. Members of that team who went on to get individual wins include Min in the 100 fly, Stronko in the 100 back, and Schellin in the 100 breast.

AF also had a trio of 1-2-3 finishes, as in the 1650 free, freshman Greer Johnson took gold, followed by senior Kelsey Linzmeyer and freshman Gabby Auerbach. Then in the other two freestyle events, senior Autumn Wolfgramm took first in both the 50 and 100 free. In the 50 free, she was followed by Campbell and Stronko, while in the 100 she was railed by sophomores Ally Carlin and Caroline Wittich.

In the final swimming event of the day, the 200 free relay, Wolfgramm led the winning team, along with Min, Campbell, and freshman Scarlet Friend.

Finally on the diving board, senior Kayla Wofford swept both the 1-meter and 3-meter events, and her score in both qualified her for the NCAA Zone E trials. She joins her teammate, freshman Gabby Peltier, who qualified for the 1-meter last night.

The Falcons will return to the pool next weekend when they host Seattle University and in-state rival Northern Colorado in a two-day dual, Friday-Saturday, Jan. 17-18. Action from the Cadet Natatorium is set for a 5 p.m. start on Friday and an 11 a.m. start on Saturday.

COLORADO SPRINGS, Colo. — Despite racking up major wins in different events, the University of the Incarnate Word men’s and women’s swimming and diving teams both fell to Air Force after Friday and Saturday’s dual meet sessions. The men fell, 125-95, on Friday and were also bested on Saturday (138-105). The women tallied scores of 128-89 and 147.50-88.50.

Kristen Straszacker topped the women’s 200 back, taking first in 2:06.64. Fernando Ruvalcaba Cruz also came out on top on the men’s side of the event, with a finals time of 1:52.33.

In the women’s 400 IM, Brenda Diaz won by a margin close to 10 seconds, notching a time of 4:38.77. Hector Ruvalcaba Cruz followed suit on the men’s side for the event, reaching through for a seven-second lead with a finals time of 4:07.99.

Christopher Lestage fought through the quick 50 free heats to place third in 21.71. He also earned third in the 100 free, sprinting to touch in 47.13.

Freshman Maya Knutson busted out a strong 2:15.06 finish in the women’s 200 fly to place second.

Straszacker went on earn runner-up in the women’s 100 back (57.36), while teammate Fernando Ruvalcaba Cruz came out on top for the men with a time of 51.97.

In the 1650 free distance event, Hannah Rowley was UIW’s top finisher for the women with a strong time of 18:36.08. Duran captured a first-place finish on the men’s side when he topped the competition in 16:33.29. Alvaro Ibarra finished in 16:58.16 for second place.

Sophie Taylor excelled in the women’s 100 fly to finish second with a finals time of 58.19.

The day’s competition day ended with the 200 free relays, where the men narrowly missed out on first place, landing as runners up with a time of 1:25.03. The women also placed second in 1:41.37.

UP NEXT
The Cardinals women travel up to Denton, TX to take on UNT on Jan. 17, while the men’s next time out is to face SMU on Jan. 18.