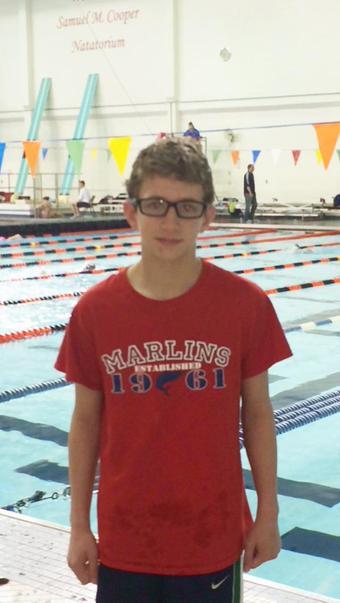 Adam McDonald of Cincinnati Marlins broke his second national age group record in as many days when he became the first 10-year-old boy in history to break the 1:07 barrier in the 100 breast at the 2015 Short Course Junior Olympic Championships hosted by Bowling Green Swim Club.

After crushing the NAG record in the 50 breast on Friday, McDonald came back the next day and promptly went after the 100.

McDonald came in seeded with 1:10.67 and dropped 2.68 seconds in prelims to set himself up for finals with 1:07.99. He then came back and whacked another second off his time to finish with 1:06.95 for the fastest time ever swum by a ten-year-old.

McDonald eclipsed Ethan Dang’s record from 2013, and it’s interesting to see how differently the two swam their races:

McDonald has had quite a championship meet, dropping gobs of time in every event he has swum. In addition to his two national age group records, he improved his times in the 50 fly by 1.92 seconds, the 200 free by 7.5 seconds, and the 200 IM by 4.7 seconds. McDonald will age up by the beginning of the summer but as a results of this weekend, he has established himself as one of the names to watch this summer.

Congrat’s to Adam! I thought Ethan Dang was going to be one of those “decade buster” swimmers whose records lasted for ages, but instead it looks like he’ll be getting some healthy competition from Adam McDonald. Keep up the good work boys!

Wow! I didn’t know Mr McDonald. What a weekend for him. 2 breaststroke NAG records! Congrats.

Cincinnati Marlins is used to producing amazing age group swimmers. I know that Carson Foster who broke in 2012 Michael Phelps’ LCM 10 and under 10 fly NAG record is also from that club. He has a fast brother too. Grant House who swam 1.35 in the 200 free last year at 15 is also from that club.
I went to their website to see the club records and there are a lot of famous names who swam there. That’s impressive! Mary T. Meagher/Stephanie Elkins/Joe Hudepohl/Nate Dusing/Kim Rhodenbaugh/Betsy Mitchell! 😯