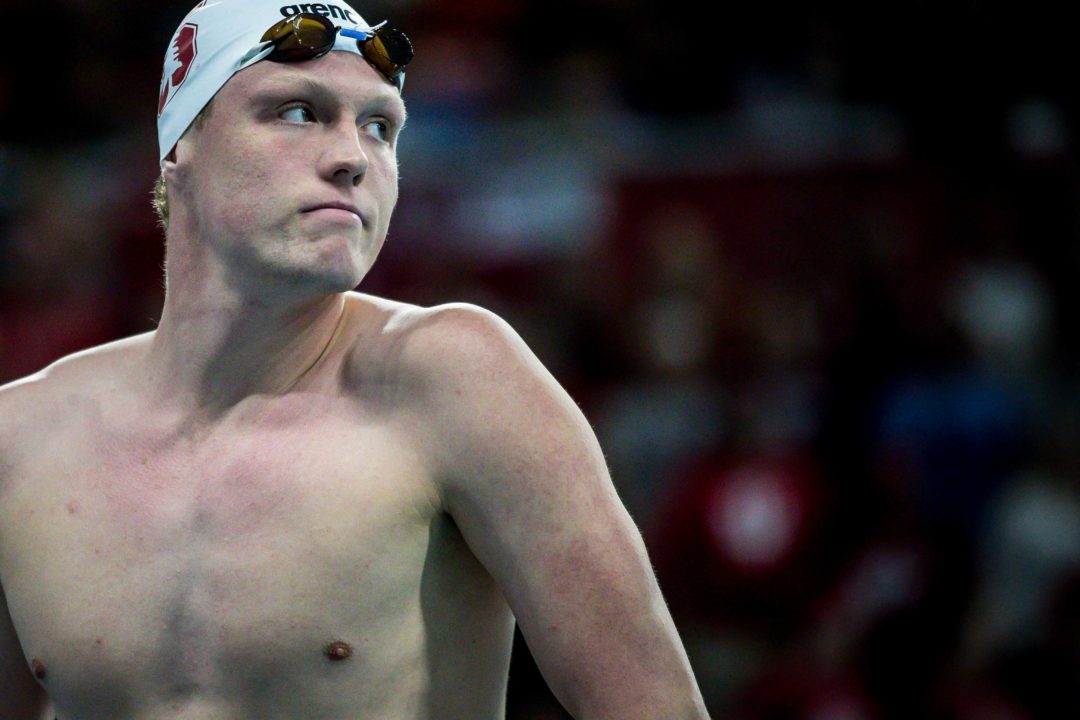 DeVine hinted at more specific mistreatment he says he faced as a member of the Stanford swim program, and referenced punishments by USA Swimming & Stanford. Archive photo via Jack Spitser/Spitser Photography

DeVine has taken to social media several times in the past few weeks to publicly criticize his alma mater Stanford. DeVine first posted alleging that he’d been “kicked off the Stanford team” because he is gay. The school said that DeVine, who had already finished his NCAA eligibility, was not invited to train with the Stanford program as a postgraduate, and head women’s and men’s team coaches Greg Meehan and Dan Schemmel said in a joint statement that the decision had nothing to do with his sexuality.

In the ensuing media discussion, DeVine admitted to Stanford’s school newspaper that he had violated Team USA rules by drinking while at a Team USA meet, rather than being present at the meet – that appears to be one of the “surface level reasons” DeVine had referenced for he wasn’t allowed to remain at Stanford. But DeVine has maintained his claims that he’s been systematically mistreated within the Stanford program because of his sexual orientation.

DeVine returned to social media on Wednesday with another long post and a series of Instagram stories laying out more specific allegations against the Stanford program. There’s still some confusion about which coaching staffs DeVine is referencing: he swam his collegiate years under Ted Knapp, who resigned last spring, but the men’s program is now headed by Schemmel, while the Stanford postgraduates (at this point, all women) appear to train under women’s head coach Meehan.

(Yes, this was a whole photo shoot smh) Reflection on the last week: First and foremost, I have some amazing friends and I can’t believe how lucky I am to have them. Never felt more grateful. To push my message forward, I am now working with Stanford Athletics. Before this issue leaves my page, there are a few things I want to address:

1. Why is it that so many gay people resonate with this message? Isn’t that alarming? And why are so many (mostly, but not entirely) straight people so quick to dismiss it? This is part of what I touched on when I said ‘denial of experience’. All around us gay kids are quitting their sports teams, they are committing suicide, and they are hiding their core identity from the world. We cannot deny that something is going on in a world where ‘being gay doesn’t matter.’
2. Homophobia is generally understood as an intentional and directed act. If that is your definition, I do not know how to engage you in any sort of meaningful conversation around this issue. I am not a dictionary. We all need to have a shared and elevated vocabulary in order to tackle complex problems. Homophobia is systematic. Period.
3. The ‘surface level reasons’ I was referring to involved me drinking and breaking the rules of Team USA. I never meant to deny this or cover this up. On the subject of a systematic discrimination, it is juvenile to focus the conversation on the ethics of a 22 year old getting drunk. A more apt focus might be on why the only gay kid on the team sees no value in the honor code. And, when there are many athletes breaking it every year, why am I the only one being punished by both USA Swimming and Stanford Swimming?
4. To any gay kids reading this, I am sorry. I have always tried to portray a positive image, one where I am included. In reality, I have struggled to justify my participation in swimming for the last two years. I hate to spread this message, but it is my reality. However, being gay is an overwhelmingly amazing experience. It has revealed to me a hidden and beautiful world, so much love, a diverse perspective, and has given me strength beyond what most people can see. Don’t let the bs stop you from being proud of who u r❤️

DeVine followed up with a series of Instagram stories:

Among the specific allegations:

We’ve reached out to DeVine, Stanford and USA Swimming about the allegations, but have not yet received responses, outside of Stanford’s previous statement from Meehan and Schemmel.

This rings true, and if it is, it’s so sad for this swimmer, and for the sport.

Who are the “two straight white males”? Inaccurate. Misinformed.

“it is juvenile to focus the conversation on the ethics of a 22 year old getting drunk. A more apt focus might be on why the only gay kid on the team sees no value in the honor code.”

I think it would be nice to see him admit guilt on that and not shift blame to someone else, or some systematic issue. There are clearly lots of issues to unpack for gay men in sports, but that doesn’t give you an excuse to break team rules

Abe, if you are reading this. Take responsibility for your actions.

he freaking admitted it, how many more times do you want him to?

I mean he’s saying since he’s gay, it’s okay for him to skip a finals session at the world champs to go out. If you feel that unwelcome because of your sexuality or any other reason, the onus is still on you to properly address that rather than skipping out on teammates to go out drinking.

65
-1
Reply
My Brother Was A Swimmah
Reply to  Sam

Dude: besides making strange, erroneous statements – and enabling the sh*t re: AD’s poor behavior and choices (I have read All your comments here not to mention similar whinings on other articles) – your comments are more vague than his

My comment above was in response to ‘Sam’; NOT to the posters right above me. This setup is kinda labyrinthine!

He’s trying to downplay his mistake by acting like it’s only an issue of having had a drink. He drank instead of supporting his teammates at a finals session..

He went drinking at WC and got punished. Can we now talk about the other issue he wanted to talk about in the first place – what he felt as being seen or treated differently being a gay swimmer?

No quite get why some seems to insist that because he did something wrong more recently at WC, that he can’t talk about how he felt for a long time before that.

If he started by saying he wanted to talk about being seen or treated differently as a gay swimmer, I think very very few people would have a real problem with that. But that’s not what he did. He said “I was kicked off the Stanford swim team… (because) I am gay.” And further, that “intelligently and masterfully designed homophobia” pushed him out. Pointing out that these statements were misleading at best is hardly ‘silencing’ him.

I don’t see anything specific, only red herrings. If nothing else, this young man has a promising future in politics. Only a politician could write so many things and not really be saying anything specific to the issue at hand.

Don’t be so naieve, he could have a great career in law as well

and a good Godzilla movie😄

There is no such thing as a good Godzilla movie. King of the Monsters was blah and meh

i was joking dude ….chill

All I see is a young man who desperately wants to believe that anything that happens to and around him is because people are homophobic, when the reality is, it is much more likely to be because he made poor choices. He is creating a narrative where there is no debating him, because you either agree with him or are anti-gay. Other than the FACT that he violated rules and drank and was disciplined, all I see here are vague and unsubstantiated allegations. And every single thing he says blames people’s not liking or respecting his sexuality – maybe the inconvenient truth is, these people he calls homophobic just didn’t like or respect… him.

I see concrete allegations here, maybe because I care about facts more than about my feelings about a subject?

Well I have two immediate responses to this, so pick your poison:

1. Wow, “Sam” just emailed me and “called (me) a fag, harrassed, publicly humiliated, outed without my consent…” etc

Facts because I say so!

2. Not sure what subject you are questioning my feelings about… (People hiding behind a label to avoid personal responsibility? People blaming others for their own poor choices? People’s choice of sexual partners?) but I can assure you the answer will not help your factless argument lol.,

where did you read that?

He said it himself… Did you read the article????

Pretty hard to entirely tell what’s going on here, but hopefully it leads to people making sure they aren’t discriminating against particular athletes

Don’t let this distract you from the fact that he showed up to a USA meeting at worlds drunk.

Facts to back up this claim?