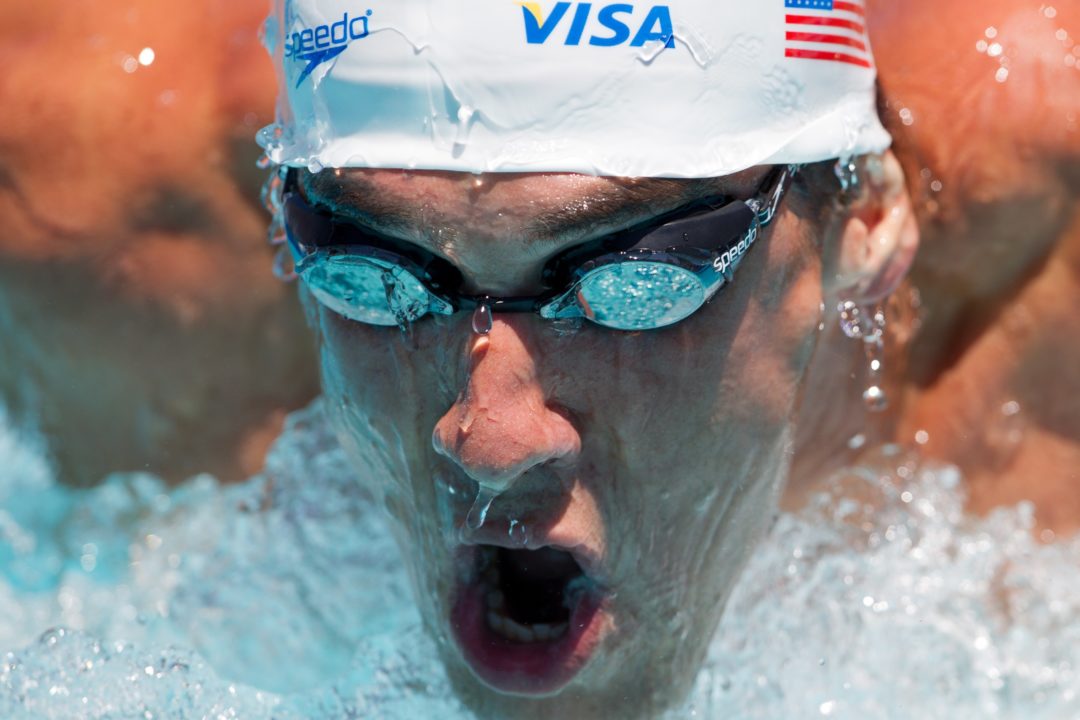 Michael Phelps has enjoyed an illustrious career spanning 12 (or more?) years of swimming at the highest level. During this time he became the first man to win double digit world titles and individual Olympic gold medals including the “double quadruple” and twice “three-peating.”

However for Mr. Phelps’ legacy, two years stand out even beyond the others. In years such as 2003, 2006 and 2009 Phelps was the best in the world. But starting in 2007 and continuing through Beijing 2008 Phelps was beyond simply the best. He was a special kind of dominant beyond the realm of “normal greatness.”

Almost 7 years ago now, on March 25, 2007, Phelps began his historic run with his performance at the 2007 World Championships. It was a week of superlatives. Phelps was the first man to win seven gold medals at a world championship, the first to take four individual titles and also the first to win five (remember his chance at eight medals here was derailed by a prelims DQ in the 400 medley relay). Four of those titles were in world record time, and impressive world records they were. Without exception, each of them was a truly incredible breakthrough. Records may be broken, but these have done well against the test of time. In the nearly seven years since there have been fewer than a dozen textile performances by others exceeding these records from only four people. The fact that one man swam all these times at the same meet is not just a testament to his ability to swim lightning fast. It shows Phelps’ ability to recover from swims, race against the best and put together a nearly perfect meet.

This was Phelps’ first individual of the meet and he began it with a bang. Looking to defend his title from 2005, Phelps did that and more. Phelps became the third man to go under 1:45 while simultaneously becoming the first ever under 1:44. He won the race by a World Champs record 2.42 seconds over Pieter van den Hoogenband. Seven years on, only Yannick Agnel has joined Phelps in the (textile) sub 1:44 club, and only a handful of people are even close to that group.

In many ways this was not just another event to add to Phelps’ schedule. It’s hard to imagine but if not for the 200 freestyle, Phelps might not be remembered in quite the same way. Perhaps he would be considered the most versatile, but he’d be thought of as more of a fly/IM swimmer and not an overall greatest. Of those in the top echelon of mens swimming, all of them won Olympic gold in the 200 free. Michael Gross. Ian Thorpe. Mark Spitz. Phelps broke Thorpe’s record and dominated the event by a record margin of victory. The 200 freestyle could be considered the event of All-Time Greats and in 2007 Phelps proved he had the mettle to be an all time great in that event.

Some have considered this Phelps’ best swim of the meet, or even his career. Quite nearly he almost dropped the WR under two major second barriers. As it stands he “settled” for taking 1.62 seconds off the world record. The race was won by a ridiculous 3.04 seconds. Looking at the broader scope of history, at that point Phelps was 2.5 seconds faster than anyone else had ever beenin the event.

This performance has stood the test of time better than any of Phelps’ other records. No one, in textile or otherwise, has swum a 200m butterfly faster than Michael Phelps did in that race. Seven years later, only Chad le Clos has joined Phelps in the 1:53 club Phelps almost skipped entirely. The fourth fastest textile performer ever is still a little over two seconds slower and only two people have joined Phelps in the 1:53/1:52 club. Truly a monumental swim.

Perhaps an overlooked swim in a week full of greatness, the 200 IM was still a dominant victory that would have otherwise been well remember if not for the Beamonesque performances in some of Phelps’ other events. Nine tenths of a second were cleaved from the world record. Phelps won this race by a little over a second, which seems pedestrian when considering he won in 2003 by over 3.5 seconds. It wasn’t. Though Lochte and Cseh (two of the greatest medley swimmers of our time) were between one and two seconds back, fourth place was a full four seconds behind. Since then, only five men have been within 2 seconds of that time in textile.

The only event Phelps did not set the WR was the 100 fly, an event where he is famous for winning by the smallest of margins. The past three world level competitions featured Phelps and Ian Crocker going head to head for first and second place. In 2003 Crocker denied Phelps his fourth world title of the meet, while in 2004 Phelps won the 100 fly by 0.04 despite Crocker having set the world record at the Olympic Trials.

It was a clash of Titans that left the rest of the world a second behind. Phelps won by 0.05 this time, earning his record-breaking fourth individual gold medal of the meet. It also made him the second fastest swimmer ever, and that swim ranks Phelps as the fastest textile swimmer in the 100 fly since 2006, excluduing himself.

Phelps’ final individual gold came my a margin of 3.52 seconds, setting a time that was just over two seconds faster than the world record and over 3 seconds faster than anyone else has been in history. Interesting, of all the records Phelps set in Melbourne, almost all of them have been beaten. He broke all of his own World and American records in Beijing, and his championship records were all beaten in 2009. The lone exception is this 400 IM performance.

While it no longer ranks as the fastest 400 IM ever, or the fastest in textile, even, many have pointed out that this race came at the end of a supremely tiring meet. Lochte broke the textile WR when it was at the beginning of the meet in London. In Shanghai, despite being faster than London in all of his other individual events, he did not beat Phelps’ CR in the 400 IM. It has been said that the truly impressive thing about the race was the timing of it at the end of the meet, after already swimming well over a dozen world-level races. To be able to dominate after having already won six other gold medals is the greatest tribute of Phelps’ ability to challenge the scope of what it possible.

Nice write-up. It’s scary to think how fast Phelps might’ve gone if he hadn’t swum so many events every time he was shaved and tapered.

Kind of funny how he won 7 in ’07 and 8 in ’08! Good article, and that 200 free was a wonderful demonstration of toying with your rival (Hoogenband) and then burning him on the final lap.

I remember really, really hating Ian Crocker after this meet. WHY U JUMP EARLY?!

But gah, that was…so long ago. Stop making me feel old.