Under Pressure: Do Swimmers Come Through in the Clutch? 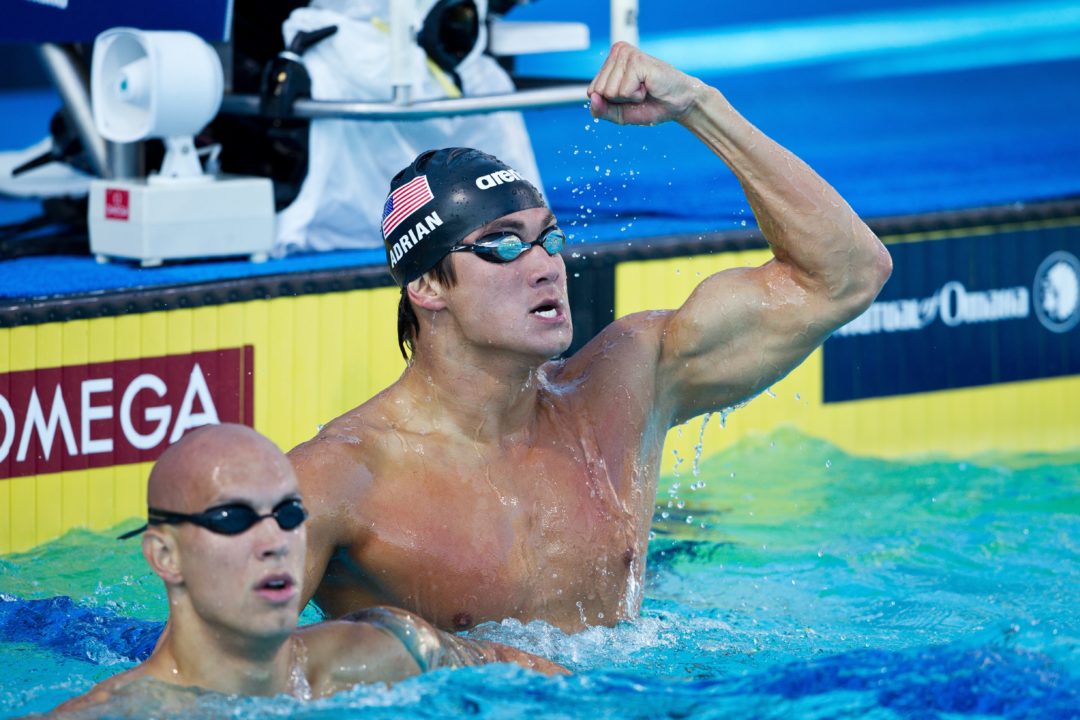 Are swimmers 'clutch' in the way that basketball players or football players are? Or should they always just be racing the clock? Archive photo via Tim Binning/TheSwimPictures.com

“Clutch” may be the most overused word in American sports. It is considered to be the mark of a true champion. Tom Brady has it. Michael Jordan has it. Tony Romo and LeBron James allegedly don’t have it.

Clutch is when an athlete performs best under the highest pressure situations, coming through better than ever against the most insurmountable odds. Babe Ruth in the World Series. Michael Jordan in the NBA Finals. Tom Brady in the NFL Playoffs.

Michael Phelps in the Olympic Games?

Is swimming a sport of tense-interpersonal competition and performance at the biggest stage? Or is it a one man struggle against hypothetical times on a scoreboard?

ARGUMENT 1: Swimming is a drag race for time. Any illusion of superior competitiveness, desire or clutch is merely a product of a swimmer’s time being faster than the people in the next lane over.

Unlike other sports, the competition in swimming is hypothetical. In basketball you can strategically foul a poor shooter to make him miss free throws. In baseball you can walk a dangerous hitter. In swimming, you cannot change your opponent. There is no strategy that can somehow make Tom Shields’ turns irrelevant or nullify Sun Yang’s closing speed.

If the person next to you swims 48.0 and you go 48.1, that person happened to be faster and it wasn’t a product of special strategy or racing beyond what get’s a person a 48.0. If the races had been done separately the same result should happen. The pool is the same, the other person can swim the same pacing and do the same strokes and still go a tenth faster. Physical attributes, medals, records and alleged mystical “clutch” don’t matter. The person next to you is a time to be beaten. All you can do is swim your own race and hope for the best. If you do your best and go 47.9 and the legendary “clutch” opponent goes 48.0, you win. If you go 48.1 then he won because his best happened to be a tenth faster than yours, not because he has the magic reach of angels in the last 5 meters.

But as swimming fans, we love to support this myth. “Caeleb Dressel can handle pressure!” No, he can swim a 48.9, which happens to be a very, very fast time. It takes no special confidence to race in a National final other than knowing he’s under 49 and the Olympian next to him is also under 49.

“Michael Phelps knows how to get there first!” No, he is the best swimmer in the world so he’s faster than the people next to him. His comebacks are because he’s a great back-half swimmer, not because of a special touch.

Often, what people attribute to being “clutch” is simply the product of a small sample size and human statistical biases.

For instance, many would say Nathan Adrian is a legendary under-pressure performer for winning the Olympic gold medal on the biggest stage, the Olympic Games, by the smallest of margins, 0.01. Of course he also finished 4th in the 50 free by 0.01 in 2011, the same meet where he went in as a major medal hopeful in the 100 free but added 2 tenths to his semis time and finished 6th. In 2013 he missed out on the silver medal by almost the same margin he won by the year before and failed a replicate a potentially medal-winning time from US Nationals in the 50 free.

Others would say that Michael Phelps is the greatest pressure swimmer ever. Really? He was somewhat lucky a few times in the Olympics. Sure he won the 100 fly three times by 0.05 or less. He also lost the 100 fly in 2003 by 0.12, the silver in the Athens 200 free by 0.07, The 200 IM in 2011 by 0.16, and the 200 fly in London by 0.05. Phelps might be a tremendously consistent performer at the highest level, but does he truly will himself ahead in close races? It would seem that when the difference is less than two tenths, his chances of winning come out to roughly random chance.

Pressure performances and legendary finishes are an illusion we create as followers in order to present our favorite swimmers as somehow special from the others. However there is no factual basis for believing one swimmer is clutcher than another.

ARGUMENT 2: Performing under pressure is vitally important to success at the highest level. The all-time greats manage to swim fastest under the most pressure-filled conditions.

In any given event in a year, the world top-10 list may be radically different from the placings at major meets, especially in the sprints. In 2013 final of the 50m butterfly, the bronze medal winning time was 23.11. There were nine people who swam faster than that time, either in prelims, semis or finals. But only three people equalled or matched 23.11 in the final, meaning that a whopping six potential medal winners underperformed when it counted. In the 50 freestyle, before the final three people had been under 21.50. The bronze-medal time was 21.51 but none of those three won a medal.

In fact this is a relatively frequent occurrence. In 100m races it’s somewhat common for people to add time from semis to finals, and not rare for someone to swim a medal-worthy time in prelims or semis but falter less than two days later. In fifties, it’s almost expected that on average one medal favorite will come through semis with a blazing time but will add time in the race that matters. If times from National Trials are included, often even swimmers in longer events do not perform their season best in the World or Olympic finals.

That consistency and ability to perform the best  in the most important times is what allowed them those sprinters to accumulate a combined 5 Olympic gold medals and 11 world titles.

Furthermore, there is some truth in the legend surrounding Michael Phelps. Phelps knows how to perform in a final. In all but only a few instances in over a decade has Phelps ever failed to improve upon a semi-finals time in the final, and indeed perhaps over 90% of his season bests in all years have come from the finals of major International meets, except of course where he got faster still after the global event.

Thus, the greatest swimmers have consistency, innate competitiveness and ability that lets them perform their best on the biggest stage while others often fail to live up to previous standards.

Really? Just going to ignore Jason Lezak? If that’s not definitive proof of one of the greatest swimmers of all time coming through in the clutch I don’t know what is.

That is SO true

imagine this situation you are anchoring a relay against Alain Bernard, you hope that your teammates can give you a lead. Then, you standing on the block and realize that your not going to get a lead and your going in with a .5 second disadvantage against the WORLD RECORD HOLDER! Your best time is a 48.0! an entire half a second slower than the guy next to you.

Hoo boy did I react negatively to this article. Swimming’s been largely devoid of silly semantic arguments, which is nice. Like, this all depends on how you define “clutch.”

And were these two arguments supposed to disagree with each other? It’s early, assuming that’s what’s going on.

Swimmers are definitely clutch. Other than Ian Thorpe, almost every Australian swimmer chokes under pressure.

I am American, but I don’t agree that every Australian chokes under pressure with the exception of Ian Thorpe. James Magnussen, for instance, had a great swim at the 2012 Olympics, he just got out touched. It happens. I thought it was sad to see how crushed he was by a silver medal, as if he were a failure for doing what almost no one else on earth could do.

Wait, what event was that? When magnussen got touched out?

The Aussies had a bad Olympics. so what. They learned from it. That doesn’t mean that suddenly EVERY Aussie swimmer chokes under pressure.

I maintain that Mack Horton could beat Sun Yang in Rio.