Michael Phelps May Be Ready to Race Very Soon 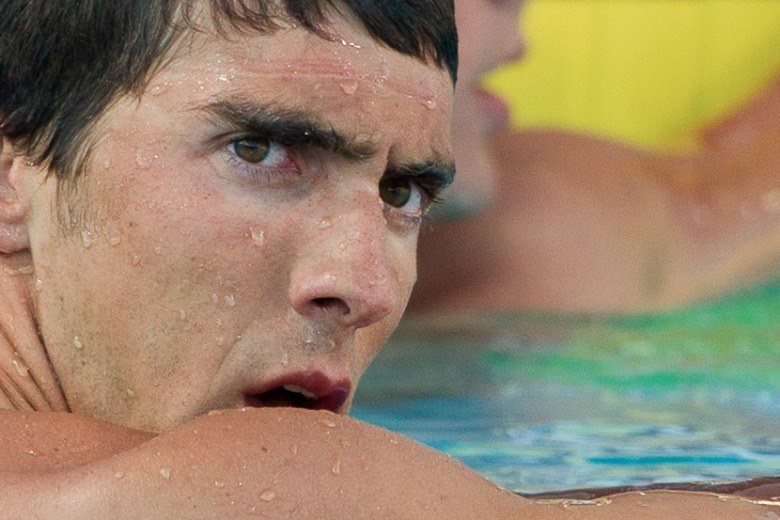 Michael Phelps, the greatest Olympian of all-time,  may be ready to race very soon according to a report released Tuesday...

Michael Phelps, the greatest Olympian of all-time,  may be ready to race very soon according to a report released Tuesday by USA Today.

Phelps is back in the pool about 5 days per week at NBAC, according to Bowman.  With North Baltimore’s present crew of elites, you know he’s getting great work done, but Bowman cautions that Phelps’ return to his competition, the first meet, will be to test his speed.

As we all know, Phelps hasn’t raced since the 2012 London Olympic Games, however, SwimSwam reported that he had returned to USADA’s drug testing pool last year. As of this month Phelps has been officially eligibility to compete.

“I think he feels pretty good about where he is,” Bowman told USA Today. “We’ll just kind of look around at some upcoming meets and maybe let him swim an event or two and see how it goes.”

Chatter behind-the-scenes has been that Phelps will race at the Mesa Grand Prix in April, but that cannot be confirmed, and Coach Bowman will surely keep that information quiet until he deems it ok to release.

The qualifying period for Mesa is up to 24 months prior to the entry deadline, so he’s home free on that one.

Right, but the qualifying period for Nationals started June 2013. So, a Grand Prix in April makes a lot of sense, especially if he wants to start with a reduced schedule and work his way up to some other events (200 IM, 200 free, etc.).

AND he’s got to have some competition again.

Whoah so he really may return to competition after all. 5 days a week is pretty serious, but would that be enough to reach his old level? I’d rather see him returning 100% dedicated or not at all, but then again it only matters what he wants to do.

In my opinion I don’t think he’s been truly out of the water. Maybe once a week or something he’s probably still done.

I think that’s what Bowman meant when he said it’s mainly just to test his speed. Sounds like they’re just trying to see if he’s anywhere in the ballpark of where he was before: they wanna know if he’s “still got it.”

I’m sure he does. I think they’re just overpreparing to avoid the some of the “he can’t do it” chatter (although there will inevitably be some).

…anyway I look at this, it’s good news.

5 days per week is perfect for him to get in shape and test speed. Also, Phelps is the master at being ready when the time is right, the Olympics. Frankly, everything is a test until then. Clearly, if this test goes as planned, he’s pacing himself for Rio.

I mean, he doesn’t know how good he is right now right?

He doesn’t know 100%, but he’s able to compare times he’s going in practice with times from past workouts and get an estimation.

I must admit, this is not at all what I expected. I honestly thought Phelps was done. He seemed to be enjoying life and freedom. Freedom from having to stare at that thick black vertical line on the bottom of the pool for hours a day.

I honestly don’t know why he would want to come back. He will never be in the kind of condition he was when he was in Beijing in 2008. I am at a total loss for words here. I don’t know what else he has to prove. Unless it will be purely for fun just to fool around with a few events that he didn’t normally compete in. Perhaps the 100 back, 200… Read more »

Because swimming was a huge part of his life and it’s something you can never truly leave behind! I think he misses the thrill of competition and didn’t realize how bored he would be without it. Once a swimmer, always a swimmer. He wants to swim.

He can still swim fast. He’s young. Also, there are other goals to reach. I maintain that Phelps would like to sprint, to focus on races 200 meters and down, ideally 100s. I could be wrong, but he’s been so fast in the 100 fly/back/free…. Also, I think it’s tough for him to watch Team USA lose relays when he knows his role on the relays could be the difference between silver and gold.

Is it weird that when I read your comments I do it in your voice? Would be great to hear you do live commentary for a meet.

Like all people, I’m a little off-put when I hear my own voice on video….but thank you.

BINGO!!!
I will always maintain that watching the USA men get DQ’d in Barcelona in 2013 really boiled his blood and helped MP to finally decide to come back.
That is my story and I am sticking to it

Plus what Mel said

I want to see a good, solid 100 back out of Phelps. He went 53.01 back in 2007 and was just .03 off of the WR at that point in time. He also qualified for the 200 back in 2004, but gave up the spot because of how crazy his schedule was. I can even remember an article where Bowman broke down his strokes (I think Times in 2006 or 2007) and said that he felt backstroke was his best stroke. That would be a true test for him too because of how crazy fast so many people all around the world are in the 100 back.

when he got silver in the 200 Fly in London. I had a feeling he would be back. That event was his baby. Plus many of the records he currently has/ personal bests came after swimming more than 10 races in the week prior… indicating that his potential at the time was higher… so even if he only hits 95% of the ability he had in 2008… given better racing situations in some of the events I think he can go best times again

You can mark my word

I am certain he will not do the 400 IM again. 200 fly still feels like a possibility. It was his first world record and one of the few (re: goggles filled with water) where he has said he felt that he could have gone faster

Any reasoning behind that? Michael Phelps will never again swim the 200 fly because… ASWIMFAN said so?

I used to swim the 200 fly. It was a pretty awesome feeling to blow past kids who thought they could beat me on the second 100. Statistically, I’d predict a 24-year-old LeClos to beat a 31-year-old in that race; but if my stroke was as smooth as Phelps’, I’d still love to PWN some butterflyers.

Probably because (1) he would be hard-pressed to beat LeClos, and (2) he cannot 4-peat in that event, after losing in London.

Put it this way, if you had a job that you devoted your life to and you enjoyed, if you stopped doing it after a hard run, would you feel that you missed it? Phelps is still young (kinda) and he has a chance to prove himself again and make is legacy greater.

I think Phelps is in a position to change the sport even more by setting an example for other aging olympians and college swimmers. One of the wonderful things about swimming is that it’s not all-or-nothing/pro-or-nothing like many other sports. I always think it’s a shame when the best swimmers stop swimming forever in their 20s. If you’re tired of swimming, that’s one thing. But no one who wants to swim should stay away for fear of not being able to match past performances. Evidently Phelps wants to compete. He’s probably prepared to do a fair amount of training; maybe not as much as before, but so what? If the amount of training he wants to do puts him in… Read more »

As I said and predicted even BEFORE Phelps announced his retirement:
Phelps would un-retire because he is most possibly the most competitive person on earth,

Good news to see Phelps back in potential action. He basically sat out right at a year…assuming that he really did sit out that whole time. A long time out, but not exactly a lifetime for someone still the top of their game in 2012.

It’s not like Phelps not swimming and living sedentary life for five years (eg. Thorpe who got so fat in the five years he retired) before making “a comeback”.
Phelps was still swimming every day last year, although not with the same intensity as he was in preparing for the Olympics.

I’m unsure as to how I feel about this. He was great for the sport, and he was a very special swimmer who brought enormous visibility to the sport. That benefited the tons of young swimmers who are now growing up and growing ever faster. Almost everything he’s done has been as a great ambassador and role model for the sport (ALMOST everything). Having him back would increase the visibility of the sport, again. I’m all for that, and I’m all for seeing the greatest in action.

A come-back almost certainly would provide tons of motivation for many swimmers. Now that they’ve seen the cracks in his armor (400 IM, 200 fly, etc), there would be lots of swimmers… Read more »

I really hope he doesn’t do the 200IM, and even 200free with the intention of going for an individual slot. He will be at his absolute best if he can focus on the 100fly and 100free (the events where he actually has something to prove), and pop a 145mid 200free for the relay.

I might be overly-optimistic for team USA, but with all the young up-and-comers i would bet he’d have to be faster than 1:45 mid to make the 2016 800 free relay

If he had lost the 100fly in London, I would argue that there’s no tangible achievement left for him to achieve that would warrant a return to the sport.