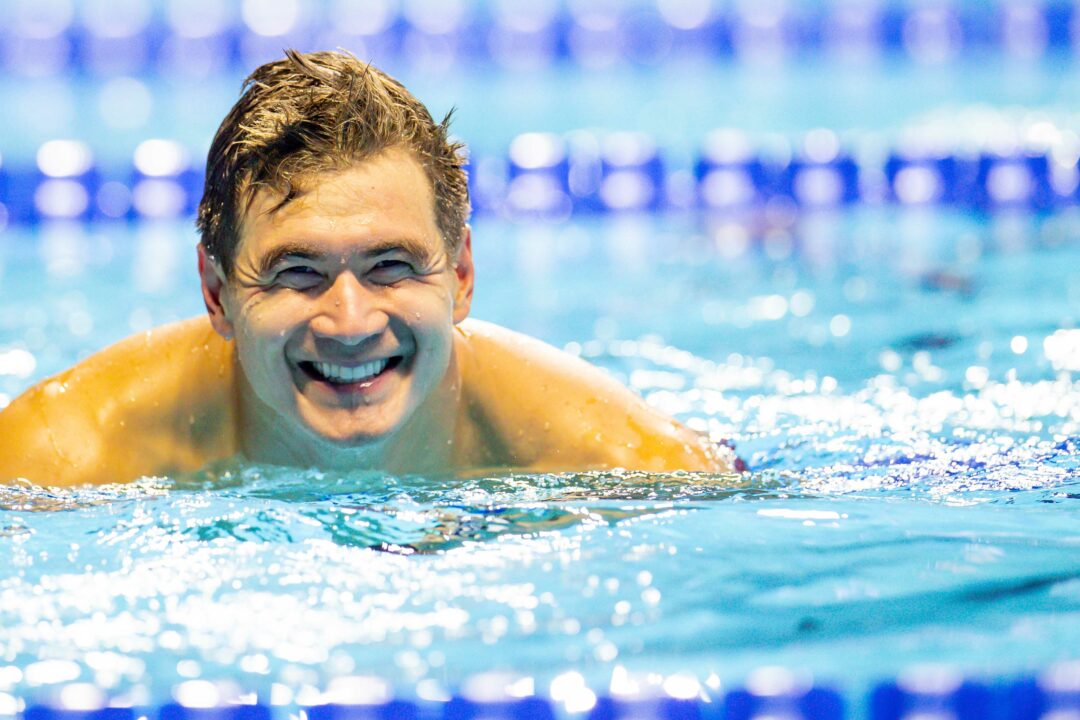 Olympic star Nathan Adrian isn’t ruling out a return to competitive swimming after narrowly missing out on his fourth Olympics at last year’s Trials. Current photo via Jack Spitser/Spitser Photography

During a Reddit AMA on Monday, eight-time Olympic medalist Nathan Adrian addressed his potential comeback, reflected on last year’s Olympic Trials disappointment, and came clean about peeing in the pool.

The 33-year-old isn’t ruling out a return to competitive swimming after narrowly missing out on his fourth Olympics with a third-place finish in the 50 free at last year’s Trials. “I still am in the pool 5x a week though and lifting plenty of weights,” Adrian wrote. “If I get the itch I might enter in a competition at some point!” For what it’s worth, the five-time Olympic gold medalist says he’s “adjusting wonderfully” to life after swimming as a co-owner of AC Swim Club in Petaluma, California. “It is remarkable how much you can get done when you aren’t training full time. However, I do miss it a lot!” When he was younger, Adrian mentioned that his typical week involved 14 hours in the pool and six hours in the weight room.

“More than anyone should,” Adrian responded when asked how often he pees in the pool. That wasn’t all he had to say on the topic as he was also asked how much pee he has swallowed over the years. “Not a ton. Chlorine usually disinfects it pretty quickly and then it goes airborne,” he wrote. “But how much have I inhaled? That’s another story.” Sounds like a question fit for his friends over at Mythbusters.

Adrian said it was an easy answer when asked what new Olympic event he’d invent. “I understand where the organizing committees were coming from when they added the men’s 800 and the women’s 1500 but for the excitement factor I think they should have added 200 Freestyle Relay and 200 Medley Relay,” he wrote. Also known as 4×50 free relays, 200 free relays exist at the NCAA level as well as some international meets, but not the Olympics.

Adrian brought home a gold medal from the 2012 Olympics in London, finishing the 100 free in a personal-best 47.52. He surged one-hundredth of a second ahead of Australian favorite James Magnussen to become the first American to win the event since Matt Biondi in 1988. Heading into the 100 free final, Adrian had only broken the 48-second mark twice – once in the prelims and once in the 100 free relay just days prior. Technically, he said that “the 100 free in London certainly comes to mind” when thinking about his greatest races before adding, “I have had some other really fun performances on relays too though!” The 6-foot-6 sprinter also earned Olympic gold medals by swimming the anchor free leg on the 4×100 medley relay in 2012 as well as in the 4×100 free relay and 4×100 medley relay from Rio in 2016 – the latter an Olympic-record 3:27.95 that he anchored with another free leg.

Last summer’s Olympic Trials was a disappointment for Adrian, who barely missed the cut for the first time in a decade. He ranked sixth of all heats after the 100 free prelims only to finish 13th in the semifinals, coming up short in the event where he won his lone individual Olympic gold in 2012. While it wasn’t the result Adrian envisioned, he left Omaha feeling hopeful about the future of America sprinters. “Younger American sprinters seeing/knowing that they will need to go a 48.low to have a chance at making a (100 free) relay will help to keep our sprint relays competitive internationally!” Indeed, the next generation keeps raising the bar. At last year’s Olympic Trials, the top six 100 free swimmers finished under 48.46 while the top six at World Championship Trials last month finished under 48.38.

A new dad of a 1-year-old daughter, Adrian emphasized the importance of using positive reinforcement and keeping swimming fun for kids. He says technique can be taught almost exclusively through games for years until more formal training should be introduced as early as 8 but also as late as 12 or 13 for prospective competitive swimmers. “I would treat a child’s athletic career like a fire,” Adrian wrote. “At first you want to coddle it and protect it to let it grow. Then, watch it and let it become its own thing and you do what you can to feed it.

“… Training can actually be fun. If young athletes are taught how to watch the clock and get their times for their sets, they can start to understand the idea that their hard work will pay off. Sets that were once impossible all the sudden are easy. Other athletes might just be motivated by showing off and racing/beating their friends. That is OK too as long as the coaches manage it appropriately.

“The only thing I would watch out for is making sure they are making the decision to play the sport. Give them the opportunity to say “no thanks” at the beginning of the season, however, if they do decide to partake then make sure they finish it out.”

Back in 2009, the Cal student made an appearance on the Discovery Channel series, Mythbusters. Adrian wasn’t a bonafide star yet, having won a gold medal in the 100 free relay from the Beijing Olympics the year prior without swimming in the final. He helped hosts Adam Savage and Jamie Hyneman test a theory that it’s possible to swim as fast in syrup as in water. Although Adrian’s test results were ultimately deemed invalid due to his expertise swimming in water compared to syrup, the experience was memorable.

“Mythbusters was exactly what it seems like on TV,” he wrote. “Adam was SO excitable and fun and constantly laughing. Jaime was… well Jaime. Super respectful and so intelligent/thoughtful. It was so cool!

“I have done a decent amount of interviews and TV stuff and it was cool to see that they are the exact same on camera as they are off. Not all people are like that.”

I respect him,but he’d be such a long, long shot to make the 2024 Olympic team.

Correct. The last thing the sport needs is another event catered to sprinters. I don’t think posters here realize — or perhaps they don’t care — that there is widespread animosity toward swimming on general Olympic sites, due to the perceived overflow of medal opportunities for anyone who excels at 50-200 meter distances, especially if they are from a relay rich nation. Whenever Phelps’ record comes up that’s the first thing you hear. The medley relay addition was tolerated because everyone understands that’s where the IOC was headed. But another token race to swim 50 meters and pick up another gold would be greeted with fury.

Should fine swimmers $5,000 everytime they pee in the pool

I pee in the pool every single time I swim. I have only known one college level swimmer that got out of the pool to pee.

Honestly he should go for the 50. Ervin, Hayden already proved that you can be fast in your mid 30s, and he’s the former American record holder

Somehow I already forgot how fast Hayden was in the 100. Excellent point.

No chance against Dressel and MA. They own that event since 2018.

Jacked Nathan has a chance. Esp if the 50 stays on the last day of the program, who knows what Dressel or MA’s week looks like prior.

After Dressel and MA, you have Brooks Curry, Held and young gun David Curtiss. All of them are young the slowest one is Curtiss at 21.87.

Sorry, but he won’t make it unless all of these swimmers get injured or something.

What you’re missing is that I would still like to see him at Trials even if he doesn’t make the team.

I also don’t think that will be the entirety of both their programs.

As of now, Nathan’s PB is faster than Andrew’s, and Ervin was going PBs at like 35 so who knows? Maybe he doesn’t have a chance, maybe he does

One the challenges for older swimmers who can throw down a world leading 100 free is having to do it 3 times at trials.

They could be an asset on the relay but can’t finish 4th to 6th (6th now?) after doing two swims prior.

Have been pushing for this FOREVER

Yes!! I personally think the 800 free relay is really boring and would so much rather see 200 free and 200 medley.

This man is a wonderful representative of U.S. Swimming! I was so sad when he didn’t qualify for Tokyo and I’ll be watching closely if he ever attempts a comeback. He was our Mr. Consistent Anchor Man for a long time, and I’m grateful for his dedication to our sport!