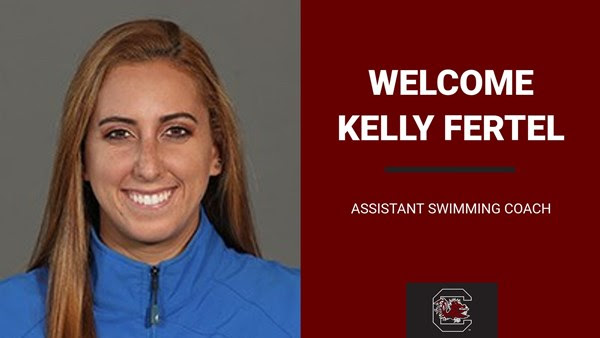 Fertel was a three time All-American at Florida under Jeff Poppell who has since moved to be the head coach at South Carolina. Current photo via South Carolina Athletics

South Carolina has announced the addition of Kelly Fertel as an assistant coach. Fertel swam at the University of Florida from 2016-2020 under Jeff Poppell. Poppell was the head coach of only the women’s team at Florida at the time but is now the head coach of both the men’s and women’s programs at South Carolina.

“I’m extremely excited to have Kelly join our staff at South Carolina. As a former All-American at Florida, she experienced success at the highest levels of both the SEC and NCAA and was a major factor in the Florida women’s team rise from the bottom half of the Southeastern Conference to three consecutive SEC Runner-Up finishes and a #1 National Dual Meet Ranking in 2019”, Poppel said of Kelly.

“As anyone that knows Kelly will tell you, she has a big personality with a lot of positive energy that I think will serve our team well. I see Kelly embracing the opportunity of being a relatable resource for both the men and women in our program as they seek to successfully navigate and balance the high achieving demands of today’s college student-athlete.”

In her time as an athlete, Fertel was a three-time NCAA All-American. She also qualified for the NCAA Championships in all four of her years spent as a Gator. She is fourth all-time in school history for Florida in both the 200 and 400 IMs. She graduated in 2020 with a degree in telecommunications. In 2017, she represented Team USA at the Maccabiah Games where she came home with five gold and two silver medals.

While at Florida she also earned the Giovanni Linscheer Award twice. The award is given each year to the female who contributed most to the overall success of the team. She also earned the Tracy Caulkins Award as a freshman which is awarded to the female freshman who exemplifies the competitive spirit of the award’s namesake and demonstrates dedication, tenacity, and a great will to win. Fertel served as a team captain and was the chair of the Florida Student-Athlete Advisory Committee (SAAC).

After her time at Florida, she swam for the ISL’s Cali Condors for a year. More recently, she has spent time as an assistant coach for a Swim America Gainesville, a USA Swimming club team in Gainesville. During that time she pursued a master’s degree in health education and behavior from Florida.

Kelly joins a South Carolina team that will be in their second season under Poppell. She fills the role previously held by Jeana Kempe who has been announced as the new head coach of Illinois.

I’m surprised there aren’t more comments on this one

I mean any time someone gets hired power 5 with little to no experience I’m always interested. Would love that secret recipe

Welcome Kelly! Excited to have you join UofSC! #climbtheladder

Gio’s uncle with the same name (Giovanni Linscheer) went to UF and is a gator great.