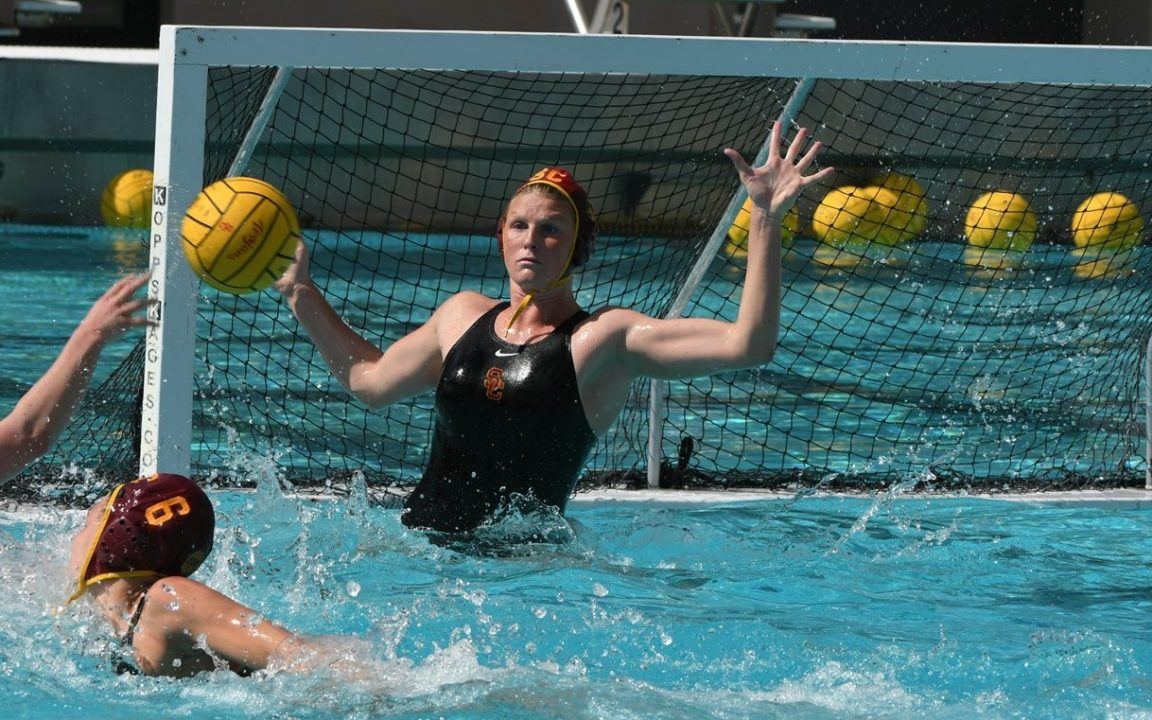 With the 2019 NCAA women’s water polo season set to begin later this week, SwimSwam takes a look at the returning award winners who could be key factors in 2019. Sixty-six of the 113 All-Americans across Divisions I, II and III remain. Archive photo via USC Athletics

With the 2019 NCAA women’s water polo season set to begin later this week, it’s time to take a look at players who could be key factors in 2019. 66 of the 113 All-Americans across Divisions I, II and III return for the new season, including 4 for the defending national champions USC.

Twenty-nine of the 58 2018 Division I All-Americans are back in the pool aiming to repeat their efforts and push their teams closer to a national title, while 16 of the 22 Division II and 21 of 33 Division III All-America selections also return.

All of those players will be aiming to earn one of 10 available team berths at the National Collegiate Women’s Water Polo Championship at Avery Aquatic Center in Palo Alto, California, on May 10-12.

Twenty-six All-Americans return from the 10 2018 championship teams, with UC San Diego and USC each boasting four on their respective rosters.

Sixteen Division I schools bring back at least one 2018 Association of Collegiate Water Polo coaches (ACWPC) All-America selection, with USC leading the way with four honorees and Stanford, Cal and UCLA each featuring three.

Longan finished 2018 with 214 saves (11.03 per game) to go with a 5.24 goals against average. Hauschild put in 68 goals, the most ever for a USC true freshman, Megens notched 2.2 goals per game in 17 appearances after missing 10 games due to injury early in the season and Mammolito produced 43 goals for the Trojans in 2018, including three scores in the NCAA title match win over Stanford.

The 2018 NCAA runnerup Stanford Cardinal boast three returning All-Americans in Makenzie Fischer (1st team), Aria Fischer (2nd team) and Kat Klass (3rd team). Makenzie Fischer earned her second All-America nod after leading the MPSF with a 2.79 goals per game (67 total), including 19 multi-score games. Aria Fischer added 1.46 goals per game in MPSF play as a rookie, while two-time All-American Klass (also second team in 2016) is back for her senior season after adding 39 goals her junior year (1.63 per game in MPSF action).

UCLA returns three All-Americans in 2019. Junior Maddie Musselman put in 1.83 goals per game (53 total) to go with 32 assists, 41 steals and 11 field blocks in 29 games en route to first team accolades to follow up her 2017 MPSF Newcomer of the Year season. Bronte Halligan added a team-best 37 assists and 58 steals while scoring 31 goals (1.00 per game) en route to third team honors, while Carlee Kapana garnered honorable mention acclaim for her 180 saves (9.21 per game) and 6.14 goals against average.

Three honorable mention honorees are back on the Cal Bears roster: Madison Tagg, Emma Wright and Kitty Lynn Joustra. Tagg returns for her senior season after making 166 saves and owning a 5.20 goals against average. Wright scored a team-high 47 goals (1.81 per game), while Joustra added 33 (1.43 per game).

Arizona State, Loyola Marymount, Michigan and Pacific each return two All-Americans, while eight other teams include one selection on their rosters.

Azusa Pacific and Cal State East Bay each return two All-Americans, while five other schools bring back one honoree. East Bay’s Auriel Bill is back after earning Division II Player of the Year nods from the ACWPC in 2018.

Cal Lutheran, LaVerne and the Redlands boast two returning selections, while seven other schools feature one honoree on their 2019 rosters.