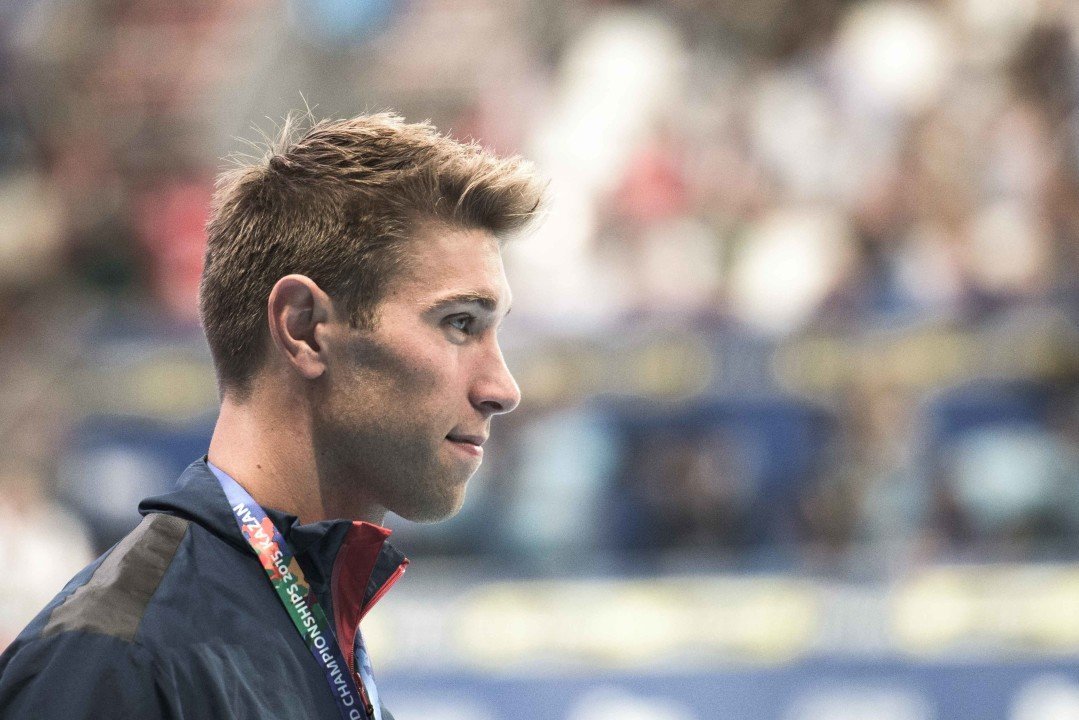 Matt Grevers earned 'Male Swimmer of the Meet' at the 2015 Duel in the Pool, primarily due to his new World Record-setting 100m backstroke on Day 2 of the event. Archive photo via Mike Lewis/Ola Vista Photography

The 2015 Duel in the Pool brought an extremely talented line-up of European All Star swimmers to take on the American squad at the storied IUPUI Natatorium in Indianapolis, Indiana.  When it was all said and done, America came out on top once again, winning the meet for its 7th consecutive time.  Below is a summary of the 5 important lessons we learned on day 2, as the 2015 edition concluded in stunning fashion.

#2 Grevers Gets It Done

Olympic gold medalist Matt Grevers made a major statement on day 2 of the Duel to double up on his monstrous day 1 200 back win and 100 back relay lead-off American Record.  Setting the SCM 100 back World Record was his goal with the gentle giant stepping up and making it happen.  Grevers clocked a huge effort of 48.92 to take the win and surpass the old mark of 48.94 held by American Nick Thoman since 2009. Said Grevers of his determined performance, “I felt really good yesterday leading off the relay … I thought there would be a chance and luckily everything went really well.”

Grevers was named ‘Male Athlete of the Meet’ for his performances. With the big swims from the big man, Grevers sent some subtle signs to Aussie powerhouse backstroker Mitch Larkin, the double World Champion in LCM, that Rio gold is certainly anything but secure for any one swimmer.

2012 double Olympic sprint freestyle gold medalist Ranomi Kromowidjojo from the Netherlands had a somewhat disappointing 100 freestyle race from day 1, where she wound up in 3rd behind Americans Simone Manuel and Lia Neal. Kromowidjojo led at the 50 of that race, splitting 24.96, but faded in the final 25m of the race and ultimately clocked a time of 52.28. Still a solid time, but the Dutch sprinting siren has clocked more than a dozen sub-52 short course 100m freestyles over the course of her career, and the swimmer looked clearly disappointed at the finish.

Flashforward to the 2nd day of the meet and it was a renewed mindset for Kromowidjojo as she smashed a 50m freestyle of 23.24 for the win. In doing so, the 25-year-old equaled her own World Record mark, which she set in Eindhoven in 2013. Kromowidjojo attacked the race from the get-go, taking it out hard in front and not relinquishing her lead as she slapped her hand on the wall.  The Dutch star followed that up with a scorching 51.15 split as part of Europe’s 400m freestyle relay, the swiftest split of the entire field. For her day 2 throw-down, Kromowidjojo was named ‘Female Athlete of the Meet’.

With Italian World Record Holder, Gregorio Paltrinieri in the men’s 1500m freestyle field, the pressure was on, as Americans Michael McBroom and Connor Jaeger took to the pool in day 2’s first event. Paltrinieri had just rocked a 14:08.06 at the European Short Course Championships to wipe the oldest SCM record off the books, but Jaeger took it in stride and was side-by-side with the Italian the entire race.

With about 250m left in the race, Jaeger began to make his move, making up ground on the small lead Paltrinieri had, until they flipped almost simultaneously at the 150m mark and Jaeger hit another gear. With the crowd behind him, Jaeger powered his way through the remaining few laps, simply displaying his will to win the race. He made it happen in the form of absolutely crushing a new American and U.S. Open record of 14:19.29, surpassing the oldest American record on the books. Paltrinieri touched in 14:20.24.

Conor Dwyer also threw down an impressive demonstration of speed and grace in the men’s 200m freestyle contest.  The reigning World Champion in the LCM version of the event, Great Britain’s James Guy, was just one of the competitors ready to blow away the field, along with Dwyer’s American teammate Ryan Lochte. But Dwyer held his own the entire race, controlling his pace and carrying out a masterful strategy resulting in splits of 49.78/52.32 to crank out a final time of 1:42.10. That time knocked out Ricky Berens’ U.S. Open Record set in 2011.

Crowd favorite Missy Franklin faced Hungarian foe Katinka Hosszu across multiple events, but the American was able to successfully conquer the #IronLady in the women’s 200m freestyle race on day 2. Franklin was 2nd after the opening 50, splitting 26.54 to Hosszu’s 26.41, but the American turned it on to surge out in front and lay down a 54.98 time for the first 100. Hosszu clipped at Franklin’s heels the remainder of the race, but Franklin held on for the win in a final time of 1:52.74, just .05 of a second ahead of the Hungarian.

With her result, Franklin registered a new American Record.  Her time blew away her previous personal best of 1:53.19, which was ironically set at her first Duel in the Pool in 2011, where she competed for the U.S. at just 16 years old.

#6 Despite the many strong women’s performances, the US women lost the women’s meet, 63-68, on the final relay, and had to rely on the men’s lopsided 92-39 to win the overall meet. Surprisingly Hozzsu accounted for “only” 18 of the European women’s 68 points as she was shut out in the medley relay and the 100 back.

It is truly astounding to me how fast Missy goes given that her underwater are so subpar compared to her competitors’.