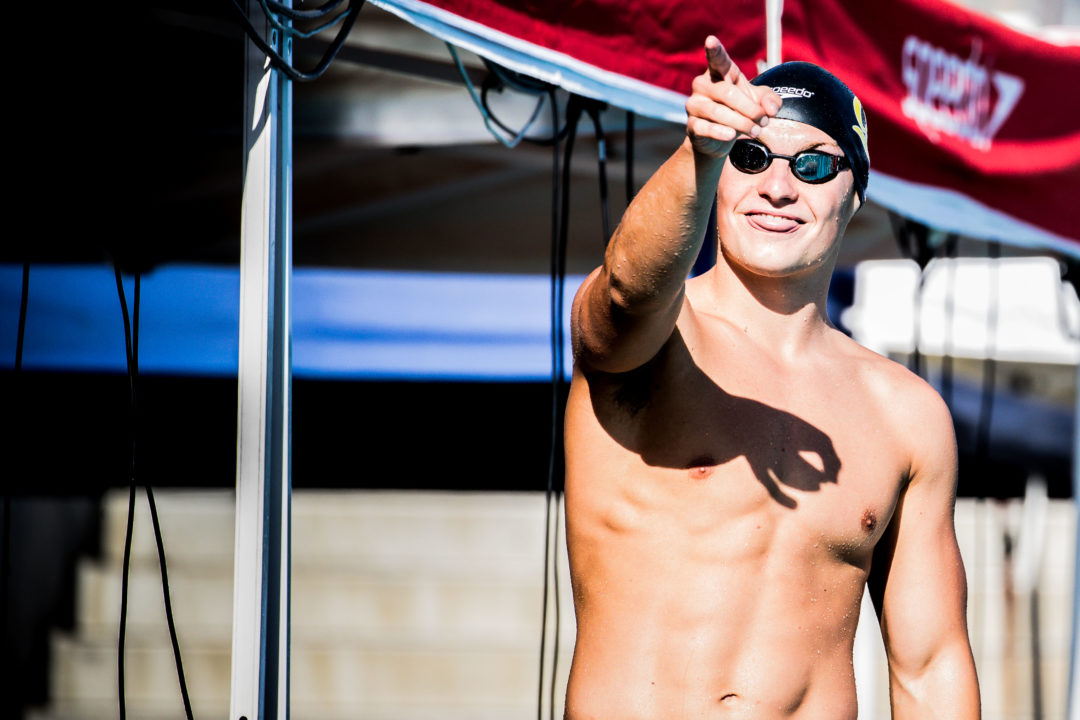 A high caliber of competitors will be back in action this week at the 2021 Pro Swim Series stop #3 in Mission Viejo, California. Current photo via Jack Spitser/Spitser Photography

Much like we saw in the run-up to the 2008 US Olympic Trials, USA Swimming will employ evening prelims and morning finals sessions at the Pro Swim Series stop in Mission Viejo this weekend.

How athletes approach this format will be telling. Top tier swimmers have a bad habit of not working too hard in preliminary rounds at these Pro Swim meets – but if they do that here, have they lost some of the value of the reverse-schedule practice?

At Hungarian Nationals, we saw some swimmers (like Kristof Milak) talk about how they didn’t feel great in ‘early session’ morning swims, but settled in by a second morning race. The 10AM start time isn’t that early in Mission Viejo, though, and for swimmers coming from other time zones, their ‘body clocks’ might perceive that as more like noon or 1PM anyway.

As a result of the lack of 1:46 swims this season, the Americans have yet to crack the top 10 world rankings in the event as Seliskar’s fastest time in the current 11th ranked swim worldwide. The men’s 200 freestyle in Tokyo is shaping up to be a bloodbath that might require a 1:46 low or even a 1:45 to get into the final. The reason for that possibility is that so far this season, 8 swimmers have already been under 1:46 in the event. Leading the rankings is Japan’s Katsuhiro Matsumoto who posted a 1:44.65 national record at the Japanese Olympic Trials.

The worldwide momentum in the 200 freestyle leaves us wondering if we’ll see anyone rise to the 1:45 occasion this week in Mission Viejo. Top-seeded Andrew Seliskar is entered with a 1:45.71 while Dean Farris and Zach Apple represent the only 1:46 entries and 1:46.45 and 1:46.76, respectively.

As we recently outlined when the psych sheets for this meet were released, the women’s 100 breast is likely the event that will be the most like what we’ll see at the 2021 US Olympic Trials. Specifically, the top 8 entrants in the event include:

With Lilly King on track to repeat as the top-qualifying US Olympian in the event, the race between the other 7 in the field will be a preview for when they swim the event in Omaha this June. The 8 entrants in the 100 breast in Mission Viejo are almost all present in the country’s top 8 performers in the event thus far in the US Olympic Trials qualification period:

Lilly King set the world record in the event back in 2017 with a 1:04.13 and will not only the one to beat in Mission Viejo, but will be the one to beat at Trials, and likely at the Tokyo Olympics. Her current season of best of 1:05.32 came from her recent performance at the Speedo Sections in Indiana where she out-swam Annie Lazor with a 1:06.86.

The unique thing about this particular breaststroke field is that in addition to King, the top 8 entrants here are collectively rather well experienced on the major international level. Annie Lazor swam the 100 breast at 2019 Pan Ams, picking up gold there while Kaitlyn Dobler won silver in the event at the 2019 World Junior Swimming Championships. Going beyond the 100, Molly Hannis raced the 200 breast in Rio and placed 16th in the semis while Emily Escobedo won silver in the 200 at the 2019 World University Games.

While it’s likely not everyone will be tapered in Mission Viejo, the world-class caliber of athletes in the women’s 100 breast is sure to make it a race to watch.

The men’s 200 butterfly in Mission Viejo will feature an interesting matchup including a 2016 Olympian, a 2019 finalist, and the 2021 NCAA gold and silver medalists in the event.

Zach Harting swam the event for the United States at the 2019 World Championships in Gwangju and wound up placing sixth in the final with a 1:55.69. Harting also swam the event a year before at the 2018 Pan Pacific Championships and collected a bronze medal with his swim of 1:55.05 which stands as his current PB. He’s entered in Mission Viejo with a 1:55.26 representing the top seed and only sub-1:56 entry.

Behind Harting in the event will be the top 2 finishers at the recent 2021 Men’s NCAA Swimming Championships Nicolas Albiero and Trenton Julian. While the event was short course yards at NCAAs, Albiero and Julian have solid entry time in the long course version of the event with a 1:56.05 and 1:56.09, respectively which are both of best times for them, each hailing from the 2019 US Championships.

With only a few weeks separating NCAAs and the Pro Swim Series, it will be exciting to see how they shape up in a long course pool.

Adding to the fun, Tom Sheilds is entered in 4th place with a 1:56.12. Shields swam the event for the US at the 2016 Olympics and placed 20th with a 1:56.93 and since then his fastest swim in the event was a 1:55.25 in July 2018. Shields has been around the major international scene for a decade now, representing the United States for the first time in 2011 at the Summer Universiade in Shenzen.

While the likes of Luca Urlando, Gunnar Bentz, Jay Litherland, Jack Conger, among others will join the field for Trials this summer, the Harting/Albiero/Julian/Shield/Kalisz matchup will be an interesting glimpse into where the 200 fly stands so far this year.

5. Will Ledecky Be Faster, Slower, Or The Same?

It’s been just over a month since Katie Ledecky made her return to the long course pool following her year-long, coronavirus-caused hiatus. She made her comeback at the San Antonio stop of the 2021 Pro Swim Series. There, Ledecky won the 1500 freestyle with a 15:42.92, trailing her current world record in the event on 15:20.48 by 22 seconds.

Despite being off her best, that time for Ledecky means that she’s currently the top-ranked swimmer in the event in the world. The next fastest swimmer is China’s Wang Jianjiahe who was a 15:45.59 in September 2020 and Russia’s Anastasiia Kirpichnikova with a 15:53.18 in December.

The 1500 free is an interesting event this year on the women’s side because it will be featured at the Olympic Games for the first time ever. Ledecky has a chance is currently prepping to collect the first-ever gold medal in the event but will have to hold off the likes of Jianjiahe, Kirpichnikova, and defending world champion Sarah Köhler.

One comparison that we can look at to see where Ledecky was at this stage in the lead-up to Rio 2016 is that in March 2016, she swam an 8:13.64 800 freestyle which was nearly 10 seconds off what she swam at the Olympics that summer when she won gold with a world-record-setting 8:04.79. From that, we can see that Ledecky won’t be too concerned if she’s still a bit off her best time in the event.

Considering that she won’t even need to be at her best in order to make the US Olympic team, it seems unlikely that she’ll be going all out this weekend. Considering that we’ve only seen one 1500 free from Ledecky in the last year, however, it will be interesting to see if another month of training has worn her down a bit more producing a bit of a slower time, if she has the momentum right now to maybe push a sub 15:40 swim, or if she’ll be around the same.

Is Germany going to let Friese and Wich-Glasen use this meet for Olympic qualifying?

I think so, its my understanding that to qualify for Germany you can swim at any approved meet between 1-18 April or something like that timeframe.

Chadwick’s a dad!! why aren’t we droooooling over that???