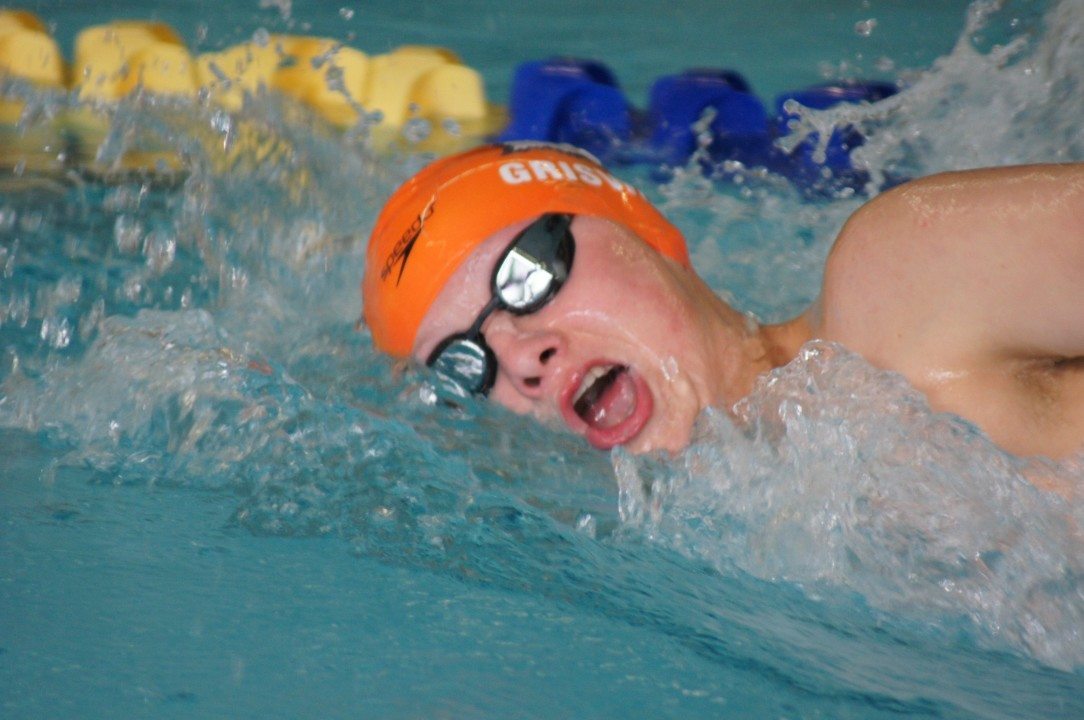 American Robert Griswold broke the World Record in the 200 back - an event that he hasn't swum competitively in 2 years. Archive photo via Daniel McCord/C-N Swim

In a bombastic display, swimmers from across the world broke World Records in almost every class.

That included Italy’s Carlotta Gilli, who broke the World Record in the 200 IM in class SM13 with a 2:23.62 on Sunday. On the same day, she broke the record in the 50 fly with a 27.98 – finishing 2nd to Great Britain’s Eleanor Robinson in the multi-class scoring system.

The opening day of the meet had 12 World Records alone. In the men’s 200 backstroke, the top four finishers each broke records in their respective classes. That includes American Robert Griswold, who won the race. He swam 2:17.77 to clear the old S8 record of 2:22.04 set in 2015.

“I am really proud of my race. I have not swum in two years competitively, but I knew I had a lot in me. It is great to be here in Berlin,” said Griswold.

Other records in that event:

American Aspen Shelton finished 4th in the women’s 200 backstroke, and her 2:30.69 was good enough for an S13 World Record.

Berlin was the final stop of the inaugural Para-Swimming World Series, and Brazil’s Daniel Dias and Italy’s Monica Boggioni have been declared the series’ overall champion.

Dias – Brazil’s most decorated Paralympian – finished top of the men´s rankings with 2,034 points which he gained at the fourth World Series meeting in Indianapolis, USA. Chile´s Alberto Abarza’s best performance came at the second World Series in Sao Paulo, Brazil, when he earned 2,032 points. The Netherlands´ Marc Evers (1,998) completed the top-three.

The Brits, buoyed by their record-setting performance in Berlin, won the overall national federation awards.

Oliver van de Voort is a leg amputee, 2:06 200 back is VERY impressive

This meet lines up well for the swimmer to taper and then peak again at worlds in 10-11 weeks so it makes sense that there was a lot of fast swimming. What I want to know is why they chose mexico city for world championships at altitude over 7000 ft and then its held so late in the season. I am wondering how many swimmers they will actually get at that meet, the Berlin meet may end up being the largest meet of the year. China, Russia(suspended) and Ukraine didnt send one swimmer to any of the 5 world cup meets and they have no swimmers on the 2017 world rankings because they havent participated in an IPC sanctioned meet.… Read more »

What’s wrong with altitude? Are international games only for sea level now?

As for timing, that I can’t répond but I am curious as well. In Canada most of our parathletes that are participating are university age and deferred a semester or just did online courses.

I know a few para athletes that arn’t allowed to go to altitude due to medical conditions/disability. Sad some may miss out due to this.

I am looking forward to the IPC awarding Australian Lakeisha Patterson with her Female Junior Swimmer of the World Series award. Absolutely staggering that they continue to support her blatant cheating. Simply informing her to stop claiming that she suffers from Parkinson’s apparently is as far as they went. This will be a first for them though – presenting a Para award to an athlete they know to be able bodied and who has committed IM three times between 2014 and 2017. Pathetic and absolutely rotten to the core. 40 World Records is exceptionally high and I doubt that swimmers would have tapered fully for this type of meet, they would still be in a block of hard training. Of… Read more »

I finally have to agree with you on something there Shonda. It is a known fact around many countries that Lakisha Patterson has been “slipping” information in relation to her team mates to other parties before it is released but she is not the only one either. Information about classifications down to personal information as well. What a team mate!!!! The downside is, the other athletes that she has sent it to are not prepared to come forward and show evidence because they are worried about their position on their home team. It would be interesting to see what Swimming Australia are doing about this if at all anything. Probably nothing I would say. Let’s watch this space and see… Read more »

People are not going to keep quiet forever Sarah.
The pressure is mounting and ultimately she will be busted.
It will only take one coming forward and the floodgates will open.
Wouldn’t look good for Swimming Australia if half the team are excluded for telling the truth.

Interesting. Let’s see what Swimming Australia do then. Surely one cannot lie about having such a serious illness as Parkinson’s and not face any disciplinary action within ones sport. In my book that constitutes bringing Swimming into disrepute.
That’s a lovely culture they have going if swimmers are too frightened to come forward, That is nothing to be proud of. Culture needs to be addressed from the top down and these swimmers should be offered anominity. It’s all turning out to be quite the scandal for Swimming Australia actually. Management are obviously complicit with the ongoing fraud/IM & bullying swimmers into silence within their swim team. Someone has to take responsibility.

This is very true ! And agree with everything you are saying

I find it interesting that all the aussies classified in Indianapolis are up for review next year.

Paige Leonhardt, another Australian lying about Cerebral Palsy, has been classified in 2015, 2016 and 2017. She will also be classified yet again in 2018. If there is doubt about these swimmers, which clearly there is, then they should be suspended from competition.

Fluid on the brain following a car accident at the age of 5. How this can be called Cerebral Palsy is beyond me. Too many are claiming this disability. Any medical expert knows that Cerebral Palsy is a condition that occurs before, during or immediately after birth. Also another thing everyone may want to take a gander at is all the athletes who are claiming this disability. It’s quite interesting that all the suspect ones are claiming the left side is affected where as all the legit cases are affected on their right side. Think about it.

Sarah he claim it because it’s the easiest to fake, and pretend to have cla hand or limp , we have a new swimmer here in uk is doing exactly that , we also have swimmers now following the top , and saying they are worse and now been put down and is now a record holder , have a look at Megan Richter a class example of being a 9 for about 7/8 years never a limp now she had claw hand and a very impressive limp and was put down yet swam with an amazing kick a fab dive and went an Pb and got records I really hope the net is closing in on the cheats and… Read more »

Yes Shonda, how can Boggioni be an S4? She can dive off the block, stand completely unaided and still for many minutes at a time and walk up a difficult terrain, thus being the podium at Berlin, albeit holding onto someone’s arm. She still uses a chair but I just don’t get how her function puts her into the S4 class. I actually feel sorry for the other italian Trimi, Mexican Miranda Nely, Aus Watson and American Smith because it’s going to be a tough comp for them. No issue if athletes condition changes, it just means they should be reviewed more often I guess, eg I think Trimi will go to a S3 one day etc.