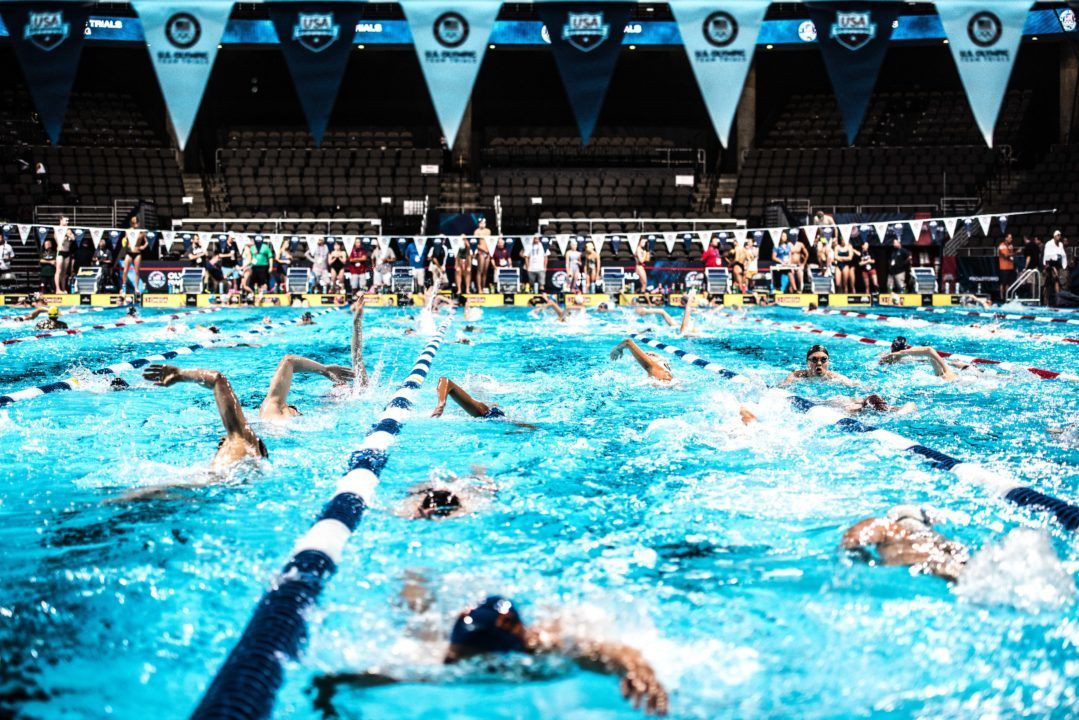 If your child is unhappy, find out why. Make an appointment with the coach and have a conversation. Current photo via Mike Lewis/Ola Vista Photography

14 year-old Thomas Heilman of Cavalier Aquatics shaved 0.02s off of his own National Age Group record in the 100 fly today in Cary, NC.

One of my toughest times as a swim parent was when parents decided to start a new team. I have intense team loyalty and with my glass-half-full attitude, I’d like people to work together to make improvements rather than divide. I don’t think team fractures happen too often, but when it does, there can be chaos and drama for months.

Why do teams split up and new ones form? Sometimes it’s parents or an assistant coach driving the split. Not very often do kids demand a new team. When was the last time you heard a swimmer say, “Mom and Dad, I’m really unhappy with the coaching on my team and I don’t feel like I’m making the progress I should. Do you mind getting a team charter, renting pool space, creating a team logo, ordering new equipment and hiring a coach? Oh, and by the way, do you mind setting up a 501c3 and spearheading fundraising?”

No. That doesn’t happen. If your child is unhappy, find out why. Make an appointment with the coach and have a conversation. If you see something that needs to be changed, then bring it up to the coach or board. Sitting on the deck expressing unhappiness with other parents won’t work out well. By addressing any issues, getting more involved, and volunteering expertise, you may see improvements.

Here are four thoughts about teams splitting up:

Is it in the children’s best interest?

Starting a team to satiate an adult’s ego isn’t the correct reason to split from an existing team. A lot of negativity and rationalizing happen if the decision is driven by a coach or parent with their own agenda. Make sure there’s a valid reason and things can’t be worked out before starting a new team. If your team offers a safe environment, good coaching and your child has friends, then why leave?

Competition can be a good thing.

If a new team does start up, act like a grown up. I’ve seen a lot of bad behavior on both sides and not just one person or team is to blame. Acknowledge there will be hurt feelings and emotions may run high. The existing team can’t be complacent and competition will push them to pursue excellence.

Will your children understand?

If you opt to start a new team, you are involving your children in drama. Why are they no longer swimming with their friends who they’ve bonded with over the years? It’s going to be impossible to shield them from comments, hard feelings, and that awkward moment when they come face to face with their former teammates. Also, switching coaches and coaching styles may interrupt their progress.

Can your community support another team?

If you live in a high population area of more than a million families, then you probably have enough swimmers to support a team. In small towns, it’s a struggle for one or two teams to exist. There aren’t enough families to support high-level professional coaches, and there could be a shortage of lane space. Make sure homework is done first and work through the numbers. It’s a monumental task, and very often new teams struggle and hurt the other team in the process. We want what’s best for our children and swimming.

Have you been through a team split? What were the problems or positives you experienced?

Elizabeth Wickham volunteered for 14 years on her kids’ club team as board member, fundraiser, newsletter

editor and “Mrs. meet manager.” She’s a writer with a bachelor of arts degree in editorial journalism from the University of Washington with a long career in public relations, marketing and advertising. Her stories have appeared in newspapers and magazines including the Los Angeles Times, Orange County Parenting and Ladybug. You can read more parenting tips on her blog.

#4 is a problem in areas with small populations and/or lack of resources. in these situations, usa-swimming fails to protect existing teams by allowing new teams to start. the division of resources (population, facilities, etc) makes it difficult, if not impossible, for long-term development of the sport or the financial survival of multiple programs.

I have to agree that USA Swimming fails to protect but that’s where I take another fork. Over 30 years, I have seen countless examples of a local Board’s overreach, slander, labor law violations, intimidation and gossip. This team has been in existence since the 70s and with the natural turnover of board members, the same mistakes are repeated.

After a particularly egregious labor law violation (the team lost in court), an assistant coach was asked by many swimmers to start his own team. He did so and immediately developed a pro-swimming organization with no fundraising, no volunteering requirement, no fines and no power structure among the parents. This new team has grown into one of the most financially successful… Read more »

A couple of years ago, the team my granddaughter swam for lost its coach, who was very well loved and respected by both swimmers and parents. The owner of the team decided to close the team rather than look for a new coach. So not quite the same as a club splitting. My granddaughter, who was a junior in high school (and at least two other high school aged swimmers) and looking to swim in college, felt as if she had been kicked in the gut and betrayed by the team owner. She has since told us she cried every night for at least two weeks. What an emotional roller coaster as parents tried to figure out what to do… Read more »