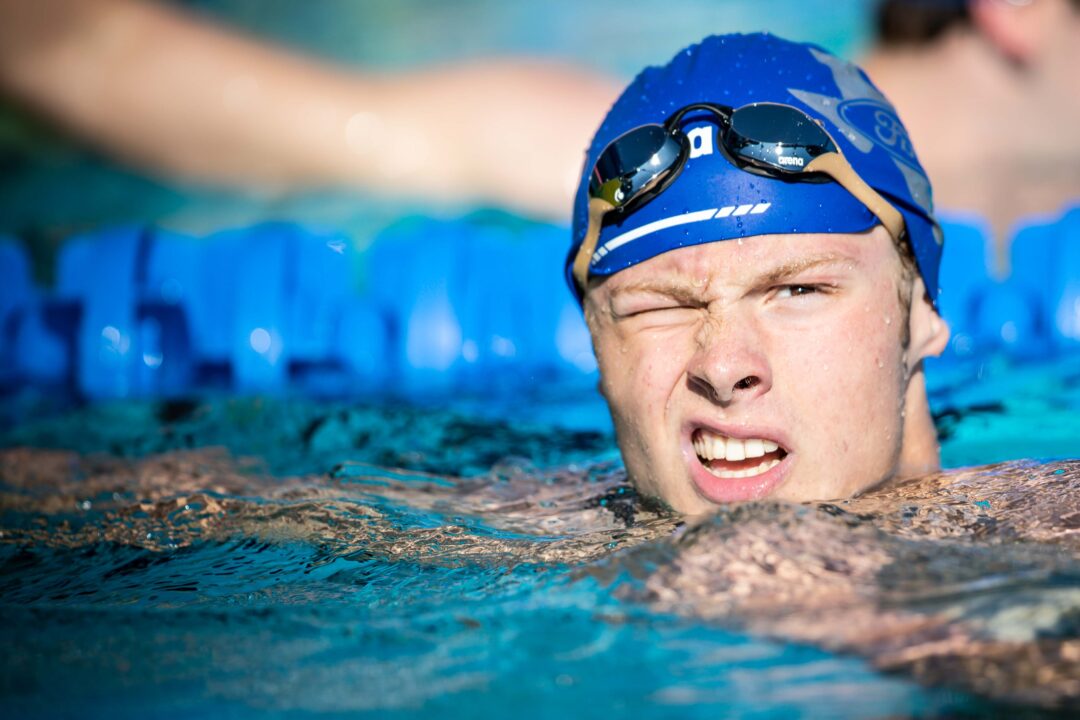 Jacob Wimberly's sub-20 50 freestyle lead-off leg is a swim you may have missed amidst the record-breaking chaos of night 3 of Winter Juniors. Archive photo via Jack Spitser/Spitser Photography

Day 3 of the 2022 Speedo Winter Junior Championships did not disappoint in the east or west. In the east, 15-year-old Thomas Heilman became the fastest ever 18 and under in the 100 fly, clocking a blistering 44.67. Summer McIntosh backed up her relay split from Wednesday night to become the 7th-fastest performer of all time in the 200 free with a 1:40.63. Meanwhile in the west, Katie Grimes threw down a 3:57.02 400 IM, marking the 4th-fastest performance of all time and setting a new 15-16 NAG. Maximus Williamson continued his record-breaking streak, as he set a new 15-16 NAG with a 3:39.83 in the 400 IM, taking down Michael Phelps’ last remaining SCY NAG record.

Here, we will point out a few swims that might’ve gotten lost in all the record-breaking chaos of the night. If there are any other swims you want to shout-out, please do so below in the comments.

Jacob Wimberly from Texas Ford Aquatics threw down a 19.89 lead-off split on their 7th place 200 freestyle relay. Wimberly entered the meet in the 50 free yesterday with a best time of 20.47, which he set last month at the LAC Fall Classic. Yesterday, he swam a 20.16 in prelims and a 20.25 in finals to place 11th.

Wimberly’s lead-off split was the 3rd-fastest of the event, behind only Ethan Harrington who won the 50 free last night, and Diggory Dillingham, who placed 2nd.

16-year-old Michael Gorey from Carmel Swim Club won the C-final this evening in a new personal best time of 3:54.82. He entered the meet with a previous best time of 4:05.58, which he set in October of this year at the CSC Fall Frenzy.

Gorey dropped just over 10 seconds in his prelims alone, as he clocked a 3:55.50 to qualify in 17th place. He returned tonight and dropped another half second to post a final time of 3:54.82, winning the C-final and placing 17th overall. His additional drop tonight came mainly from his freestyle split–he was a 56.30 this morning compared to a 55.71 tonight.

16-year-old Grace Rabb from the Aquajets had an incredible day in the 100 backstroke. She entered the meet with a best time of 54.19, which she set back in March at the NCSA Spring Championships. In prelims this morning, she dropped over a second to clock a 53.04 and qualify in 4th heading into tonight’s final.

In finals, she found another 0.25 to drop leaving her with a final time of 52.97 for 4th place overall. In total, she dropped 1.40 seconds off her best time, and moved up from being the 18th seed to 4th in the event.

16-year-old Katie Christopherson from Swim Atlanta broke through the 1:00 barrier in the 100 breaststroke tonight for the first time. She clocked a 59.91, finishing 2nd behind SwimMac’s Grace Rainey by two tenths.

Christopherson is committed to Virginia for their class of 2028.