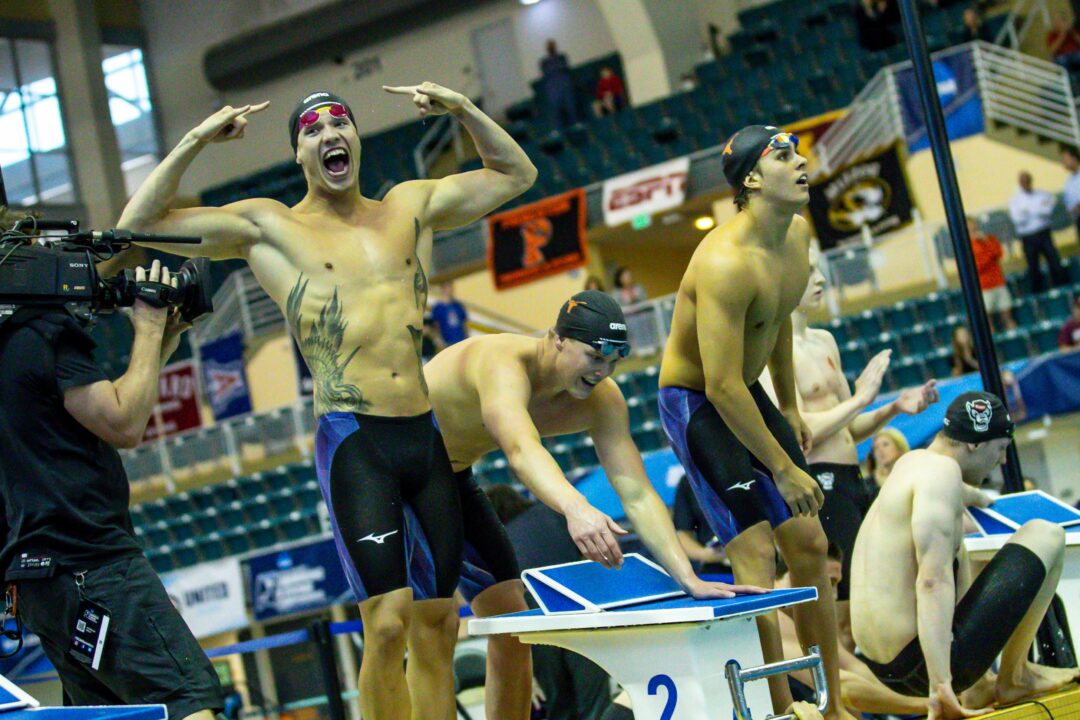 Texas senior Drew Kibler led off the record-breaking 800 free relay in 1:30.54, which was the fastest first leg of the night. Current photo via Jack Spitser/Spitser Photography

Harvard’s Dean Farris blasted off in heat 2 of the medleys with a 20.36 backstroke leadoff, setting the Crimson off for a heat win by 1.2 seconds. In the very next heat, that eye-popping swim was bettered by both Cal’s Bjorn Seeliger and NC State’s Kacper Stokowski, who clocked a 20.08 and a 20.16, respectively. Adam Chaney led off the Florida relay in the final heat with 20.19. Seeliger, Stokowski, and Chaney all topped Ryan Murphy’s record of 20.20 and now rank first through third on the all-time list. Farris moved up to seventh. Louisville’s Nic Albiero (20.59) and Alabama’s Matthew Menke (20.60) became the 11th and 12th-fastest 50-yard backstrokers of all-time.

All told, eleven backstrokers broke 21 seconds and fully ten of the 12 fastest 50 backstroke leadoffs of all time were swum tonight.

In the breaststroke where five swimmers went under 23 seconds, Caspar Corbeau of Texas led the field with 22.55. He made up a .46 deficit to pass Florida and take over the lead at the halfway point in the final heat. That ranks him second all-time behind Max McHugh’s 22.40. Alabama’s Derek Mass (22.80) and Carles Coll Marti of Virginia Tech (22.98) were also in that final heat. USC’s Trent Pellini split 22.69 and Cal’s Liam Bell swam a 22.71 in the previous heat.

Eleven butterflyers, led by Eric Friese of Florida, cracked the 20-second barrier. Friese tied Joseph Schooling for the fastest-ever split with 19.36. Stanford’s Andrei Minakov, who had already owned the second-fastest split of 19.49, improved his time to 19.42 and now ranks third behind Schooling/Friese. NC State’s Nyls Korstanje joined the top-10 all-time with a 19.55. Michigan’s Gal Cohen (19.77) and Wesley Ng of Georgia (19.79) were also under 19.8.

Florida’s Will Davis swam an 18.38 to hold off Auchinachie in the final heat and secure the win for the Gators. Ohio State’s Sem Andreis (18.46) and Virginia Tech’s Youssef Ramadan (18.61) were also in that heat. Arizona State’s Grant House anchored with 18.47 to finish third in the previous heat behind Cal and NC State.

Drew Kibler put Texas out front in the final heat of 800 free relays with a 1:30.54 leadoff leg. Florida’s Kieran Smith was close on his tail with 1:30.66, and Matt Sates of Georgia was only another .12 behind Smith in the same heat. The trio were the only sub-1:31s of the 25 leadoff swimmers.

We were expecting to see a quite a few more 1:29 rolling splits than we did this year. Only American record-holder Dean Farris of Harvard and Arizona State freshman Leon Marchand, a relative newcomer to yards, broke the 1:30 barrier with their respective splits of 1:29.85 and 1:29.96, respectively. Farris swam the second leg for Harvard, taking them from fifth at the 200 to first at the 400 in heat 2, but Ohio State eventually got the heat win. Marchand took ASU from eighth to fifth in the final heat with his 1:29.9.

“ten of the 12 fastest 50 backstroke leadoffs of all time were swum tonight”. Wow… WOW… WOW!!! This meet is already more electric than I could ever dream of

so who is the post-race interviewer on the stream who is just yelling into the microphone?